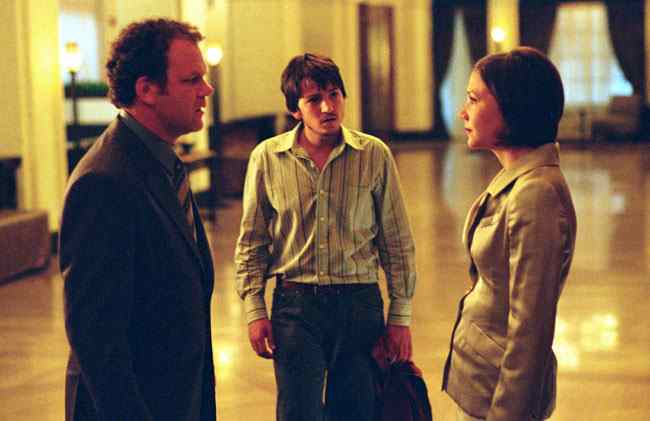 Rodrigo (Diego Luna) enters a casino, takes a seat and orders a drink. He only has a $100 bill and the waitress reluctantly agrees to make the change. Suddenly, he “remembers” his change from a taxi ride and he pulls off a fast handed con game. Emboldened, he tries the same trick on another waitress but she is wise to his con. She shouts for Security but before they can take control of the situation, a local cop intervenes and hustles the hustler out the door. But, Richard Gaddis (John C. Reilly) is not a cop but a con man, too, who makes Rodrigo a one-time proposition in “Criminal.”

In 2000, Argentine helmer Fabian Bielinsky created a slick little crime caper called “Nine Queens” about an ambitious conman who tries to have it all as he makes a once-in-a-lifetime hustle that could set him up for good. Frosh writer/director Gregory Jacobs (who has had a long career as first and second assistant director starting, early on, with “Miller’s Crossing” and “Little Man Tate”) has taken, as his first foray into making feature, Bielinsky’s work and turned it into a Hollywood-lite version of the original. Virtually a blow-by-blow remake of “Nine Queens,” “Criminal” makes the story of cons, deception, retribution and debacle acceptable to English-speaking audiences that don’t have the patience for subtitles. Unfortunately, the original is a better, earthier film that shows a great deal of talent and style by its maker, Bielinsky. They say that imitation is the highest form of flattery and Jacobs’s scene-by-scene recreation certainly flatters. The remake is appealing in its imitation and will help, hopefully, make Bielinsky recognized as a potent filmmaking force. I recommend “Nine Queens” to the more experimental filmgoer but that’s not to say that “Criminal” is not worthwhile. John C. Reilly has always been a favorite character actor and his portrayal of con artist Richard Gaddis puts another notch in his belt of fine performances. Richard is ambitious, outwardly prosperous and desperately looking for the big con. After he rescues Rodrigo, Gaddis is presented with a one-time deal by old forger, Ochoa (Zito Kazzan), who has toiled for over a year on the duplication of a rare American currency note. International entrepreneur William Harrigan (Peter Mullan), an avid collector of rare monies, must leave the country and is a prime candidate to foist the fake bank note on. This who-is-conning-whom film uses a flashy premise, gritty dialogue and a gang of good performers to make it a worthy imitator of its source material. Reilly does a fine job as a career con artist and mentor to Rodrigo while never giving up the opportunity to pull off yet another scam, no matter how minor the gain - at one point he randomly selects a kindly old woman as his impromptu victim. Diego Luna (he is an awfully cute little guy) is suitably aw-shucks charismatic as the very likable Rodrigo. Supporting cast is minimal but does a decent job of reprising the “Nine Queens” characters. Maggie Gyllenhaal, as Richard’s put upon sister, Valerie – he is trying to con her and younger brother Michael (Jonathan Tucker) out of their rightful inheritance – does a deft job of showing both mistrust and filial loyalty to her older sibling. Peter Mullan lends an appropriately moneyed arrogance as the wealthy, self-indulgent financier, Harrigan. Jonathan Tucker is almost vacuous as the innocent naïf, Michael. Veteran cinematographer Chris Menges lends his experienced hand with his fast-paced, fluid photography, giving the film a docudrama you-are-there feel. Costume (Jeffrey Kurland) and production design (Philip Messina) are subtle and well done. I have to give “Nine Hearts” the edge but “Criminal” is an honest remake of its source material.