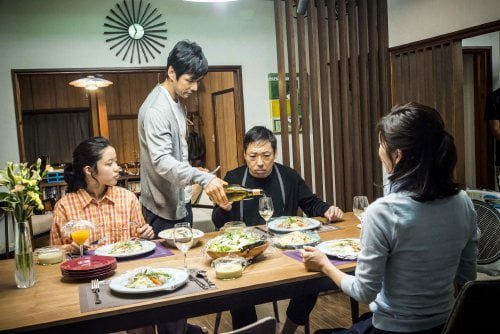 Koichi Takakura (Hidetoshi Nishijima, "Dolls") and his partner Nogami (Masahiro Higashide) dealt with a number of serial killers before one stabbed him during an escape attempt. A year afterwards, Takakura has a new career as a professor of criminal psychology and has just moved into a new home away from city life. His wife, Yasuko (Yûko Takeuchi, "Ringu"), is anxious to make friends with the neighbors, but Mrs. Tanaka says she and her moaning, bedridden mother 'don't associate with people around here.' The house in between the Takakuras and the Tanakas appears to be under constant construction and when Yasuko meets its owner, Nishino (Teruyuki Kagawa, "Tokyo!," "Tokyo Sonata"), she tells her husband he is "Creepy."

Japanese director Kiyoshi Kurosawa ("Tokyo Sonata") returns to his horror roots with another exploration of societal ills. Weaving together two narratives which gradually converge, Kurosawa keeps turning the screws, aided by a deliciously unsettling performance from Kagawa. After teaching a class on the three types of serial killers (organized, disorganized and mixed characteristics), Takakura asks colleague Okawa (Masahiro Toda, "Cure") what he does in between classes. Glancing at the man's crime research, Takakura is intrigued by the unsolved case of the disappearance of a family except for one of the two children, a junior high school girl. Against his better instincts, Okawa convinces him to visit the site. Takakura refuses to go in, sensing something very wrong. Meanwhile Yasuko revisits the Nishino house in a second attempt to deliver chocolates. This time a strange, childlike man comes to the gate. He's hostile, then intrigued by the gift ('Are these those expensive chocolates that cost 1,000 Yen a piece?'). But when their dog, Max, runs to Nishino during a walk, Yasuko discovers an entirely different man. He's friendly and apologetic and introduces her to his daughter Mio (Ryôko Fujino), just returning from school. Then Yasuko mentions his wife and Nishino gets weird again. But Mio is an engaging sort and Takakura comes home to find Nishino and Mio in his home, Yokasura teaching Mio how to cook. At university, Takakura's surprised by an unwelcome visit from Nogami, who has somehow heard about him visiting the crime scene house. The two return and are surprised to find a young girl there who turns out to be Saki Hondi (Haruna Kawaguchi), the survivor who kept giving the police different stories. She eventually agrees to talk to Takakura and gradually remembers locking eyes with an odd neighbor. On his way home on the train, Takakura spies Nishino, locking eyes with him. The run ins and meetings among the various players continue as bodies, decomposed and freshly killed, begin to turn up. Kurosawa, who adapted Yutaka Maekawa's novel with Chihiro Ikeda, lays his groundwork early, layering clue upon parallel clue. There is an underlying theme of isolation. People shun their neighbors or, as in Takakura's case, become so involved in work their home life suffers. When bodies begin to turn up, the imagery is startling, flesh encased in vacuum sealed bags. Nishino is the ultimate oddball, clad in tight, cropped trousers flashing mankle, alternately friendly and socially inept (Kagawa's command of Nishino's shifting demeanors is scarily impressive). The film is almost a negative film noir, white slats holding back bright greenish light in institutional buildings. Local geography and architecture play into Kurosawa's vision, the footprints of homes, part of the plot, characters frequently 'caged' behind bars, railings and window casements. As "Creepy's" central mysteries are revealed, Kurosawa goes to darker and darker places, his themes solidifying as his plot almost goes off the rails. After 130 minutes, you may not be satisfied with how it all plays out, but it should have a hold on you nonetheless. The KimStim DVD has no extras other than the trailer, but is presented in its original 2:35:1 aspect ratio in a sharp looking transfer. Grade: