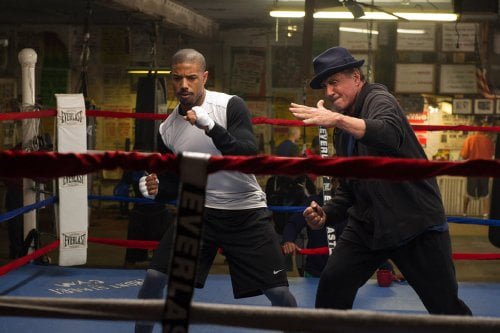 When young Adonis Johnson (Michael B. Jordan, "Fruitvale Station") receives a surprise visitor in juvie, it happens in lockdown because of the fight he was just in, defending his momma. But the woman who's come to visit is Mary Anne Creed (Phylicia Rashad, TV's 'The Cosby Show,' wonderful), widow of the boxing champ. She gives him a home and education, but also the name of the father he never knew - "Creed."

Indie writer/director Ryan Coogler reteams with his "Fruitvale Station" star with an unexpected punch - reviving the "Rocky" franchise. Featuring stunningly shot fight scenes, one in one uninterrupted take, "Creed" is not only a crowd pleaser but Stallone's second comeback as the character who put him on the map. Jordan is mighty fine as the young self-taught fighter with self worth issues, but it's the old action star, slipping right back into his creation's skin with humility and humor, who is "Creed's" beating heart. Although Mary Anne has paved Donny's way into a blue collar financial career, he's been slipping down to Mexico where he's been winning in the ring. Despite his 'mama's' admonitions, Donny quits his job in L.A. and moves to Philadelphia with an eye on his dad's old friend Rocky Balboa as a trainer. Restaurateur Rocky, still a Philly favored son, wishes the kid all the best, but claims he's done. The kid's persistent, though, and not too much later, 'Unc' shows up at Mickey's Mighty Boxing Gym, where his mysterious support of 'Hollywood' piques owner Pete Sporino's (Ritchie Coster, "Let Me In") interest. He's thinking sparring partner for his fourth ranked son Leo, but Rocky thinks Donny could go the distance. The screenplay, cowritten wth Aaron Covington, follows the "Rocky" formula with its downtrodden fighter scrambling for the brass ring with an old school old guy by his side. There's romance in the form of neighbor Bianca (Tessa Thompson, "Dear White People"), a local singer with progressive hearing loss and the potential to 'weaken legs.' There are the training montages, this time featuring chickens and mirrored shadow boxing. There is the mismatch of Donny against current, intimidating champ 'Pretty' Ricky Conlan (three time ABA Heavyweight Champion Tony Bellew) and the low key entrance to the Las Vegas ring versus Conlan's flashy, fire eating introduction. The gifted robe is now a special pair of shorts. And is that Cuff or Link the camera pans to? But "Creed" also has the hope of youth cast against loss - Creed's with his father, Rocky's with Adrian, Mickey and Paulie. There's something just lovely watching Stallone with his stingy fedora, foldup chair and newspaper, whether he's visiting graves or monitoring Donny's reps. While Stallone neither wrote nor directed here (he is a producer), dialogue features vintage Rockyisms ('I used to do that with one hand. I didn't want to say anything though') Jordan and Stallone have a push/pull magnetism, their growing affection palpable. The production features the new in L.A., where Creed's widow lives in a gated estate, and the old streets of Philly, Balboa in a familiar, shabby old attached brickfront. Fight scenes are thrilling, Donny's first with Balboa in his corner done in one amazing shot which captures inside the ring and the spectators outside of it. The climactic fight makes us feel the blows, the camera hovering behind the punch or craning into the two opponents, with quick shots of blood splatter hitting the canvas (cinematography by "The Wrestler's" Maryse Alberti). Ludwig Göransson's score is also notable, the old interwoven into something all its own, including original songs like 'Grip' performed by Thompson. "Creed" isn't the equal of "Rocky," Stallone's original, film having captured lightning in a bottle. Coogler, though, has shown himself capable on both ends of the filmmaking spectrum and his loving resuscitation of a beloved yet battered franchise is reason to cheer. Grade: