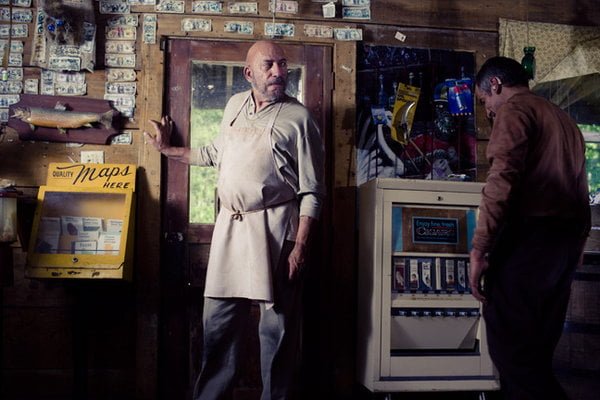 Three couples road trip to the Bayou to camp and take a detour to 'the house that Grimley built,' when Oscar (Dillon Casey) spies a flyer at Chopper's (Sid Haig, "The Devil's Rejects") roadside gas stop and remembers the legend from his childhood. He tells his friends the legend of the man who went mad when he lost his sister-bride to an albino alligator and mutated into the "Creature."

The only possible reason this inept horror flick has made it to the big screen is the ability to trade off on the names of genre favorites Sid Haig and Pruitt Taylor Vince on the poster. Production designer Fred Andrews makes his directorial debut here and can't even manage coherency. The filmmakers tell us all we need to know before the credits come up when a woman strips for a full frontal to go skinny dipping in swamp waters infested with gators. The story, written by Andrews and Tracy Morse, is a mix up of Texas Chainsaw hillbillies, Bayou mutated incestuous devil worshipers and sinkholes. Yes, sinkholes. (They're mentioned nonsensically early on and then crop up for an even more nonsensical climax.) Mehcad Brooks ("Just Wright," 'True Blood's' Eggs) isn't bad as the heroically in love Niles and "Red, White & Blue" castmates Lauren Schneider and Amanda Fuller do what they can with the material, but everybody else overacts or is wasted. Haig recycles and downshifts his Captain Spaulding and Taylor Vince wanders about mumbling. The film has no spatial intelligence (monster's in the house then deep in the woods), a character is shot then appears fine, a whole bunch of people show up out of nowhere for the climax and disappear just as readily. Chopper's gasless gas station is nicely art directed and the musical score occasionally throws in some authentic Cajun sounds when its not trying to make us jump over nothing. But overall, "Creature" is ready made for the MST3K treatment.