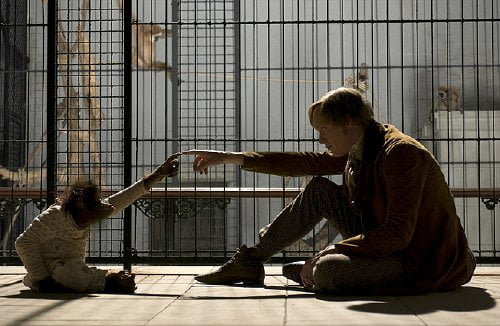 Charles Darwin (Paul Bettany) turned the scientific and religious communities on their respective ears in 1859 with his revolutionary and, to many, heretical work, The Origin of Species. The controversy was not just public, though. It also causes a rift between man and wife as devout Emma Darwin (Jennifer Connelly) opposes her husband’s radical theories about “Creation.”

In the middle of the nineteenth century, scientist Charles Darwin's (Paul Bettany, "Master and Commander: The Far Side of the World," "The Young Victoria") life work, examining species over millions of years, was leading him in two different directions. The book that would be published in 1859, "The Origin of the Species," is one of the most ground-breaking new concepts in human history. But the conclusions Darwin came to negated the existence of God and he struggled with his loss of religious faith as he questioned everything about the inhabitants of Earth's "Creation." This drama, adapted by John Collee ("Master and Commander: The Far Side of the World") from the Randal Keynes (Darwin's great, great-grandson) book "Annie's Box" and directed by Jon Amiel ("Sommersby," "The Core"), has gotten an unfair rap coming out of the Toronto Festival as an inert biopic. Perhaps coming to it with lowered expectations helped, but "Creation" has much to offer, including a terrific performance from Bettany with strong support from his real life wife Jennifer Connelly ("House of Sand and Fog") as Darwin's wife Emma, a difficult role Connelly navigates expertly. Amiel and Collee's only misstep is affording the loss of the Darwins' eldest child, Annie (Martha West), not only too much central focus but a focus that is sometimes ambiguous in what it is saying about Darwin's feelings about his child. When we meet Darwin he is in poor health and disinclined to publish his findings. Emma is upset to learn that they will be visited by his fellow scientist Joseph Hooker (Benedict Cumberbatch, "Starter for 10," "Amazing Grace"), as she her strong faith causes her to reject her husband's theories. Hooker brings along Thomas Huxley (Toby Jones, "Infamous," "W."), who enthusiastically tells Charles "You've killed God, Sir" - just the notion that has kept Darwin from completing his book for publication. In flashbacks we see Darwin with Annie. As a baby, he used her as a test subject, noting her reaction to mirrors (self awareness being a high IQ signifier) and frightening noise, yet doting on her nonetheless. As a young girl, Annie is extremely interested in her father's work and very matter of fact about it (a young sister becomes hysterical at seeing a fox attack a hare, but Annie explains it as 'the natural order of things). Annie's favorite story is that of Jennie, a young orangutan captured and displayed at the London zoo which Darwin met and marveled at. But when Annie asks, smiling, 'Tell me about the part when she gets sick and dies...I like it, it makes me cry,' her father reacts with horror and the filmmakers are unclear whether he is reacting to his daughter's behavior or what happened to Jennie herself (which we do not learn of until film's end). It's a nice touch that Annie often 'grooms' her father, stroking his hair, etc., ape-like behavior. Eventually, several cathartic events occur which spur Darwin to finish his work and he leaves its publication in his wife's hands. Emma stays up reading all night and finds herself convinced. Although the film concludes with a touching parallel between Annie and Jennie, it is this thread - the evolution vs. creation conflict within Darwin and his marriage - that is the real drama of "Creation." Bettany plays Darwin over decades and is convincing as a healthy young father and frail older scientist. Intellectual curiosity is balanced with a revulsion at 'the battleground of nature,' which become Darwin's nightmares in a couple of stunning time-lapse sequences that echo waking story lines. Connelly's Emma could have come across as an uncompromising religious zealot, but although the importance of her faith is integral to the character, she maintains sympathy as open-minded for the time (she engages in sports on the beach with her children) and as a conflicted mother (in a terrific scene with Bettany in which they confess their inner thoughts on Annie's death). Young West doesn't give much shading to Annie, contributing to that strange scene discussing Jennie, but adult support is good if unexceptional. Jeremy Northam ("An Ideal Husband") is the Darwins' friend and pastor Reverend Innes. Jim Carter ("The Golden Compass") plays Darwin's loyal servant Parslow. "Creation" will undoubtedly stick in the craw of those who take its name as their ideology and it is unfortunate the film didn't delve more into the scientific facts upon which Darwin based his evolutionary theories, but it is a nice looking film whose stars convey with deep emotion the conflict between the two.

Director Jon Amiel and screenwriter John Collee adapt the biography, by Randal Keynes, to show the later years of the famous evolutionist, Darwin. Starring real life husband and wife, Bettany and Connelly, the film studies the affect that Darwin’s seminal work had on a planet gripped in the religious fervor that believed the world to be just 6000 years old and that God created the universe, Earth and man in 6 days. Darwin, whose studies of the Galapagos Islands aboard the HMS Beagle in 1831 became the basis for Origin, stood that world upside down with his evidence that Earth is billions of years old and man has been around a lot longer than 6000 years. The notoriety of Darwin’s shocking theories of natural selection and the Creation hits home as Emma is offended by the ideas put forth by her forward thinking husband. The tensions created by the rift of ideology affect their marriage dangerously. However, “Creation” is not just about the creation. It is also a love story about a man and wife whose opposing views tests their long, loving marriage. Nested within this familial conflict is the father/daughter relationship with Charles’s eldest, Annie (Martha West), and how he copes with the grief of his loss of her when she was young. Bettany and Connelly give effective, believable performances and is the key to making this both a good character study and an epic philosophical debate. The supporting cast, including Jeremy Northam and Toby Jones, flesh out the debate over the Darwin controversy, both pro and con. “Creation” looks and feels its period as it flashes back and forth from the older to the younger Darwin couple. Collee’s screenplay weaves this present/past story deftly and clearly, giving a fully realized biography with a true romance thrown in. This is good fare for discerning audiences seeking a mature and entertaining film.