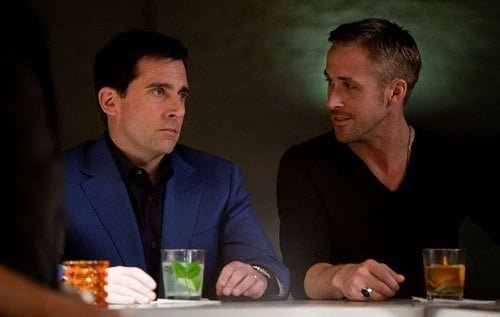 At dinner with his wife of almost twenty-five years, Cal (Steve Carell) is shell-shocked when he asks her what she wants and her reply is 'a divorce.' But even as he continues to pine for Emily (Julianne Moore), Cal is remade into a ladies' man by Jacob (Ryan Gosling, "The Notebook," "Blue Valentine"), a younger man who takes an interest after listening to Cal drowning his sorrows night after night at a local club. Back at Cal's former home, his son Robbie (Jonah Bobo, "Zathura: A Space Adventure") is experiencing the pangs of first love for an older woman who just happens to have a crush on an older man and three generations ping pong off each others' expectations of "Crazy, Stupid, Love."

In their last film, "I Love You Phillip Morris," directors Glenn Ficarra and John Requa had difficulty modulating tone and under editing the content of their own script. This time out in a larger commercial arena, the directors take Dan Fogelman's ("Bolt," "Tangled") script and manage to smooth out its flaws with their great cast and good pacing. But those flaws aren't entirely hidden and the more one picks at them after the fact, the larger they loom. Carell delivers another of his patented 'nice guy in loser package worth giving a chance to' performances that he begat in "40 Year-Old Virgin" and continued in "Dan in Real Life," his best mode when not on 'The Office' or voicing the despicable Gru, but the film's real secret weapon is Ryan Gosling's loosey goosey comedic debut and young Bobo's strong subplot. There are over a half a dozen love connections going on here, mostly the unreciprocated kind. When Cal and Emily reach home (after Cal's thrown himself out of their moving vehicle), he announces their split to babysitter Jessica (former pairs skater Analeigh Tipton, "The Green Hornet"), who we've just learned is the object of Robbie's desire while her crush on Cal escalates when she sees his pain. As we see Cal go down, we're also introduced to Hannah (the ubiquitous Emma Stone) going up, career-wise anyway. Hannah's expecting a proposal from the dull-as-dishwater Robert (Josh Groban, continuing his self-deprecating comedy cameos) while her best friend Liz (Liza Lapira, TV's 'Traffic Light') would die to get the attention Hannah receives - and rejects - from sexy player Jacob. Meanwhile, Jacob gives Cal a makeover and wingman status, then pushes Cal out of the nest into the arms of Kate (Marisa Tomei), a teacher he wins over with his no-holds-barred honesty. Emily is uncomfortable with coworker David Lindhagen (Kevin Bacon), the man she cuckolded Cal with, and seems to be sitting on the fence. Hannah finds out that Robert's graduation surprise isn't a ring but a job offer in his law firm and drunkenly fetches a more-than-willing Jacob. Robbie's eighth grade public protestations of love to the sixteen year-old Jessica are met with embarrassment but she's not too shy to take nude photos of herself to get Cal's attention. With the exception of Tomei, who should have been reined in by the directors (a problem they also exhibited with Carrey on their last film), the cast is uniformly excellent, right down to Lapira's shallow championing of hotness. Casting has even done a good job of making children look like a cross of the actors who play their parents. If only the screenwriter hadn't felt the need to make three of his characters turn out to be 'surprises' with unexpected connections to other cast members. That Jessica turns out to be the daughter of Cal's neighborhood buddy Bernie (John Carroll Lynch, "Zodiac," "Paul") isn't such a big deal, but the last surprise relationship is so scrupulously avoided it's overworked and unbelievable, all for that small 'gotcha' (didn't anybody ever hear about Hitchcock's theory of suspense that the bomb which is seen is more effective?). Then there's that really questionable recipient of Jessica's nude photos at film's end. The film has other flaws, like the usual economic imbalances between people's seeming professions and their lifestyles, school functions which only exist in Hollywood (a dad taking over an eighth grade salutory speech???) and one egregious bit of product placement (John Carroll Lynch practically holding a Macy's bag in front of his face). We're also supposed to believe that Cal would be transformed into a Jacob level lady killer after one one night stand, even though later we hear his sexual prowess wasn't all that smooth. It's those first two, though, which are just so wrong and would have been so easily remedied. But the film gets more right than wrong, mostly because it has real heart and likably flawed protagonists. We see Cal sneak back to the old homestead at night to stealth garden, fearing Emily won't be doing it. When she calls him from inside with an obviously falsified claim that she doesn't know how to reignite the water heater, the directors capture some real tenderness using a device that goes back to Shakespeare. Hannah and Jacob's 'remeet' cute is plenty amusing and includes Jacob's back story, which we don't get via his relationship with Cal but which helps explain it. The filmmakers may borrow a bit from the French film "Heartbreaker," but it works and Stone's giggly quirkiness bounces well off of Gosling's aloofly amused sexiness. Cal's makeover is well handled, from subtle and realistic changes in hair and clothing to the repartee between Carrell's everyday uncoolness (a Velcro wallet!) and Gosling's tough love face slaps. The Sazerac may see a rise in popularity from this film as Jacob's drink of choice, another nice detail. There's also an amusing "Easy A" in-joke when Robbie uses a class on 'The Scarlet Letter' to rebel, then to woo Jessica. The obstacle which must surface in every rom com when the two who are meant to be together must be forced apart doesn't seem as contrived as usual here, due to some nice writing ('I wasn't trying to show you. I was trying to move on.'), well delivered by Carell. There are a few other nits I could pick, but Ficarra and Requa have progressed so well over their last film and done such good sleight of hand distracting their audience from the flaws Fogelman should have worked out that it's preferable to point out the good. "Crazy, Stupid, Love." is far from perfect, but the soul mates which Fogelman believes in never really are either - great chemistry just makes them seem that way. Still, the film could have been so much better.