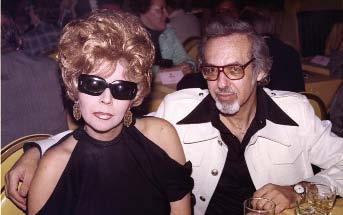 During the less sexually permissible times of the 1950's, wealthy, thirty-year-old lawyer Burt Pugach met twenty-year-old Linda Riss and became obsessed, but when she learned he was married she was devastated. Linda refused to see Burt anymore unless he obtained a divorce. When he failed to buy her a ring, Linda became engaged to another man, but if Burt couldn't have her, no one would, and with a violent, disfiguring act that made tabloid headlines worldwide, Burt showed what he felt for Linda was "Crazy Love."

Writer/codirector (with Fisher Stevens) Dan Klores fell upon a mention of this story, which he remembered from his childhood, and decided to pursue it as a documentary. Good idea, but what sounds like a fascinating and sensationalistic subject doesn't make much of an impression due to so-so execution and unsympathetic subjects. As one interviewee states, Burt Pugach is probably the 'worst psychopath not behind bars,' yet his former(?) victim, current wife Linda, has become his enabler. That actually still sounds like two interesting psyches to probe, but Klores isn't able to capture the Linda of the 1950's in any meaningful way and the Linda of now, while not a blushing violet (Klores emphasizes that she's a 'dame' in the press notes, and one doesn't get the impression he means in the royal sense), appears to be a woman whose only motivation is financial security. Klores does the obvious - keeps his subjects apart in separate interview sessions so as to make latter developments seem all the more astonishing. Linda describes her time with Burt in a way that will recall the fascination Karen held for Henry Hill in 'Goodfellas' - meeting stars, a swank lifestyle - without the sexual attraction. Burt describes Linda as looking like Liz Taylor and says he 'had to have her.' This doesn't sound anything like love, crazy or otherwise. It is kind of interesting watching Burt dig his own grave in his talking head scenes. He's not very convincing when he recounts how severely retarded his baby with his first wife, Francine, was, then limply declares how much he loved her. That child was part of his woes, which included a county investigation into his law firm. Finding out Linda was engaged to another man, we are supposed to believe, was the final straw that justified his horrific action - hiring someone to pose as a messenger, then throw lye into his beloved's face. Burt was convicted for the crime, but when he was paroled early, fourteen years later, he began to propose to Linda during televised interviews. She married him within the year. When we see the couple together there is no real indication as to why. If anything one walks away from "Crazy Love" with a shrug and the feeling that they deserve each other. If this sounds harsh, bear in mind that Pugach begins to repeat his prior behavior with another woman - and Linda's there to bail him out. Klores never succeeds in making these outrageous turns of events all that surprising and "Crazy Love" feels like obsession that's been warmed over once too often.