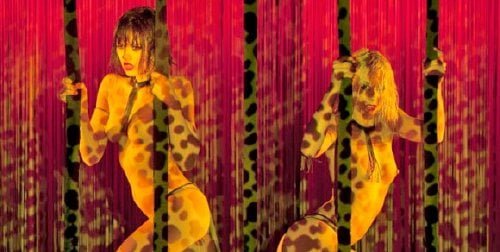 The famous Le Crazy Horse de Paris cabaret opened its doors in 1951 with the promise of creating the best nude dance show in the world. 60 years later, the club has kept that promise and documentary filmmaker Frederick Wiseman delves into the day-to-day life, with beautiful young naked women dancing, of the “Crazy Horse.”

Since his dramatic directorial debut with 1967's ground-breaking "Titicut Follies," Frederick Wiseman has released one of his distinctive documentaries almost yearly. Now, at the age of 82, Wiseman releases his 40th feature and it may be his most titillating yet. Following his template, the director makes quiet, controlled observations about his subject during a period of time which creates a story. In this instance, it was the development of a new show by director/choreographer Philippe Decouflé, the designer of the 1992 Winter Olympic Games Ceremonies, in a Parisian institution known for its artful nude dancing, "Crazy Horse." Wiseman is a director who likes to study process, places and institutions rather than any specific person or event. After past works on a store, a racetrack, the public welfare system, high school and Central Park among others, he has recently become fascinated with the movement of the human body in such films as "Ballet," "La Danse" and "Boxing Gym." Wiseman's films tend to run long and may seem like a chore going into them, but his talent is to pull the viewer right inside of whatever subject currently engages him and he should find a big audience to follow him into Le Crazy Horse Saloon. It will also be a revelation to anyone who regards the place as a high class strip joint. Yes, the dancers are often partially or almost completely nude, but Decouflé, working with his obsessive, chatty art director Ali Mahdavi, works on a cinematic level that is like watching something by Stanley Kubrick crossed with Cirque de Soleil and Bob Fosse. Colored, patterned lights are projected onto the dancers, back lighting accentuates and creates shadows, mirrors add mind blowing physical distortion and props interplay with projections to create something else yet again. In perhaps the show's most literal number, a class strip tease of stockings and black spandex to burlesque music, a screen allows us to only see the lower half of the dancer's body. Later, colored screens produce an animated split screen effect. A sci-fi piece which begins as a solo and ends as a duet is more "2001" than "Barbarella." A number called 'Baby Buns' uses bright pink spots for a 'Hello Kitty' prism onto the nude female. If only Wiseman (and, one guesses, Decouflé) didn't save the worst number, a cheesy, glittery Vegas routine featuring the girls' own, flat vocals, for last. But then again, he's bookended his film with some truly jaw-dropping shadow puppetry performed by one of the club's two male dancers (who, in a tap dance routine in the club's lobby, recall the twins of "The Shining"). Simple shadows and hand dancing whip up the club's namesake at the beginning, an elaborate cat and couple kissing to close. In between the dance numbers, which we see in rehearsals and finished form, Wiseman roams backstage. The dancers gather to laugh at a ballet bloopers tape. We learn that the girls are most reluctant to touch on stage, fearing a perception of lewdness which makes them feel dirty. Outdoors, we are grounded in a very nice area of Paris. Indoors, cloth covered tables great locals and foreigners alike (Wiseman acknowledges the global audience with cutaways to exit signs in three languages.) Tourist photos are manipulated into their most pleasing form (oddly, this and the setting out of champagne buckets are the only real nods to commerce, the high cost of entry is left unnoted). The costumer meets with a dancer, then negotiates with the rest of the creative team. Local media are courted. "Crazy Horse" is both obviously a Wiseman film and yet not exactly typical with its impish appreciation of the female form presented directly as artsy entertainment. This is the filmmaker's first film shot in digital and may be the first declined by public broadcasting.

Frederick Wiseman’s last documentary, “Boxing Gym,” took us into one such establishment and, with typical cinema verite style, gave us a day in the life of the athletes, moms, dads, trainers and all the rest who frequent the Austin Texas gym of the title. With little beside ambient conversations and the director’s roving cameras, the result is a fascinating, quiet, film study. The veteran helmer gives the same intensity, with a huge surge in artistry (thanks to the folks at Le Crazy Horse), as he delves into, first, the beautifully choreographed and visually designed erotic dances, with the above mentioned beautiful young naked ladies. But, as stunning as the dances are, there needs to be more than just that to fill 2+ hours – although, Wiseman gives his viewers the best seats in the house to watch the imaginatively choreographed dances performed by the lithe and graceful dancers of Le Crazy Horse. Once our titillation of watching beautiful naked ladies dancing wears off a bit, Wiseman turns our attention to the details of “putting on a show” twice a day (three times on the weekends), seven days a week. Where the dancers show their remarkable athletic and artistic abilities, those behind the scenes – costume designers, seamstresses, hairdressers and wigmakers as well as the creators of the show – display equally remarkable skill and ability to make it all beautiful and desirable. After all, the name of this particular show is “Desir.” I like short, concise films and, when presented with a 2+ hour documentary, even by Frederick Wiseman, tend to roll my eyes. By the end of “Crazy Horse,” I was still rolling my eyes, but in appreciation of the fine work (not just “Crazy Horse,” but the rest of his phenomenal body of work, too) by this decades-spanning documentary filmmaker. Wiseman brings us into Le Crazy Horse (where a bottle of fine French champagne is chilling at each table and a night out for two runs about 300 Euros (approximately $400.) You may not get the champagne, but a ticket to see this at the theater puts you in the front row.