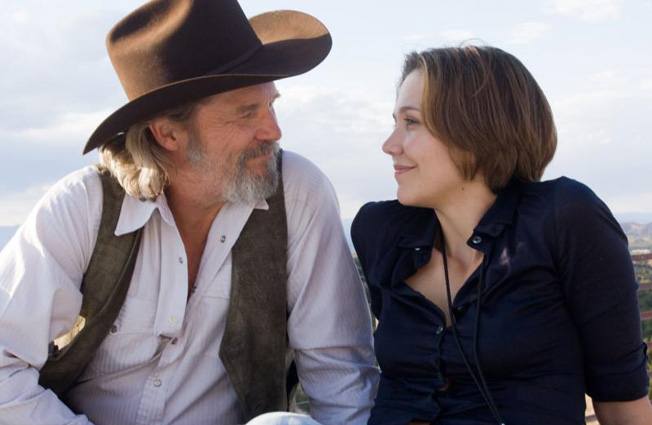 Country singer Bad Blake (Jeff Bridges) has seen better days. Once a small-time celebrity, his life now consists of playing gigs in bowling alleys and drinking copious amounts of whiskey. He is heading nowhere and has nothing to look forward to until a pretty reporter, Jean Craddock (Maggie Gyllenhaal), asks to interview him in “Crazy Heart.”

At fifty-seven, Country and Western star Bad Blake's (Jeff Bridges, "Iron Man," "Men who Stare at Goats") better days are behind him. Relegated to playing off-the-beaten track saloons and bowling alleys, Blake is broke and resentful of his protégé, Tommy Sweet (Colin Farrell, "In Bruges"), now rich and famous with one of Blake's standards in his repertoire. But at a stop in Sante Fe, journalist Jean Craddock (Maggie Gyllenhaal, "Secretary," "The Dark Knight") comes to Bad's motel room for an interview and sparks something in his "Crazy Heart." Writer/director Scott Cooper, adapting Thomas Cobb's novel, makes his directorial debut with one of America's greatest actors delivering a terrific performance in a story we've seen a thousand times before. "Crazy Heart" isn't a bad film, it just feels completely unnecessary. Still, Bridges is spot on singing and playing some great original songs by T Bone Burnett ("Walk the Line") and the late Texas songwriter Stephen Bruton ("The Life and Hard Times of Guy Terrifico"). We meet Bad rolling into his next gig, trying to finesse his way into a bar tab that he's denied. Fortunately he's still famous enough with a certain generation to score a bottle on the house at the local liquor store and by the time he takes the stage that night he's well oiled, just like most of his audience. If you note character actress Beth Grant ("Donnie Darko," "Extract") in the second row, it'll be no surprise that the next morning finds Bad slipping out of her motel room. when Jean, the niece of the venue's owner, stops by, Bad is embarrassed by his slovenly circumstances, but the decades-younger woman's knowledge of his generation's music surprises him into opening up and her expressions show undeniable attraction. Perhaps this is what convinces Bad to step up and accept his manager's urging to open in a 12,000 seat venue for Sweet, who appears to genuinely want the best for his mentor, a small but nice twist on usual expectations, but Blake is surprised that he cannot get Jean out of his mind and rushes back to her, rolling his truck over when he fall asleep at the wheel. Told by a doctor that he's a risk for every medical condition known to man and must immediately clean up his act, Blake keeps on with his bad boy ways until he fails single mother Jean so spectacularly it opens his eyes. Enter old buddy Wayne Kramer (Robert Duvall, who went this same route in his Oscar winning turn in "Tender Mercies") to keep Bad on the straight and narrow after rehab with fishing trips and pep talks, but Jean's arms are not as welcoming. Bridges is perfect as the washed up old boozer, a functional alcoholic whose musical performances of C&W tunes carry the stamp of lived-in truth spirally downwards as the night progresses. Even more impressive is how noticeably better he sounds post rehab, just when the whisky and cigarettes seemed so much a part of his act. The actor looks a physical wreck, then crawls back into something resembling health and his scenes with Gyllenhaal are authentic, despite the extreme difference in age. She's quite sexy here, believably besotted enough to overlook good sense and Farrell, an interesting casting choice, projects the new generation of C&W star in a nicely understated turn. Still, Cooper's film dawdles towards it's 'been there, done that' conclusion. It's a nice little movie which should score Oscar attention in the Best Song category ("The Weary Kind" is the one being pushed, but “Fallin’ & Flyin’" is catchier). Someone needs to cast Bridges in the type of role that will win him a statuette, but this one's too familiar no matter how well played. It is obvious, though, that for those involved, "Crazy Heart" was a labor of love.