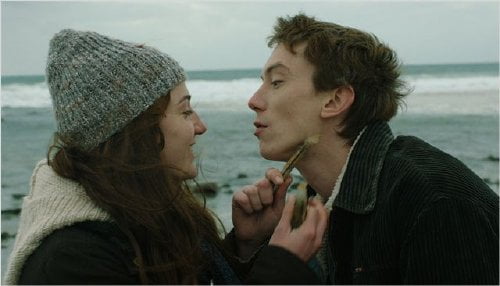 Like his father (Jean-Marie Frin, "Of Gods and Men") before him, Martin (Swann Arlaud, "Romantics Anonymous," "Elles") lives life day by day, harvesting his living from the sea on the Brittany coast and with odd jobs and outings legal and not. He runs from his loving relationship with cannery worker Gwen (Nina Meurisse) when he learns she's pregnant and wants to keep the child while Gwen continues to dream of escaping to Mexico as a championship swimmer doing the "Crawl."

With his feature film debut, cowriter (with Loïc Delafoulhouse)/director Hervé Lasgouttes exhibits a real talent for achieving the look, sound and feel of a particular environment and the type of community that inhabits it. He has also achieved natural performances from his ensemble cast, with a breakout turn by Arlaud, whose distinctive youthful, androgynous features set him apart. But while the actors and Emmanuelle Le Fur's camerawork keep us engaged, Lasgouttes and Delafoulhouse's story is weak. Martin may be the focal character, but the fact that both his girlfriend Gwen and his sister Corinne (Anne Marivin, "Little White Lies") are pregnant by unsupportive partners would appear to be the basis of the film's theme if only there were some heft to it. One could look to a matriarchal society with Gwen's ambitions and Corrine's nursing job while Martin drifts and his father drinks, but Jean has a business, as does the cannery owner. There's Martin's joy in becoming an uncle versus his dismissal of becoming a dad and how one influences his views on the other, but that's too simple. More intriguing is the ongoing element of poaching. We first see Martin, having lost another job, taking lobsters to Corrine's family and bringing one to his dad. When he picks up under the table work with brother-in-law Jean (Gilles Cohen, "The Nun") who is doing construction work at the cannery, a whole fish is presented to Gwen, when he's picking tomatoes, she gets fruit. Oddly, Jean gets into the act, conning a clam digger out of his catch by posing as a local inspector. Then there's the film's climax, Martin again harvesting from the sea when his fishing line snags a dead body and he steals the man's wallet (his use of the deceased's credit card lands him in jail on suspicion of murder, but that story's resolved all too lightly as well). "Crawl's" sense of place and the realistic characters who people it keep us occupied while the film runs, but its conclusion is almost foregone and we're left wondering just what its point was. Lasgouttes clearly has the technical proficiency to make a good film, he just needs to give us something deeper to ponder.