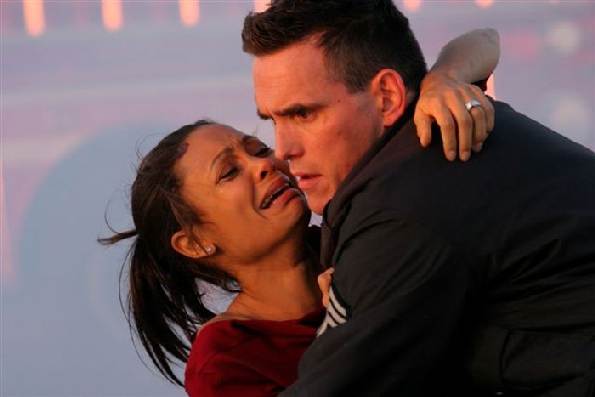 One evening, Graham (Don Cheadle, "Hotel Rwanda"), a police detective on his way to a crime scene, waits while his Latina partner and lover Ria (Jennifer Esposito, "Breakin' All the Rules") argues with the Asian woman who has just rear-ended them. As racial insults fly, Graham observes that no one in L.A. ever touches each other - they just 'Crash.'

"Million Dollar Baby" screenwriter Paul Haggis steps up to the director's plate and scores on his first time up at bat with his searing saga of racial tensions in Los Angeles. Using the crisscrossing, intersecting story line style of Lawrence Kasdan's "Grand Canyon," Haggis travels from the D.A.'s office to the morgue, from the homes of the privileged to those just trying to stay safe in low income neighborhoods, all the while deftly using stereotypes yet avoiding cliche. 'When did we become Arabs?' wonders an Irani woman whose store has been vandalized. Yet in one of the film's early scenes, when her husband Farhad (Shaun Toub, "Maryam") buys a gun with the assistance of his daughter Dorri (Bahar Soomekh, "Intermission"), you may have jumped to the same conclusion. Certainly the owner of the gun store does, forcing Dorri to stand up for the right to arm she has little appetite for. Haggis turns his stereotypes inside out. A pair of young Black men, Peter (Larenz Tate, "Ray") and Anthony (Ludacris, "2 Fast 2 Furious"), discuss how no white people should be frightened by their well dressed appearance on an upscale urban avenue, then proceed to carjack the very couple who reacted to them. Ironically it was the D.A. Rick (Brendan Fraser, "Looney Tunes: Back in Action") and his wife Jean (Sandra Bullock, far from "Miss Congeniality" territory) who were robbed. She claims to have 'known' what was about to happen but could not voice her concern for fear of being labeled a racist. She then gives her racism full vent when a young Hispanic bearing tattoos comes to change their locks. Rick's working the political angle, anxious to avoid being seen as the white victim of a black crime. Meanwhile a racist cop (Matt Dillon, "There's Something About Mary") appalls his new partner (Ryan Phillippe, "Igby Goes Down") by sexually fondling a black woman (Thandie Newton, "The Chronicles of Riddick") whose husband he's pulled over in purported response to the carjacking. Officer Ryan (Dillon) also offends the black woman who administrates his father's health care, but the roots of his racism are surprisingly not inherited. Officer Hanson (Phillippe) gets out of his partnership with Ryan at great personal embarrassment only to end up committing an act he feared his former partner would. Meanwhile, Ryan crosses paths with Christine (Newton) once more and has a personal epiphany. Haggis gets at every angle of his subject, some might find too incessantly, yet the cumulative effect of his film is emotionally wrenching even if all his stories don't bear equal weight. He and coscreenwriter Robert Moresco cannily connect their threads with various amulets - a St. Christopher's medal, a 'magical' cloak - and objects which, like the characters who use them, defy assumptions made about them. Characters cross paths with startling results, like the bitter Irani and surprisingly tender locksmith (Michael Pena, "The United States of Leland"), or sometimes just exist on the edges of another's, like Dorri's role in Graham's shocking tragedy. Only Jean's ultimate insight is dissatisfying because it is more than likely a mistaken one. The ensemble cast is simply amazing, from Newton's fury and anguish to Esposito's casual ability to toss an epithet (and become incensed when the same, albeit unwittingly, is done to her). Dillon has perhaps the most complex character arc and he's just superb mixing extremes. Loretta Devine ("Woman Thou Art Loosed") adds a dose of humor and sass as his nemesis. Larenz Tate and Ludacris have a wonderful opposing chemistry as do Tate and Phillippe. Shaun Toub just spits with distrust, making Farhad the product of his real and imagined prejudicial abuses. Cheadle acquits himself with restraint, most of his hurt and indignation reflected in his eyes. Terrence Howard ("Biker Boyz") projects a milquetoast made of compromise as a Black filmmaker in Hollywood. In smaller roles, Tony Danza (TV's "Taxi") needles as Cameron's producer while Bruce Kirby ("Mr. Wonderful") creates a character (Ryan's dad) with little more than body language. Haggis's film is beautifully shot (James Muro, "Open Range") edited (Hughes Winborne, "Employee of the Month") and scored (Mark Isham, "Spartan"). A hymn accompanies the film's most powerful scene, a car accident and its aftermath that shimmers visually, aurally and emotionally. Haggis' scariest, most insidious success, however, is that in surprising his audience with characters' paths, he makes us recognize our own expectations are built upon stereotypes.

A District Attorney and his wife, the Persian owners of a store, two police detective lovers, a black TV director and his wife, a Mexican locksmith, a pair of carjackers, a cop and a Korean couple – all of these lives will collide in an unexpected “Crash.” Paul Haggis makes his directing debut, following the critical acclaim for his screenplay for Academy Award winner Clint Eastwood’s “Million Dollar Baby,” with his complex tale of the day in the lives of a disparate collection of LA denizens. The title accident begins the multi-racial, multi-ethnic crossing of lives as one of the detectives, Ria (Jennifer Esposito), argues with an Asian woman following a car accident. Ethnic slurs and stereotyping begin to flow until Ria’s partner, Graham (Don Cheadle), discovers a body in the brush nearby. This begins the whirlwind of a movie that throws all of the players together in a frenetic tapestry of disparate lives clashing over a 24-hour period. There are too many things going on in crash to try to give a proper synopsis without giving too much away. “Crash” is not a great film. In the hands of a more seasoned director, with Haggis sticking to script duties, I think that there would have been a tighter, more balanced film. The director indulges himself as scripter and the result is an uneven film that tries, valiantly but in vain, to draw too many lives into the story’s circle. This is not to say that there is not a lot of well-done stuff going on here. Often times, though, the racial situations are all two-dimensional devices used to hammer home the point that tolerance - not racism, hate and misunderstanding – is what will save the world. There are some notable story threads that make “Crash” a worthwhile film. One has rookie cop Hansen (Ryan Phillippe) and his bigoted partner, Ryan (Matt Dillon), pull over an expensive SUV that may have been carjacked. The ensuing racial tension, caused by Ryan, between the white cops and the black couple they mistakenly pulled over nearly explodes, leaving all four badly affected. This story thread is bridged to the film’s best scene between Office Ryan and Christine (Thandie Newton), the black women from the previous evening, which is done with raw, palpable tension. This scene is so well done it almost overshadows the rest of the film. Almost. There are other performances, like Michael Pena’s hardworking locksmith, Daniel, whose Mexican heritage makes him a suspect in the bigoted minds of others in a couple of threads, one of which has a tense, but surprising, climax. Other stories, about the carjackers (Larenz Tate and Chris “Ludacris” Bridges), the DA and his wife (Brendan Fraser and Sandra Bullock) or the cynical Persian storeowner (Shaun Toub), are well enough handled but I think it is too much of an embarrassment of riches. Less would have been more here. Paul Haggis’s debut helming job puts me in mind of the brilliant Steven Soderburgh film, “Traffic,” with all of its story lines and multiplicity of characters. But, he needs to develop a firmer hand on his own work to really shine.