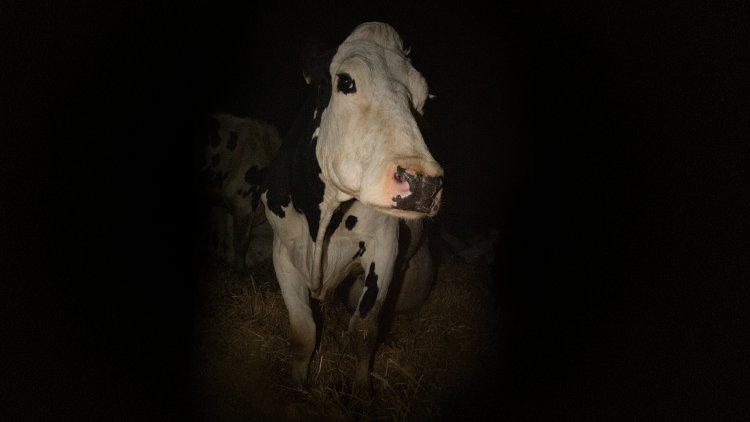 At an industrial dairy farm in England, we are witness to cleanliness and the humane treatment of animals.  But is that really enough?  “American Honey” director Andrea Arnold makes her first documentary feature considering the “Cow.”

This is a very personal documentary from a filmmaker who grew up with a pet lamb and kept a gerbil in a clothing drawer in her bedroom.  Arnold, who finds nature a healing balm, began to regard the cows she’d see grazing as she drove and began to wonder what these animals, who provide so much for humankind, had for a life.  With a cinematographer, Magda Kowalczyk, who gets fearlessly close to these large animals, Arnold focuses on the perspective of one cow, Luma, without narration or interviews from the people who tend to her.

The first thing we witness is Luma giving birth with the aid of female farm workers who pull the calf from Luma’s body.  Shortly after licking her calf clean, Luma is led away to another area where she stands lowing at the camera for several minutes.  As in 2020’s “Gunda,” the fly-on-the-wall documentary about a sow, this is clearly a creature in distress by being separated from her child.  Later, she’s led into the narrow metal holding space where a machine is attached to her udders, heavy with milk for her calf.

I expected Joaquin Phoenix to appear and begin to lecture us about this atrocity, but Arnold’s film, or more specifically Luma, speaks for herself.  The submissive cow faces a mind-numbing routine of being led into narrow stalls to eat and be milked, often with insipid pop music echoing about the metal structure.  We see her calf placed in a separate enclosure where it begins a miniature version of the same treatment after its ears are tagged and its budding horns burned off.  No one is cruel to the animals, exactly, often speaking calming and encouraging words, and the facility is as clean as could possibly be expected.  And yet we’re already beginning to wonder if it was this lifestyle which fostered ‘mad cow’ disease (‘mad cow” disease was actually caused by contaminated cattle feed).

Luma, who endures regular gynecological exams, is led to a large separate pen.  A bull is introduced and soon the inevitable happens.  Arnold ironically cuts in fireworks going off in the distance.  After another human arm enters her up to its shoulder, an ultrasound confirms Luma is once again expecting.

As the film reaches its final third there is a moment of great joy as the cows are let out into a field.  A camera right beside Luma’s head almost lets us experience her sniffing the fresh air and feeling the sun upon her face.  We are soothed watching long stretches of these cows because we can almost feel their contentment.  Kowalczyk also captures some lovely visual reveries, moments caught in magical light.  But eventually the human calls begin and the cows obediently return to the industrial barn.  After another birth and with her udders looking uncomfortably distended, Luma is brought into an isolated area yet again, this time for a very different reason.

Andrea Arnold’s “Cow” is all the more powerful because of the humane conditions of the farm she has chosen to document.  We may never know what Luma is thinking, but this sympathetic portrait makes her unforgettable.

Have you ever wondered what it would be like to live as a cow on a Brit dairy farm for about a year? Well, if your answer is yes, then director Andrea Arnold has the cure for your wonder with “Cow.”

The cow in question here is named Luma and she is a milk cow at Park Farm in Kent, England. We meet our bovine subject at an important point in her life: She is birthing a calf. And, we get up close and personal as the details of that birth and what follows are shown in vivid close up.
One film that came to mind while I watched “Cow” was last year’s oddball tale, “Lamb.” Why does that come to mind? Both movies have a mom whose baby is taken away from her and the plaintive bleating, in both the fiction and the fact, of the forlorn mother.

Kudos to cinematographer Magda Kowalczyk and her camera operators who put us on the same plane and POV with Luma as we see the world through her eyes. Just let me note that Arnold and crew do not pull any punches in depicting life as the titular cow.

IFC Films releases "Cow" in select theaters and on demand on 4/8/22.