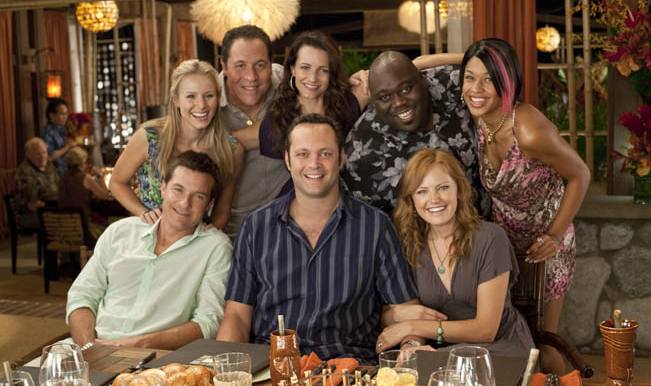 Married buddies Dave (Vince Vaughn, "Swingers," "The Break-Up"), Joey (Jon Favreau, "Swingers," "I Love You, Man"), Jason (Jason Bateman, TV's "Arrested Development," "Extract") and recent divorcé Shane (Faizon Love, "Who's Your Caddy?," "The Perfect Holiday") are surprised to learn that Jason and his wife Cynthia (Kristen Bell, "Forgetting Sarah Marshall") are contemplating divorce because of the stress of trying to conceive a child. The marketing couple present their friends with a Powerpoint presentation to get their buy-in on a 50% four couple 'Pelican Package' discount so they can afford therapy at an exotic South Pacific "Couples Retreat."

"Ocean's Twelve" looked like nothing but an excuse for a bunch of movie star buddies to party around Europe without inviting ticket buyers in on the fun. And so, old friends Vince Vaughn and Jon Favreau ("Swingers," "Made") got together with "What Happens in Vegas" screenwriter Dana Fox to give them an excuse to hang in Bora Bora, but they lack the movie star charm of Clooney, Pitt, Damon and company and have created such a horrifically lame vehicle for themselves, it's hard to believe they started with the delightful Indie "Swingers." If "Exit to Eden" was any indication, beware films taking place in fictional resorts named Eden. Director Peter Billingsley (yes, the 'you'll shoot your eye out' kid from "A Christmas Story") follows the playbook, establishing four very different marriages. Dave and Ronnie (Malin Akerman, "Watchmen," "The Proposal") are typical suburbanites with two young boys and a raucous household who appear to be the lynch pins of the group. Shane is adjusting to divorce from Jennifer (Tasha Smith, "ATL," "Why Did I Get Married?") by trying to behave like the twenty year-old he's now dating. Trudy (Kali Hawk) persists on calling him 'Daddy.' Joey and Lucy (Kristin Davis, "Sex and the City") are the former high school quarterback/cheerleader sweethearts now biding their time until they can split when their eighteen year-old daughter Lacey (Jonna Walsh) leaves the nest. Jason is a control freak breaking under the strain of following Cynthia's natal cycle. So far, so OK, but the set-up which follows completely stretches credulity as supposed 'friends' Jason and Cynthia use emotional blackmail to browbeat their friends to take a vacation which they must decide upon by midnight and leave for the following week. Of course, six other people manage to do just that (and it's already been established that Shane is broke!) and the find themselves on a dock in glorious Bora-Bora ('It looks like a screensaver!' says one, in the film's funniest line - all downhill from here). The hook of the story is that, although Jason and Cynthia assured everyone that only they need participate in the therapy, Eden West's management, in the form of Stanley (Peter Serafinowicz, "Sixty Six") 'with a C,' insists otherwise. After some grumbling, the others agree to go along with the 6 a.m. counselling sessions in order to get on to the good stuff like jet skiing and snorkeling. And, of course, all the other couples turn out to have issues to work out during the course of their stay. In addition to the couples therapy, they are signed up for activities like yoga, where instructor Salvadore (Carlos Ponce, "Deuce Bigalow: European Gigolo," "Just My Luck") mimics hetero and homosexual sex acts with his students; a 'getting in touch with nature' exercise with resort guru Marcel (Jean Reno, "Léon: The Professional," "The Da Vinci Code") that lands Jason and Dave in the center of circling sharks; and massage where the separately horny Lucy and Joey can attempt to come on to their masseur and masseusse. Oh the hilarity. The film's big climax comes to pass when Trudy hightails it for Eden East, the sister singles resort, and Dave, who's been itching to get there all along, rounds up a 'rescue party' that finds them all on a hedonistic island that seems more like spring break in Cancun than an expensive resort in the South Pacific. The film wraps with Marcel presenting each couple with their 'animal spirit' like the Wizard of Oz telling puny puns. Vince Vaughn manages to get by with his aggressive, motor-mouthed persona and Malin Akerman makes for a warm foil and Kali Hawk shows some comedic promise, but the rest of the cast is going through cliched motions. Jason Bateman is the most disappointing. After having stolen scenes in films like "Smokin' Aces" and "State of Play," he is now in his third dud in a row after "Extract" and "The Invention of Lying." Kristen Bell is at least sympathetic but Kristen Davis merely mugs. Of supporting players, Serafinowicz does a nice balancing act between hauteur and servitude and Ponce makes the most of the rotten material he's handed. Jean Reno, however, is but another cliche and it's sad to see "Once Were Warrior's Temuera Morrison (also of "Star Wars: Episode III - Revenge of the Sith") relegated to banging a gong. Of the four therapists, only John Michael Higgins ("For Your Consideration," "The Ugly Truth") even circles humor. Who would have believed a year ago that character actor Ken Jeong ("The Hangover," "All About Steve") would be approaching hit-and-miss over-saturation, let alone name recognition. "Couples Retreat" may be set in Bora-Bora, but it's about as much fun as a lock down with an obsessive religious cult. Like its copious consumer ads for such white bread products as Applebee's and Budweiser, it's unoriginal and made for the masses.