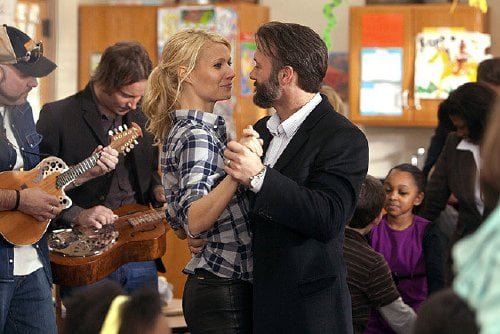 While she's in rehab, country star Kelly Canter's (Gwyneth Paltrow) manager/husband James (Tim McGraw) plans a three city comeback tour for her. But it's also meant as a stepping stone for his new protegee, former beauty queen Chiles Stanton (Leighton Meester, "Date Night," TV's 'Gossip Girl'). Kelly's not too happy about that, but she's got her own young crush to push into the spotlight, Beau Hutton (Garrett Hedlund, "TRON: Legacy"), a rehab worker with a guitar and winning smile. This traveling soap opera will be put to the test on the road in "Country Strong."

After "The Greatest," it would appear that writer/director Shana Feste had nowhere to go but up. Unfortunately, she seems to not only have learned little from her first feature, but to have regressed with this more commercially oriented film. "Country Strong" features some really musical performances by Gwyneth, but the star should have found another showcase for them. Up and comer Hedlund has a shaggy appeal. The opening scene sets the stage for what doesn't work throughout the film. Kelly's casually composing with Beau in her rehab room, her blouse open, exposing a black bra. Her husband appears to inform them both that Kelly's being let out a month early and treats Beau like a bellhop. We're left to wonder whether James wants a wife or a client and are still wondering at film's end. Having behaved so badly performing five months pregnant and drunk at a Dallas concert that she lost her child, Kelly's still in a pretty fragile state, so it makes sense to take her to take her to Houston and Austin before a big confrontation bash in Dallas - right? Wrong. Even with Beau along to presumably keep her off the bottle, a backstage upset has Kelly hitting it within minutes. Feste lifts from Ronee Blakeley's "Nashville" ramble for her onstage antics. In Austin, Beau decides to cheer her up with an outing that suddenly finds the duo riding to nowhere on a freight car. Later, we find him drinking and flirting with Chiles in her room as they watch the Miss America pageant and practice their swimsuit competition moves. I'm not making this up. This is just incompetent filmmaking with nonsensical narrative jump cuts, silly dialogue and characters who sway from one extreme to the other with no central balancing emotional core. There's also a symbolic baby quail that comes in and out of the picture at random, just begging for the ASPCA to be called. There is one scene sweetened by Paltrow and Gabe Sipos, a real life children's charity representative who plays Make-a-Wish's Travis, the recipient of a Kelly song in his classroom. But it's followed by such pseudo tragedy and redemption that its high note is drowned out. I closed my review for "The Greatest" saying it was 'a shaky directorial debut with a weak, soapy script and a cast that is far too good for it.' "Country Strong" makes most sophomore slumps look brilliant in comparison.