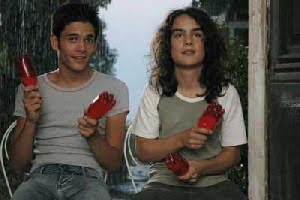 Marc (Gilbert Melki, Lucas Belvaux's "Trilogy," "Intimate Strangers") brings his wife Béatrix (Valeria Bruni Tedeschi, "It's Easier for a Camel...," "5x2") and their two teenaged children to his old, inherited family villa for a summer vacation of sea and sand, but when the local, raw and very aphrodisiacal shellfish are added to the mix, the combination combusts into sexual adventures on the "Cote d'Azur."

Writer/director Olivier Ducastel and Jacques Martineau ("Jeanne and the Perfect Guy," "The Adventures of Felix") have whipped up the most perfect French farce, a whimsical semi-musical meringue of sexual surprises. As their characters slam doors on present persuasions, they open windows to new perspectives. Marc and Béatrix revel in the 'violets' (also known as bijus or potatoes of the sea), shellfish which yield yolky, yellow flesh that disgust their two kids but turn them on. But while Marc is enjoying his own sexuality, his paternal nature comes to the fore as he worries about his two kids. No sooner have they arrived than daughter Laura (Sabrina Seyvecou, "Secret Things") is leaving for Portugal with biker boyfriend Michaël (Yannick Baudin). Meanwhile son Charly (Romain Torres)'s best friend Martin (Edouard Collin) arrives and their behavior convinces Béatrix that her son is gay. Mom is tolerance personified, but the kids treat dad like a cretin, especially since he's become obsessed with their hot water consumption ('I hope you don't live in the shower, too' is Marc's greeting for guest Martin). But just the filmmakers have lulled us into complacency, thinking this is a fairly typical family, Béatrix receives a phone call from her Parisian lover, Mathieu (Jacques Bonnaffé, "Venus Beauty Institute," "Va savoir"), who has followed her to the seaside and Marc begins to exhibit signs of arousal after spying Martin in the shower. A game of musical chairs has begun... "Cote d'Azur" (whose original title, Crustacés et Coquillages, is far more musically descriptive) is a gem, a sunny farce stuffed with great comedic interludes and film homages that puts its characters through life altering events yet leaves them emotionally unscathed. Even though the film is frothy as sea foam, it is clear that Ducastel and Martineau have made it with the exacting skill of a diamond cutter. The opening credits immediately put one into a receptive mood, as animated crustaceans clamber about the credits in bright summer colors accompanied by a breathy French chanteuse. Comedic themes are carried throughout. What begins with the violets continues, with Mathieu spicing his lovemaking to Béatrix with a litany of the shellfish he ate for lunch, like the foreign languages used on Jamie Lee Curtis in "A Fish Called Wanda" (Béatrix responds to a declaration of abalone with 'How sophisticated!,' an admission of crab with mayonnaise earns a flirtatious 'Naughty boy'). Marc's fixation with the shower reaches a hilarious crescendo when the sound of pouring rain awakens him and he prepares to catch a perpetrator. After he secretly disables the hot water heater, Charly's call to the plumber he met following Martin to the local cruising spot, Didier (Jean-Marc Barr, "Dogville," "Le Divorce"), has unexpected results for all while also setting up the film's final punchline. The film's ying and yang is exceptionally plotted and acted, even when driven by yang and yang. The cast is terrific, with Valeria Bruni Tedeschi's free spirit (watch her get loopily high) perfectly paired with Melki's more uptight, responsible parent (he's fighting with phallic looking lawn equipment as she smokes her joint). Romain Torres is the sensitive boy, his long dark hair accentuating his classical romantic persona while Edouard Collin is earthier and more direct. Jacques Bonnaffé at first seems oddly cast as Béatrix's lover, his rather geeky appearance no match for Melki's macho, but his eager wooing and physical comedy is spot on. Jean-Marc Barr's late appearance makes for dramatic changes and he gradually changes our perspective of Didier from intimidating (if nice enough) cruiser to giddily, light-hearted lover. The film is punctuated by three musical interludes, one where Béatrix and Marc perform for Charly and Martin on a rainy day, another where Béatrix meets up with Mathieu in a train station in a scene that plays like a playful inverse of "Umbrellas of Cherbourg." The entire cast takes part in a closing song and dance number, "Eating Shellfish in the Sand." The family that plays together may not stay together in the most classical sense, but the filmmakers ensure sunny happiness for all, including the audience. The French idea of a 'happy ending' is far more satisfying than the conventionally neat ones served up in Hollywood. "Cote d'Azur" is the type of movie that will plaster a smile across your face and keep it there.