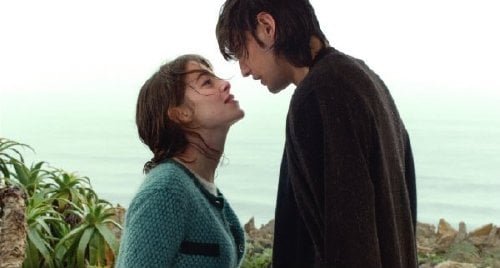 Witold (theater actor Jonathan Genet) needs a quiet place to study for retaking the bar exam. Fuchs (Johan Libéreau, "High Lane," "Grand Central") is rebelling against his boss, Ralph Lauren, with an unscheduled holiday. The two decide to stay at the inn run by Madame Woytis (Sabine Azéma, "Wild Grass"), but when Witold's prior disturbing discovery of a sparrow hung by its neck in the woods appears linked to other strange signs within the house, he becomes obsessed with the "Cosmos."

Adapting Witold Gombrowicz's last novel turned out to be Andrzej Zulawski's ("Possession") last film. Is there meaning in this? The author and filmmaker's protagonist would tie himself in knots trying to prove it so. Witold, named after Gombrowicz, tells Fuchs that the man 'never finished his novels nor knew their meaning,' which may strike some viewers as an assessment of the film. But this surreal, frenetically paced movie somehow manages to feel both like the construction and deconstruction of a book. (In its more amusing passages, "Cosmos" often makes us feel like we've been invited to the Mad Hatter's tea party.) The inn is a lovely old European home near the sea (the movie was shot in Sintra, Portugal), its lively innkeeper cooking up a storm when she isn't frozen in psychosomatic paralysis. Her husband, Léon (Jean-François Balmer, "In the House"), is a former insurance man with a fetish for toothpicks and adding cutesy flourishes to language. Fuchs becomes obsessed with Catherette (Clémentine Pons), Woytis's niece and help whose disfigured lip, the result of an accident, is a point of conversation. But it is the innkeeper's newly married daughter Lena (Victória Guerra, "Mysteries of Lisbon"), an incessant smoker (another way for Zulawski to focus on lips), who captivates Witold. During their first dinner, Lena's husband Lucien (Andy Gillet, "The Romance of Astrea and Celadon") tells Witold, fretting over the dead sparrow, that he believes there was once a chicken hung out on the street. From this point, Witold looks for clues everywhere, believing a mold pattern in the corner of his room is an arrow (Zulawski employs cutaway series to remind us of what Witold has connected). He's excited by the find of a block of wood and abandoned rake, but when he spots Lena nude in her room with her husband, he's driven to create his own symbol. Once found, the residents are in such turmoil, Léon suggests a beachside picnic to clear their heads. After picking up a priest (António Simão, "Mysteries of Lisbon") they encounter at a stop, the group makes its way to the home of Lena's friend Ginette (also Pons, without the disfigurement) and her husband Tolo (Ricardo Pereira, "Mysteries of Lisbon") where a third (fourth?) hanging takes place. Or does it? This film, which is stuffed with literary (Tolstoy, Satre, Stendhal, Shakespeare) and cinematic references, is never boring, although it can be frustratingly abstract. There is a charge of eroticism, Lena first found sleeping in Witold's bed, breakfast served with alarming intimacy to sleeping guests. Love itself is a minefield, Woytis continually criticizing her husband for his household incompetence (which he immediately proves given a simple task), Witold turning cruel when he achieves his desire whether in dreams or the film's unreliable reality. Zulawski, who won Best Director at the Locarno Film Festival before his passing, has a strong hold on his ephemeral material. His ensemble cast, from fresh finds like Genet to veterans like Azéma, follow his lead with abandon, keeping us invested in a tale that continually eludes our grasp. The filmmaker wraps with the last line of Gombrowicz's book, 'At dinner we had chicken with béchamel sauce,' a humorous dare of a conclusion. "Cosmos" is intellectually challenging and delightfully bonkers. Grade: