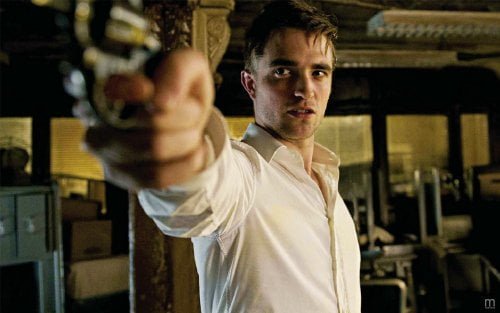 It is just another day in the big city for 28-year old multi-billionaire Eric Packer (Robert Pattinson) as he rides across Manhattan in his uber-stretch limo to get a haircut. But there is danger lurking with the Rat People protesting against the one-percenters and riots breaking out in the streets of New York. For Eric, on this day business is not as usual in “Cosmopolis.”

David Cronenberg, in his earlier days as a filmmaker, was best known for his offbeat horror tales like “The Brood,” the remake of “The Fly,” and “Dead Ringers.” Then he branched out his talents in different directions, resulting in “Naked Lunch,” “Crash,” and “A Dangerous Method.” His latest, which takes place mostly in the back of Packer’s cavernous stretch, showcases his star Pattinson – the reason I was reluctant to see “Cosmopolis.” To my surprise, the “Twilight” thespian is the best thing in “Cosmopolis.” I have never been a fan of Robert Pattinson. I dreaded all of the “Twilight” movies (only in part because of Pattinson) and have not developed a great deal of respect for the actor, “Water for Elephants” notwithstanding. Director Cronenberg elicits a good performance from the young actor, one that actually overshadows the film itself. The film, with Cronenberg and writer Don DeLillo adapting DeLillo’s literary work, is a confined effort, even when Eric leaves his vehicle for a bite to eat or get his haircut. Packer is visited on the road by a variety of people from his art advisor and mistress Didi (Juliette Binoche), his doctor for his daily physical (including prostrate exam while discussing business with his sister Jane (Emily Hampshire)), his money-philosopher and chief of theory (Samantha Morton) and his old-money rich fiancée Elise (Sarah Gordon). This makes the film a series of vignettes tied together by violent events taking place outside of the limo. This breaks up any coherence in the film as Eric spirals downward, going from master of the universe to sitting in a squalid apartment with a gun at his head. Cronenberg uses sound effectively, eschewing the use of ambient noise in Eric’s soundproof limousine, so oftentimes just the dialog is heard. This focuses attention on the dialog and this is a hit or miss proposition, depending on who is in the car. One character that is very useful (and interesting) is Eric’s head of security, Toval (Kevin Duran). While others enter and leave the car, Toval is always there to advise Eric on the safety of his trek – the streets are ablaze and several huge events possess the city like the visit by the President and the huge funeral procession for a famous and beloved rapper (and personal friend of Eric’s). I liked this journey through hell aspect of “Cosmopolis.” It helps smooth out the often disjointed vignettes. This is the kind of film that you watch and form an immediate opinion – liked Pattinson, not the film. Afterward, if you reflect on the elements of “Cosmopolis,” though, it has some very intriguing ideas and concepts. If you are a fan of David Cronenberg, you should include it in things to watch list. I give it a B. I give the Blu-Ray a B+. The Blu-ray: David Cronenberg marched down his own, unique road earlier this year with his Robert Pattinson starrer “Cosmopolis,” which takes place mostly within the confines of the main character, 28-year old billionaire Eric Parker’s, limousine. It is a journey through a New York that has become a hell because of the wheeling and dealings of such Masters of the Universe as Eric. The film is now in release in Blu-ray/DVD and the extras package is, like the film, a unique cinema experience, especially for the filmmaker’s fans. There are only a couple of extras – Cronenberg’s voice over narration of the film and a “making of” feature – but do not let that fool you. While David Cronenberg is not the most energetic of narrators, his obvious depth of involvement in all aspects of the film comes through as he talks about the use of special effects, green screen and his actors and it makes for a solid companion to the film. The “making of” feature is just that – a full length documentary about how the film was made, the nuts and bolts of cinematic illusion, the technology behind green screen and much more. I have never seen such an extensive, in-depth analysis of a construction of one man’s vision to make a movie. This combination of extra materials makes the “Cosmopolis” a must to see for David Cronenberg fans.