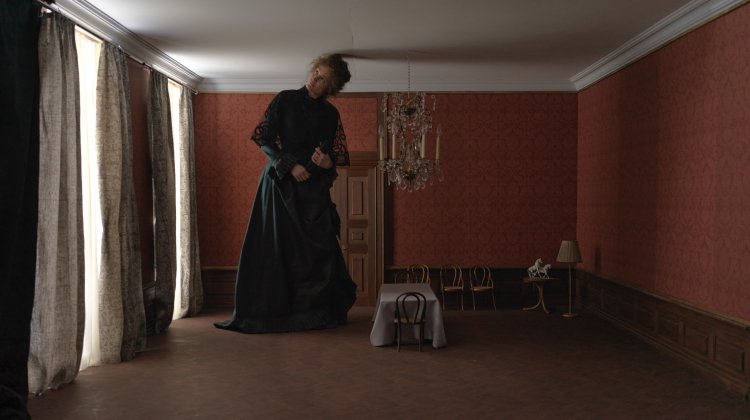 After her 40th birthday in 1877, Empress Elisabeth (Vicky Krieps) of Austria is informed by her husband Emperor Franz Joseph (Florian Teichtmeister) that while he controls the empire, ‘You represent.  That’s what I chose you for and that’s what you’re here for.’  After years of spending hours daily on her long, luxurious locks along with sport and exercise fueled by little food, Sisi rebels against all the trappings sustaining her image, including her suffocating “Corsage.”

Austria’s submission for the 2023 International Oscar is a far cry from the Sisi trilogy it traditionally broadcasts at Christmas time.  Those films, featuring a radiant teenaged Romy Schneider, offer an idealized and romanticized version of her early years leading up to her mid-20’s in a setting reminiscent of “The Sound of Music.”  Yet while even in the 1950’s Sisi was presented as a free spirit chafing against the constrictions of court life, she is nothing like the subversive figure crafted by writer/director Marie Kreutzer and her star here, one whose exploits are accompanied by such anachronistic musical selections as Camille’s ‘She Was,’ ‘Help Me Make It Through the Night’ and “As Tears Go By,’ giving her a punk rock edge.

Krieps had an amazing year in 2022, first mystifying us, then breaking our hearts in Mathieu Almaric’s extraordinary “Hold Me Tight,” only to follow up that tour de force with her complicated portrayal of the renowned beauty and beloved royal as a passionate, caring, selfish, exacting, intelligent, shrewd, vain and playful woman.  A new Sisi movie was Krieps’ idea and Kreutzer has chosen to go the fictionalized biographical route seen recently in such films as “Spencer” and “Blonde,” inventing such historical events as Sisi collaborating with motion picture camera inventor Louis Le Prince (Finnegan Oldfield) in order to illustrate aspects of her personality.

We are introduced to the empress receiving veiled criticism about struggling with her weight and being a phantom in Vienna (the woman instrumental in Austria and Hungary’s dual monarchy spent a lot of time in the latter country for the freedoms it afforded her) before she crumples to the ground, the victim of her tight corset (or was she?  We will see her pantomiming the act for her cousin, mad King Ludwig of Bavaria (Manuel Rubey).  Because they were raised with the system she finds stifling, Sisi isn’t even immune from criticism from her own children, her son, Rudolf, Crown Prince of Austria (Aaron Friesz), warning against the rising gossip about her relationship with her English riding partner Bay Middleton (Colin Morgan, "Belfast"), her youngest, Valerie (Rosa Hajjaj), telling her smoking is ‘not fitting’ after being embarrassed when mom shares a ciggie with a patient during a hospital visit, lying down on the bed beside him.  But, as Sisi will tell her husband, ‘A lion doesn’t lose sleep over the opinion of sheep.’

With one obligatory duty after another rolled out in front of her, Sisi tries to regain control over her life with travel, first to England, where she cock teases Middleton only to tell him what she is after is the way he looks at her, a desire to be desirous in middle age, then to her Bavaria to skinny dip with Ludwig and make a more serious attempt at seduction (Ludwig will pour a pitcher of melted chocolate in her mouth, the first food we see her consume other than a ‘thinly sliced orange’ or bone broth).  In one of her more brazen acts, Sisi will leave a state dinner, saluting with her middle finger on her way out the door.  A doctor prescribes heroin for pain and to calm her down, assuring the empress that it is absolutely harmless and so Sisi goes down a rabbit hole.  The empress’s lady-in-waiting, Countess Marie Festetics (Katharina Lorenz), a woman she’d denied a happily married life to keep by her side, is tasked with being her double.  Suddenly Marie cannot eat almost anything and she returns from her first tightly corseted appearance vomiting from its extremity.  In this version of one year of her life, Sisi even has the audacity to bob her famous hair.  ‘I feel like a part of you has died,’ says Franz Josef when he sees her, but is comforted in his wife’s bed (the emperor reportedly was far more passionate about his wife than she him).  Her assassination, which actually happened twenty years later, is symbolized as a freeing act of suicide, Sisi throwing herself off the bow of a boat.

All hail Paul Thomas Anderson for bringing this actress to the global stage back in 2017 with “Phantom Thread.” Five years later she stands as a world class actress, her “Corsage” performance a thrilling high wire act.  Kreutzer’s made some bold choices with this sly revisionist take and her production is magnificent, locations including the actual Schönbrunn Palace.  Costume (Monika Buttinger), hair and makeup (Maike Heinlein ) are all noteworthy, the former opulent (a black fur-trimmed riding habit with modified top hat is a standout) , the latter a perfect balance of stunning wigs and restrained, natural beauty.