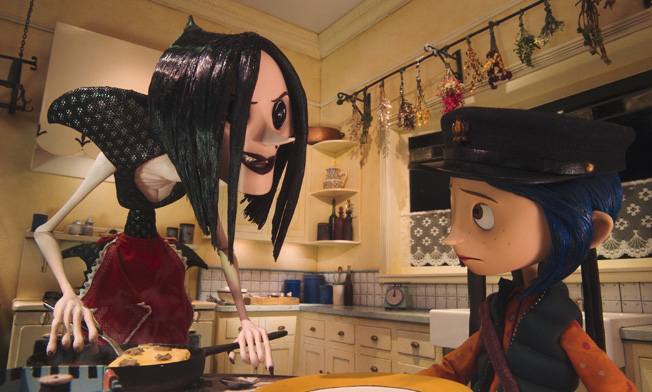 Coraline’s (Dakota Fanning) parents moved to rainy Oregon to start a new life for the tiny family. But, the active youngster has a problem with being ignored and explores their new home, a subdivided old Victorian. She finds a hidden door but it only opens onto a brick wall. One night, though, she follows a little mouse, opens the door and discovers a tunnel. Ever curious, she enters the passageway and discovers a world that is eerily like her own world ­ but better. Well, maybe not. Find out with “Coraline.”

Director Henry Selick is known for his landmark animations with Tim Burton, “A Nightmare Before Christmas” and “James and the Giant Peach.” He takes it up a notch as he couples his keen eye for anime with state-of-the-art 3D technology and delivers a wonderful fantasy adventure for older kids on up. There is enough creepiness, though, that younger, sensitive children may find it too scary, so parents be aware. Selick adapts the Neil Gaiman book about a girl who gets what she wishes for but learns that this is not always the best thing. She enters the doppelganger world where she meets her Other Mother (Terri Hatcher), identical to her real mom in every way ­ except she has buttons where there should be eyes. She is also a much better cook than Real Mother and shows Coraline the loving attention missing in the youngster’s real world. Soon, though, chinks appear in the fabric of the Other World and Coraline soon learns that the grass is not always greener in the other yard. “Coraline” is the first 3D movie that uses the technology as an integral part of the filmmaking process, rather than as a showcase for the slick effect a la “Journey to the Center of the Earth (3D)”. There are the obligatory come-out-of-the-screen effects to remind you that this is a 3D flick but Selick and his talented behind the camera crew make it feel natural. I soon forgot I was watching high tech special effects and reveled in the story, its intelligence and humor. The vocal talents are not the, of late, all star cast variety. Dakota Fanning and Terri Hatcher are on screen stars but their voices are not readily recognized, allowing you to pay attention to their characters and enjoy them. The same goes for Jennifer Saunders and Dawn French as rather overweight, ex-vaudevillian neighbors, Miss Spink and Miss Forcible, who also have their button-eyed twins in the Other World. Ian McShane has a great deal of fun giving voice to Coraline’s other neighbor, the Amazing Bobinsky, a down on his luck circus acrobat who is trying to make a comeback with his musical mice. His double (also with button eyes), like the others, appear to be “better” than their originals. Other vocals, including Keith David as the only creature, a cat, who can also move between worlds, are perfectly utilized. My only complaint with the story is that the tail end of the tale is too long and a few minutes of judicious cutting would have made it a tighter film. As it is, Coraline is a marvel of storytelling and technology melded together into a wonderful whole. I give it an A-. The DVD: We came to love the diminutive 11-year old girl who journeys to another world where things seem better than her new “normal” home of drudgery and boredom in Portland, Oregon. Universal Home Entertainment brings the 3D animation to the small screen in the disappointing DVD release of “Coraline.” The theatrical release of “Coraline” gave the viewer a richly layered story coupled with skillful stop motion animation and excellent 3D technology. The 3D effect is an integral part of whole package and helps to enhance, not overshadow, the overall fabric of the story and animation. (This achieved even greater heights in the wonderful “Up.”) I was surprised, and hopeful, when the DVD release also has a 3D version. Well, watching it with the provided glasses put me back in time to the early days of 3D movies at the theater. Unfortunately, this is not a good thing. The effect has a long way to go to make it the integral thing it has become in today’s movies. I actually found it to be an annoying experience and lost the glasses quickly. Laura, who could not see “Coraline” at the theater, is a real trooper, though, and sat through the whole thing wearing the silly glasses. I recommend watching the DVD in 2D. It does not give you a headache. I was also surprised by the scarcity of extra material on the DVD release. Click on “Bonus Features” and the only entry is the commentary by director Henry Selick. Only later did I see an entry, not given the first time, for an additional commentary by Selick and composer Bruno Coulais (They Might Be Giants). (It is listed on the case but the Selick only narration is not.) Overall, the “Coraline” DVD release is a major disappointment. Not enough extras and bad 3D make this a less than satisfying whole.