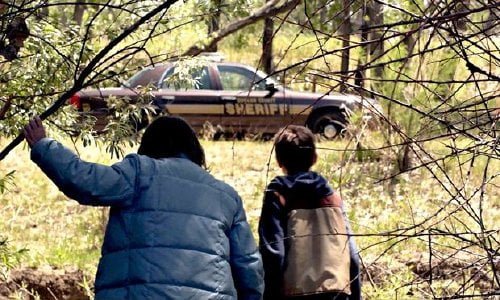 One beautiful day in the wide open spaces of Colorado, Harrison (Hays Wellford) and Travis (James Freedson-Jackson) are busy running away from home, sharing swear words and a Slim Jim. Dreams of adventure come true when they find Quinlan County's Sheriff's car parked in a copse in the middle of nowhere. After a couple of dares to touch the vehicle produce no driver, they investigate further. Travis finds the keys and the two set off on a joy ride, unaware of just what's in the trunk of their "Cop Car." There are so many independent films getting minuscule theatrical releases, popping up on VOD, that it takes something really special to get noticed. Recent regional crime dramas like "Blue Ruin" and "Cold in July" broke through with critical acclaim, so set your radar for cowriter (with Christopher Ford, "Robot & Frank")/director Jon Watts's Fargoesque tale where bad things happen to the wicked and those caught in their crosshairs because it's even more deserving of discovery. Watts isn't afraid to take his time, his film unfolding in close to real time in long scenes which are allowed to breathe. We stay with those boys for quite a while, learning that Travis is the daredevil, Harrison more introspective and cautious (he's the one who has the provisions, deciding that it will be parceled out in bites of 'two centimeters'). It's not until well after the boys take off that Watts rewinds, showing us how 'their' car got there. A weathered and ropey Sheriff (Kevin Bacon) with a droopy moustache drinks a beer, puts the bottle on his fender, takes off his uniform shirt and gets to work that is clearly unofficial and very physical (it involves a bag of lime and an abandoned well). When he returns to his car there isn't one, his sanity checked only by his bottle lying in the grass. In a controlled panic, he calls his dispatch (the voice of Bacon's wife, Kyra Sedgewick) and reports radio problems, then hikes until he can hot wire a car to get him back to home base, his truck outfitted with a police radio. Meanwhile, a local townswoman (Camryn Manheim, TV's 'The Practice,' 'Person of Interest') who's seen the boys speeding by reports it when she runs into two officers at a diner. The boys, who've taken a breather from trying to hit 100 mph, hear a noise coming from the trunk and find themselves in negotiations with a beaten, bloodied man (Shea Whigham, HBO's 'Boardwalk Empire'). Harrison and Travis have unwittingly picked an ideal spot, a windmill by the side of a long, straight road, for a showdown. Watts's clean, spare script comes at us from only three perspectives, only switching scenes when a new development warrants it. He's got a great sense of how real kids behave and feels no need to give us his Sheriff's back story, allowing the man's reactions to paint his picture. Cinematographer's Matthew J. Lloyd, CSC ("Robot & Frank") & Larkin Seiple alternate "Texas Chainsaw" style shots, figures dwarfed in rural landscapes, with artful yet simple character compositions. Phil Mossman's ("I Origins") score is more of a moody soundscape than traditional composition, another on-the-nose element of a film that's firing on all cylinders. Freedson-Jackson and particularly the soulful Wellford are screen naturals. Bacon's created a real wolf in sheep's clothing, his hard-eyed menace masked beneath the calm geniality that is his public persona. Manheim and Whigham have far less screen time, yet each has a strong presence. "Cop Car" is a pitch black comedy that keeps you laughing at its escalating situation while never undermining the danger facing its innocents. This one's more than a calling card, it's the whole damn shebang. Grade: