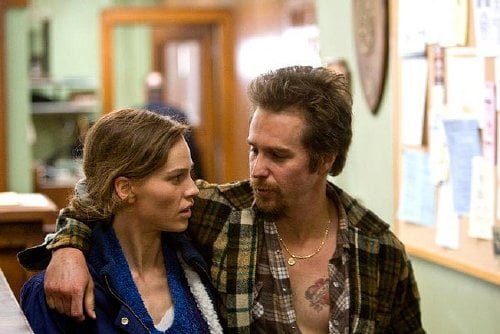 Kenneth “Muddy” Waters (Sam Rockwell) is a happy-go-lucky ne’er-do-well living near Ayer, MA. Betty Anne (Hilary Swank) is his loving high school dropout sister who overlooks his seemingly harmless shenanigans. During the funeral of their grandfather, all hell breaks loose when the police unceremoniously come in and arrest Muddy for first-degree murder. Betty Anne knows he is innocent, though and begins a 16 year quest to free her brother in “Conviction.”

Oscar calibre acting, a time fragmented structure that works beautifully until the film pulls completely into the present in its third act and an authenticity of time and place, even though Michigan stands in for Massachussetts make "Conviction" a film worth seeing. The finale may be predetermined, but getting there isn't a straight shot - legal loopholes, a corrupt police official and MA Attorney General Martha Coakley form challenging obstacles to a woman who loses her husband, then her sons, to her laser-focused mission to save the brother who always looked out for her during their tumultuous childhood. I do not agree, however, with Goldwyn's decision not to include Kenny's ironic death less than a year after his release along with his other end credit notes - it would have packed a real jolt.

This is a well-acted, based on a true story tale that has one major problem. If you read anything about this case, even in a short film synopsis, you know exactly what is going to happen from beginning to end. As such, there is no real tension and director Tony Goldwyn gives a straightforward account of a familiar narrative – a case that uses DNA evidence to clear a convicted man. What “Conviction” is about, though, is the titan effort by Betty Anne to prove her brother innocent. She is married and has two boys but, faithful to Ken, she works hard to help free him from life in prison. Her husband is against her helping a murderer and her marriage is torn apart as she earns her GED, graduates college with a BA and goes to law school, all so she can help her brother. She spends nearly two decades in her quest and, as you know going in, she will prevail. It is an inspirational story and Hilary Swank gives a frank, earnest performance, showing her skill as an actress. This does not have the power of her Oscar winning roles but is still a solid character study. Though Hilary Swank is front and center throughout “Conviction,” Sam Rockwell gives a clearly arced execution of his character, Muddy. His blithe attitude toward life is torn asunder when he is arrested, tried, convicted and incarcerated for a murder he says he did not do. When Muddy enters prison, he begins a long, slow decline into desperation and depression, even though Betty Anne assures him she will make him free. Rockwell gives a first-rate supporting performance. Other supporting characters are played with less dimension than the star and co-star. Minnie Driver plays Abra Rice, another older law student who becomes Betty Anne’s best friend and loyal supporter. Melissa Leo is wasted as the corrupt cop who has it in for Muddy. Juliette Lewis gives a raw, hardboiled performance as one woman who testified against Ken and helped seal his fate. Lewis is on the edge for role and it is one of her best perfs to date. Tech credits are on par with the acting, though the sense of time passing is not handled particularly. Nearly two decades of aging of the characters is fluffed over. Period sense is not clear and the Ayer (that’s “Ayah” for those from these parts), Massachusetts accents are terrible. They are either over the top, like Minnie Driver, or non-existent. (See “The Town” for well done Boston accents.) “Conviction” is a stalwart, though thoroughly predictable yarn – there should be intrigue but, knowing in advance exactly what is coming, that cannot happen. It is a good exercise in true story telling.