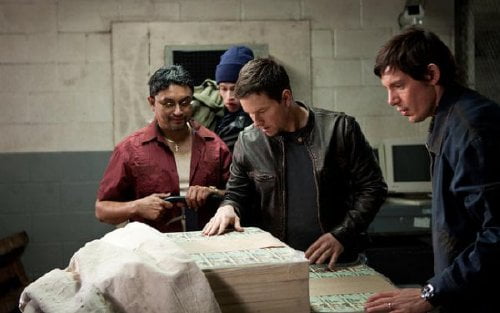 After years spent smuggling on New Orleans-based cargo ships with his buddy Sebastian (Ben Foster, "3:10 to Yuma," "The Messenger"), Chris Farraday (Mark Wahlberg) has become a happily married father of two with his own home security business, so he's pretty agitated when he discovers his brother-in-law Andy (Caleb Landry Jones, "The Last Exorcism," "X-Men: First Class") is now indebted to local thug Tim Briggs (Giovanni Ribisi, TV's 'Friends,' "The Rum Diary") for panicking under the scrutiny of U.S. Customs and feeding the ocean his cocaine "Contraband."

Icelandic director Baltasar Kormákur ("101 Reykjavík") proposed remaking one of his own starring vehicles, "Reykjavik-Rotterdam," for English language audiences and so here we have "Contraband," adapted by Aaron Guzikowski (screenplay) into a "New Orleans-Panama" version. But did the world really need this genre exercise which follows the same old path as many films before it? It's a decent enough action vehicle with plenty of violence and a director crazy enough to cast scenery masticators Ben Foster and Giovanni Ribisi in the same film, but it's also overlong and is destined to fade from the memory quickly. This is one of those 'just when I thought I got out they pull me back in' crime dramas where the antihero (Wahlberg) is secretly thrilled to have an excuse to do what he does best again, but where everything that can go wrong does including family imperilment. Considering its 109 minute running time, "Contraband" is also one of those films that plays a little fast and loose with its exposition, barreling along leaving logistical details to be taken on faith. In no time, Chris has assembled a team to work on the Borden, a ship his convict dad Bud (William Lucking, TV's 'Sons of Anarchy') had ties with. That also means that as soon as they're on board, the Captain (J.K. Simmons, "Spider-Man," "Juno") is suspicious of Chris (the Captain has no say in hiring his crew?) and demotes him to 'ship boy,' a menial job that, of course, gains Chris the kind of access he needs. Chris's idea to make up the lost drug money Briggs is now threatening his entire family with is to pick up counterfeit currency from an old contact in Panama City and transport it back in a hidden compartment. He has a limited amount of time in the city, so of course he's let down by his initial contact, forcing him to do business with the notorious Gonzalo (Diego Luna, "Y Tu Mamá También," "Open Range"). Back home, things are not going as planned either, as Chris's wife Kate (Kate Beckinsale, the "Underworld" series) and their kids aren't under the protection Chris thinks they are and Andy, who's with him, is being forced to do another 'run' (these guys' term for smuggling) and leaves Chris high and dry at the worst possible time. The film is shot in that hand held style where the camera keeps moving up and down or side to side as the operator finds focus, giving the film a gritty look and the film is edited (Elísabet Ronaldsdóttir, "The Sea," "Reykjavik-Rotterdam") so we can at least follow what's been presented. A Panama City gun fight between Gonzalo's crew and police aided by a S.W.A.T. team, in which Chris and his buddy Danny (Lukas Haas, "Witness," "Inception") have been forced into a dangerous no man's land is well staged and exciting, although their 'beating the clock' to get back on board with the goods as Customs bears down is less so because of too much sleight of hand. Kate's ultimate predicament is far fetched, but Kormákur leads into and out of that set piece with two humorous scenes which allow his film to exit on an up note. The ensemble cast boasts more talent than the film justifies, but everyone adds their own flavor. Foster dials down his desperation so Ribisi can go full throttle with his Cajun crazy. Jones is particularly well cast in a role that's tricky to maintain sympathy for and Beckinsale is adept walking that line between sexy and de-glammed. David O'Hara ("The Departed") is intriguing in scant screen time as major player Jim Church. "Contraband" isn't as good as last year's New Orleans set Ben Foster co-starring remake of "The Mechanic," but Kormákur at least spins enough style to raise it above the usual lazy Hollywood dreck.