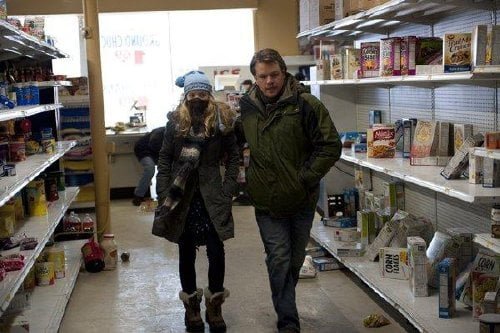 Beth Emhoff (Gwyneth Paltrow) returns from a business trip to China with a burden of guilt and another she does not know about. What at first seems like jet lag turns into a flu and then, all too abruptly, death. Her husband, Mitch (Matt Damon), is dealt a second blow when their young son Charlie follows, and he makes it his only goal to save his teenaged daughter from "Contagion."

Steven Soderbergh did a masterful job examining the far reaching web of the drug trade in "Traffic" but "Contagion" feels like a much longer film that's had its soul cut out. He touches on many aspects, from the doctors frantically testing for a cure and those on the front lines dealing with the logistics of quarantining masses of people to the ethics of those on the inside giving their own priority to society at large versus personal stories and even how Wall Street reacts, but only a few of the stories compel and even the reliable Matt Damon fails to make a strong impression. "Contagion" is an OK medical thriller, but there's something off about it. Even it's sound design feels a bit hollow at times. It starts off with a cough. Two actually, before the picture arrives titled 'Day Two' as Beth talks to an obvious lover on her cell, waiting for her flight to be called. From the onset Soderberg's camera rests on those innocuous things - bar snack peanuts, elevator buttons and door handles - that can prove lethal as viral petri dishes. Gwyneth Paltrow is a real good sport and has a healthy sense of humor about herself. Her pre-death seizure is chilling, her post-mortem impression both horrifying and a little hilarious. When doctors see what's inside her head, reaction begins to spiral globally. Freelance journalist Alan Krumwiede (Jude Law) finds video of the collapse of a Japanese man on a bus and brings it to Lorraine Vasquez (Monique Gabriela Curnen) at the San Francisco Chronicle, but she's not interested in underwriting his story, so Krumwiede turns to his own Truth Serum Now blog to spin the story to his own ends. At the CDC in Atlanta, Dr. Ellis Cheever (Laurence Fishburne) meets with Dr. Erin Mears (Kate Winslet, excellent) to discuss their message and send her out into the field to collect data on Emhoff and prepare for pandemic. His initial meeting with Dr. Ally Hextall (Jennifer Ehle, looking more like Meryl Steep's daughter than the Gummers), the woman who will begin to hunt for a cure, offers no good news. At the World Health Organization in Geneva, Dr. Leonora Orantes (Marion Cotillard) is sent to Hong Kong to work with Sun Feng (Chin Han, "2012") and pinpoint the genesis of the virus. Dr. Ian Sussman (Elliott Gould) tries to reproduce the virus at his university lab, even after Hextall orders him to destroy what he has. Mitch Emhoff, who has been proven to be immune, holes up with his daughter Jory (Anna Jacoby-Heron) whose initial concern for dad turns to viewing him as her jailer when he won't allow contact with her boyfriend. It is through their eyes that we view the breakdown of society as people vie for dwindling resources. Soderbergh does a good job paralleling how panic spreads like the virus, government officials keeping what they know close to the vest to keep order until chinks from within spill outside ("The Informant!'s" Scott Z. Burns wrote the script). In the film's tensest scene, Mears identifies a man Beth Emhoff came into contact with and locates him on a public bus, clearly suffering from symptoms. It's not long before rioting breaks out and health industry workers abandon their posts. Mears's thread is the film's strongest, not only because it bridges the personal POV with the official but because Winslet is so strong in the role, a true humanitarian and hero. Also good is Ehle, who glows with a fervor she just keeps from eking over into righteousness. She's the one who puts everything together ('The wrong pig met up with the wrong bat.') Fishburne is solid as their lynchpin, but his personal story doesn't resonate as strongly as it should (he tells his girlfriend to get out of Chicago before the city is quarantined and she cannot resist telling a friend). Cotillard's given an extreme surprise twist to her subplot, but it's abandoned until late in the game and has no dramatic force. Jude Law's muckraking journalist Alan Krumwiede is made a stereotypical Brit by giving him a prosthetic crossed front tooth that's more distracting than convincing and its not clear what he's up to. Of course, after jumping off on Day Two, it's clear that the film will circle back to Day One, which it does via a sentimental scene at the Emhoff household. The segue is cleaner than the earlier investigative scenes, which would have us believe stylishly angled cameras followed Beth's every move in a Macau casino, but an overly coincidental big corporate tie-in of Beth's company to her as ground zero is overkill.