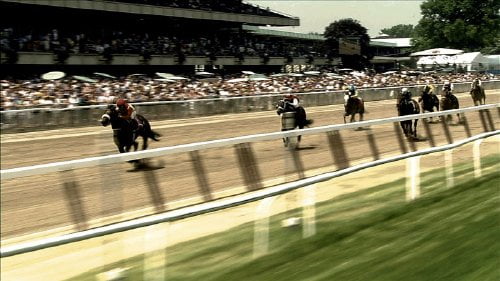 The crime scene in Boston has gotten too small for all the gangs vying for the ill gotten gains of the city's criminal underworld. The Mafia, led by Mr. Million (Robert Dicicco), wants to control everything but an upstart gang of deaf thieves from Southie is out to pull off the city;s biggest heist ever in "Conned."

As Mr. Million (Robert Dicicco) plans a fix at Suffolk Downs's most lucrative stakes race, he's sent into a tizzy by a weird group of Southie bank robbers who communicate via sign language and apparently stole his car. The weakening heads of Boston's underworld are about to be "Conned." This local indie, shot entirely in Massachusetts by writer/director/editor Arthur Luhn, is an attempt to turn the usual Boston crime movie on its head, but while it has some laughs and flashy visuals, it has too many characters to keep track of in a plot that becomes incomprehensible. The filmmaker, who was born deaf, has come up with something quite unique with his hearing impaired 'Southies,' a humorous bunch who certainly deserve a film. But Luhn tries to do too much, and in so doing loses control of his story. By a third act shootout I had no idea where the shootout was taking place or why it was happening. The big race, which we see at a racetrack that doesn't really exist, isn't mentioned through much of the film and when it happens it's unclear just what went down. This tendency is also evident in the film's opening, an homage to Guy Ritchie that's crammed with quotes, character introductions and credits which seem to continue at least 10 minutes into the film. The movie's most compelling character is Irish, who, although credited to a 'Joe Cheapskate' certainly looks like his creator. If Luhn does indeed play Irish, he has cinematic charisma to spare. He's cast his film with lots of interesting and authentic faces. Unfortunately a few of them, namely Jessica Hansen as the two-timing Cerise, aren't convincing actors. Other characters like John McGinty's Newster, who initially appears to be the Southies' leader, spin off into uninteresting subplots. The film boasts all kinds of visual interest from pool shot POVs to vertical wipes to overlaps to animated stills and changing aspect ratios. Composer Munk Ciano (HBO's 'The Sopranos') adds funky aural complements in his cool score. Luhn clearly has talent both in front of and behind the camera, but he needs a producing partner who can help focus his creative enthusiasm.

Things start out well enough in this home grown, Boston-based crime dramedy by sophomore helmer-scribe Arthur Luhn and his bevy of interesting characters. The crime caper, though, becomes out of focus early on as these many characters are introduced and their back stories are told. The problem is, there are too many characters for the inexperienced writer-director to manage with the different gangs and their members brought into the picture. There are the Townies, the North End Mafia and a new gang vying for power – the deaf gang from Southie. Most interesting are the Southie characters with their colorful names and personalities – Irrish, Toolbox, Pocketgrease, Newster and Sabrina (Rosa Vasquez), who is the babe of the gang and very ruthless indeed. What this gang of silent but animated criminals plans to do is not clear. Is it a bank robbery or a race track caper? Is it an underworld power struggle or the paranoid delusions of Mr. Million and his minion Napolitano (Lou Fuoco)? I was never entirely sure and was left scratching my head at the end. We encourage promoting local filmmaking and I hope "Conned: attracts at least a Boston area audience. Unfortunately, the ambitious ideas are not handled well by the author, Luhn, and the many stories become muddled.