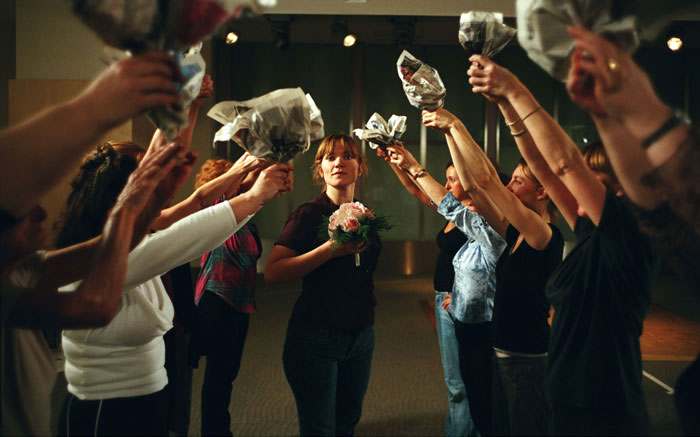 The most popular bridal magazine in Britain wants to do something different than selecting yet another Bride of the Year. Publisher Antoni (Jimmy Carr) and editor Vivien (Felicity Montagu) come up with a whole new idea: have a contest to select the most original wedding in “Confetti.”

The Confetti magazine team begins the selection process to find the contestants for the big prize of a half million-pound house. They are inundated with a bevy of bizarre nuptial plans: a dinosaur theme; Elvis dress ups; a daffodil route through Wales; ancient Rome; scuba diving; and, even, the joy of sex. They narrow their choices to Matt and Sam (Martin Freeman and Jessica Stevenson) and their love for Hollywood musicals, Josef and Isabelle (Stephen Mangan and Meredith MacNeill) and their passion for tennis and, finally, Michael and Joanna (Robert Webb and Olivia Colman), dedicated “naturalists” (read, nudists). These three couples vie for the coveted grand prize. Writer/director Debbie Isitt puts forth the idea that Confetti” is an outrageous mockumentary but in this day of even more outrageous reality television, her effort is lightweight at best. The mock doc starts off in documentary manner with talking head interviews with all the players and camera as watchful eye. But, as the contest unfolds, Isitt loses track of the fake doc and things become more conventional with multiple cameras and angles that make it look like a fictional movie than a documentary. The players in this faux contest are a collection of neuroses, family conflicts and ambitions where the wedding of the couples takes a back seat to winning. The weeks before the finale count down and the problems between the couples, the magazine moguls and the gay wedding planners, Archie (Vincent Franklin) and Gregory (Jason Watkins) move things along, sometimes amusingly, sometimes annoyingly – especially the problems with tennis couple Joseph and Isabelle. He has esteem problems from not being a great player; she decides, at the eleventh hour, to have a nose job that is done for nothing more than cheap laughs. Confetti” can be amusing but oftentimes, as with the nudist wedding plans, the gag grows stale. The mock doc effort is not carried through the film, making it lose steam until the multi weddings at the end. These are over blown, especially the Hollywood musical themed wedding which pretentiously takes on the airs of a 1930’s Busby Berkeley extravaganza. A more assured hand could have made it better.