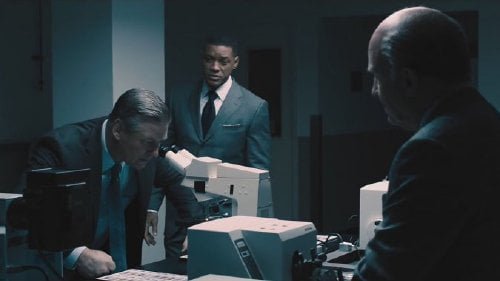 Nigeria-born Dr. Bennet Omalu (Will Smith) was a prominent forensic neurologist in Pittsburg in 2002. He was called upon to perform the autopsy on former Pittsburg Steelers star center Mike Webster (David Morse) following the player’s premature death at age 50. Webster, after his professional football career ended, suffered depression, drug and alcohol abuse and, finally, death. Dr. Omalu’s findings: Webster died of chronic traumatic encephalopathy (CTE), a condition caused by repeated blows to the head, the very thing that occurs regularly in pro football. The NFL denied Omalu’s findings but the pathologist stuck to his guns about the life-threatening danger to the players in “Concussion.”

After a brief prologue of four time Super Bowl center Mike Webster (David Morse) being inducted into football's Hall of Fame, we're introduced to Dr. Bennett Omalu (Will Smith) giving expert testimony on a witness stand. The Nigerian immigrant is prodded on his credentials and the seemingly neverending list he produces is both amusing and the man's one concession to pride (he will continually correct those who mistakenly address him with the title of Mister). The highly and diversely educated man works as a forensic neuropathologist in Pittsburgh, where he irritates his superior ('Glee's' Mike O'Malley) with his habit of talking to his 'patients,' the corpses he autopsies practicing his 'science of death.' When the city's own Webster lands on his table, Omalu is determined to find out just how a football great ended up homeless and demented, dead at the age of fifty. Finding nothing obvious, the young doctor wishes to continue with a series of extraordinary tests the coroner says he hasn't ordered in twenty-five years. When the budget cannot support them, the doctor goes out of pocket for twenty thousand dollars. What he eventually discovers is chronic traumatic encephalopathy (CTE), a degenerative disease brought on by repeated brain trauma. And Webster is just the tip of an iceberg. Supported by Allegheny County coroner Dr. Cyril Wecht (Albert Brooks), Omalu publishes his findings only to find he's being threatened by the NFL. Wecht advises him just what is at stake here, but Omalu persists through a vicious smear campaign as more professional players and their families are torn apart by a disease which can only be diagnosed after death. Then he gets a call from Dr. Julian Bailes (Alec Baldwin), former team physician for the Pittsburgh Steelers who tells him he's in trouble, but he's not wrong. Will Smith is on a charm offensive in this role. With his lilting accent and spiritual, caring nature, Smith creates Omalu as a modest man bewildered by the corporate skullduggery of the country he views as just beneath heaven. Brooks has been having a stellar late supporting career, imbuing his upstanding Wecht with wit and gallows humor. Baldwin is the weakest link, his Southern accent coming and going. Morse is heartbreaking as Webster, as are Adewale Akinnuoye-Agbaje ("Annie," "Trumbo") as the desperate Dave Duerson and former NFLer Matthew Willig as the raging, suicidal Justin Strzelczyk. The film also stars Gugu Mbatha-Raw ("Belle") as Omalu's love interest, Eddie Marsan as Alzheimer's researcher Dr. Steven DeKosky, blink-and-you-might-miss-him Paul Reiser as the NFL's Mild Traumatic Brain Injury Committee Chairman, Arliss Howard as the Steelers' current team doctor and Luke Wilson as NFL Commissioner Roger Goodell. This medical mystery/whistleblower thriller doesn't pull its punches with the NFL, but writer/director Peter Landesman's ("Parkland") film falters a few times, not only with Baldwin's performance but in the underwritten, perhaps superfluous love story. An implied threat to the pregnant Prema (Mbatha-Raw) is too ambiguous. Still, although Omalu's findings have finally been recognized, "Concussion" hard hitting truths may shock many. The statistics are shattering and education is still necessary. Per a recent Boston Globe article, even as recently as 2011, Tom Brady's personal fitness guru was promoting a fraudulent concoction said to prevent concussions. Grade:

The best thing in this conventionally told David versus Goliath biopic is Will Smith’s performance as the intelligent, kind and gentle Dr. Omalu - as part of his ritual when operating, asks his patients, “I need your help…” Smith uses the clipped, formal speech of an educated man from Africa and his gentle gaze to convey sincerity, ability and intelligence. Unfortunately, what goes on around the main character does not attain the same level as does Smith. The true to life story does an honest job in presenting Dr. Omalu – he documented the first case of CTE following Mike Webster’s untimely death – and his dedication to patients. Part of “Concussion” is a forensics detective story as the good doctor continues his research leading to an academic paper – partnered with his boss and friend, Dr. Cyril Wecht (Albert Brooks) – on the potential dangers against the very thing America wants – the gladiatorial battles on the gridiron pitting player against player. (Mike Webster, the film says, received over 70000 potentially damaging hits to the head during his NFL career.) This is a story about one man against the system – the system in question being the National Football League which denied all of Omalu’s, and others, claims to CTE and its real hazard to the players. This is where “Concussion” works best and Smith gets to shine in his character as he tenaciously fights his battle, which resulted in death threats to the doctor and his family. Albert Brooks also stands out as Dr. Wecht and gives the film its subtle comic relief that tempers its earnestly serious subject. Unfortunately, everything outside of this fascinating medical procedural is full of clichés. Gugu Mbatha-Raw plays Prema Mutsio, a pretty young woman also from Africa, who is perfunctorily introduced, obviously to be Bennet’s soul mate and future wife, wasting the talented actress in a two-dimensional character. Alec Baldwin, as former NFL team doctor Julian Bailes who sides with Dr. Omalu’s scathing findings, gives a routine supporting performance. Other characters are there to fill out the background only. Writer/director, adapting the 2009 GQ expose article, Game Brain, by Jeanne Marie Laskas, seems in over his head wearing the two critical production hats. His direction of Will Smith and certain other key characters is fine but the script is lopsided, in favor of the investigation, and does not flesh out the background characters to much prominence. All that being said, “Concussion” is a good investigative story that forced change in a business that, for many years, has owned Sundays.