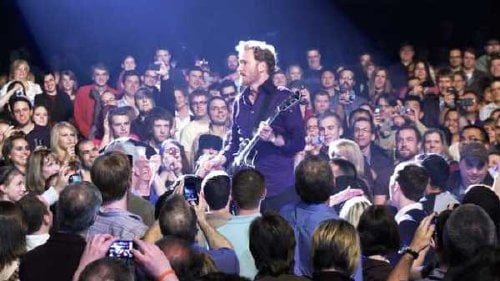 Following a brief, seven-month stint as host of “The Tonight Show,” Conan O’Brien was released from his contract, in a highly publicized dispute, and his last show aired on 22 January 2010. As part of his $45-million deal with NBC, he was “legally prohibited from being funny on television”. This sparked the performer to announce a 30 city live tour and first-time documentary filmmaker Rodman Flender tagged along to show why “Conan O’Brien Can’t Stop.”

After relinquishing the reins of 'The Tonight Show' after only six months while NBC pandered to former host Jay Leno, Conan O'Brien was filled with anger and hurt, but his big buyout contract stated that he could not appear on television, radio or the Internet for six months. So Conan channeled his rage back into comedy and decided to go on a nationwide tour for the fans who had supported him so ardently. But he also mounted the “Legally Prohibited From Being Funny on Television Tour” because, as director Rodman Flender ("Idle Hands") was to find out, "Conan O'Brien Can't Stop." After witnessing Conan's anger-fueled antics on his waning days as host of 'The Tonight Show,' only to experience them again when he fired back up on TBS later that year, the idea of rehashing the latest late night debacle once more was less than appealing. Fear not - although O'Brien is clearly using his tour to vent and exorcise NBC demons, the documentary Flender has made shows us many sides of the man. In its own way, "Conan O'Brien Can't Stop" resembles "Michael Jackson's This Is It," showing us the genesis of a show, the creativity behind it, the behind the scenes drama and the final product. Conan even also uses a lot of music in his act, and he's a lot funnier than Jackson ever was. Flender provides a quick recap of the 'Tonight show' drama, then O'Brien stewing at home, his wife one of the recipients of the passive/aggressive humor he uses to get real barbs across. Soon he's watching in amazement as his tour sells out in record time. O'Brien notes that 'nothing motivates to figure out what your show is than selling lots of tickets.' It's off to the races, and while the development of the show is fun, it's when the tour begins that Flender gets his best stuff. O'Brien is to be commended for having allowed his two faces to be seen in such a public fashion. The man is always there for his fans, signing autographs (he gets peeved over too many picture requests), and is quick to welcome and entertain all his guests back stage, celebrity and otherwise, but he gives an earful to assistants who don't protect him from just this sort of thing. Seeing what he goes through, we can sympathize with his criticism of having allowed a pre-show party which is clearly much more work than r&r for its star. One of Conan's two Coquette backup singers must be smarting after seeing what he had to say about meeting all her relatives. Back stage shenanigans are fun, though, never more so than when Conan lets fly with buddy Jack McBrayer of '30 Rock' ('I smell wet hay!'), who almost looks aggrieved by O'Brien's relentlessness. Conan's assistant Sona Movsesian seems to have the best job in show biz, often paralyzed with laughter in his company, but she also seems genuinely shocked to receive a compliment. Andy Richter seems to float above it all. That said, Conan's humor is also self-deprecating, especially as he surveys the 'empty streets' of Eugene, Oregon, their first stop. But if Conan soon grows exhausted on the road, it is often due to his own pace. He performs at Jack White's studios, dueting with the genius guitarist on the afternoon of a show. On a rare day off, after insisting he will do no work, he attends his Harvard reunion, appearing on stage with former classmates. Still, by the time he hits Bonaroo and learns he's been slated to introduce musical acts all day, the railing against agents and managers begins afresh. And he's a big hit with the crowds. "Conan O'Brien Can't Stop" is a fast-paced and funny primal scream as much as it is a concert film. We learn a lot about this hard working standup comic. Less than five months after ending his tour, Conan was back, legally, on TV.

When Conan was let go by NBC and prohibited from performing on the small screen, he could not simply be idle and wait for his probation to end. He had too much anger within and struck upon a comedy tour where he could voice this anger and frustration but in a funny way. Thus, was born “The Legally Prohibited from Being Funny on Television Tour” and Conan and many of his former Tonight Show staff, writers and musicians hit the road to perform 45 shows in 30 cities across the US and Canada. This is a candidly told chronicle that uses conventional documentary technique to follow the subject, Conan, from the development phase of the tour where the comedy routines, music and choreography are honed and sharpened. O’Brien says the whole process causes “nausea, self-doubt and fear…and that’s the good part!” From there, we get to see a live in front of an audience rehearsal before, finally, the tour begins with opening night in Eugene, Oregon. During the tour, the viewer is treated with copious behind the scenes footage of Conan lambasting and mocking his staff (he seems to be kidding and serious at the same time), schmoozing (willing or not) with friends, musician and crew families and the many fans begging for his autograph and picture – preferably, for more demanding fans, both. Conan grumbles about the constant flow of gawkers but he meets with his fans no matter what. Each of his performances, and most are given their bit of the film, is always new and different as Conan and his writers and music collaborators tweak the comedy and the songs. During the tour, Conan also brings on guests to help him out. Jim Carrey, Steve Colbert, Jon Stewart, Steve Kroft and Eddiie Vedder perform on stage and Jack McBrayer visits Conan between shows in an outright hilarious segment. Both on and off stage humor is bold and funny and I laughed out loud many times. Throughout the film Conan shows his anger at NBC, despite his $45-million settlement ($12 million of which went to his staff who had all resettled from New York to LA for “The Tonight Show”). As the tour progresses, the cathartic effect of his work allows him to get away from the anger and plan his life anew because “Conan O’Brien Can’t Stop.”