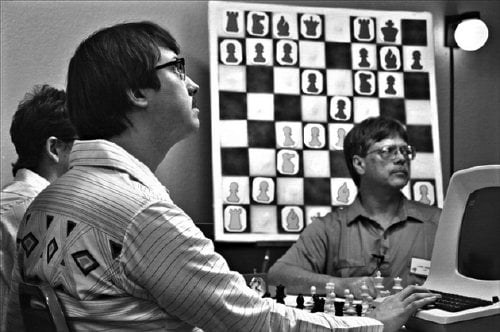 Remember (if you are old enough), back in the 1980s, when computers were only beginning to evolve? Man, though, was still superior in intellect and invention to the computer. That is about to change when machine masters man in “Computer Chess.”

1980. A group of computer nerds from prestigious universities and one independent programmer gather for a panel discussion on the challenges of programming a chess game. There's some consternation that the brilliant Dr. Schoesser (Gordon Kindlmann) hasn't arrived yet, but that doesn't stop the maverick, Michael Papageorge (Myles Paige, "Funny Ha Ha"), from declaring that his competitors, their programs and this panel are all boring. Before the weekend is over, he'll be the subject of a competitor's predictive algorithm and many of the participants will have awkward encounters with the couples' sex therapy group meeting in the same Holiday Inn as "Computer Chess." Writer/director Andrew Bujalski ("Funny Ha Ha") is known as one of the founders of the mumblecore movement. He may or may not like that categorization, but his films are the genre's high standard. With "Computer Chess," Bujalski's turning a page. This black and white, academically formatted comedy is like a retro, existential soap opera where nerds already puzzling out the machine vs. human paradox are totally flummoxed by a group of outwardly sexual new agers. I worked at Bolt, Beranek & Newman, a Cambridge company whose work was integral to the development of the ARPAnet (the forerunner of the Internet) during this time frame and I can testify that Bujalski's gotten so much right that his opening 'interviews' could fool many as archival footage. Then the fun begins, all emceed by long time Boston film critic and Suffolk University film studies professor Gerald Peary in his wry debut role as Pat Henderson, an event coordinator who takes every opportunity to note that one team 'has a lady competing.' She would be the aptly named Shelley (film editor Robin Schwartz), one of many to get a visit from Papageorge, looking for a hotel room to crash in ('We're the only two here who understand that programming has a feminine side.') As Papageorge roams the hotel corridors we learn what's troubling the teams about their programs, that the Pentagon is interested in the militaristic applications of their work, that dating is the future for computers and that there are cats in the laundry room. Young, troubled looking Peter Bishton (Patrick Reister) is in over his head when he finally gets to consult with Schoesser, arranges a literal hook-up with Shelley, then becomes the target of Dave, a member of the other group anxious for Peter to meet his wife. The near overlap of artificial intelligence and sex in a hotel conference room is just bound to merge by film's end and Bujalski handles it like a low budget parody of David Cronenberg with a dash of Shane Carruth for serious measure. "Computer Chess" will delight anyone who remembers the PDP-11, but you don't need to be a tech head to enjoy it. Bujalski's latest gets us thinking about man's relationship to the machine in side-splitting fashion.

Andrew Bujalski, in his filmmaking career, has created unique and varied works since his debut film “Funny Ha-Ha.” He goes nostalgic on his latest venture and brings us back to an age of innocence when the concept of today’s computer and communication industry was only a dream and a century away. The geeks and nerds that get together in the 80s are at the cutting edge of technology – at the time. Bujalski brings us into the middle of a computer chess tournament as the brilliant minds set up their copious amounts of computer equipment that will be used in a machine vs. machine battle of the chess board. Each team, with names such as TSAR V.3, LUKE V.1 and teams ADVANTAGE, DEEP SPEED and CAPA X, muster their human resources to set up the complicated computer programs for the three day battle royal of chess. The filmmaker divides “Computer Chess” into two parts. One part, most fascinating for someone who worked in that kind of environment with that kind of brainiacs involved, is the mockumentary about a fictitious chess tournament that heralds the change where machine can think faster than man. The second part follows several of the players as they prepare for the big tourney and get to know each other - there is a spark of passion between TSAR team programmer Peter (Wiley Wiggins) and the member of the MIT team, Shelly (Robin Schwartz). The most amusing character is Michael Papageorge (Myles Paige) an oddball programmer who spends the entire film trying to find a place to sleep in the full up hotel. The character is both annoying and amusing. “Computer Chess” works best when focused on the tournament. Organizer and key figure, Pat Henderson (film critic Gerald Peary), rules the proceeds with an iron fist and tries to control the uncontrollable. Pat is a grand master who takes pride in his ability to defeat any machine in a chess match. He lords over the computer-obsessed programmers and engineers and challenges the winning computer to a match. Henderson’s story is woven well into the fabric of the film and follows through to the film’s big climax of comeuppance. (For a film critic, Peary can act!) The attention that the writer/director gives to the look and feel of “Computer Chess” perfectly captures the day. To get the real video look of the 70s and 80s, he used an ancient (circa 1969) Sony AVC-3260 video camera. We are talking about early video and the film looks like it was made way back when. The computers and communications gear used is right on the money. A Digital Equipment Corporation PDP-11 makes a cameo appearance and the use of a phone coupler to communicate with a remote computer brought back fond memories of a simpler day.