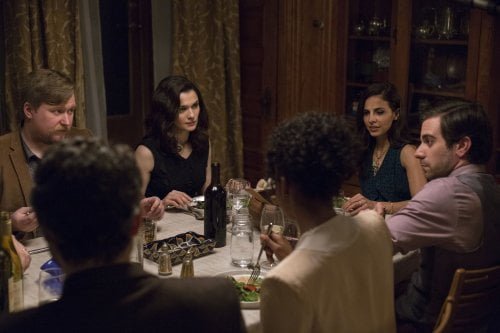 One woman shifts through time. She's a Bohemian college student in Portland, an ER surgical nurse, then a Chinese magician's assistant. In her latest incarnation, Alice Manning (Rachel Weisz) is a biologist who takes note of two men talking in their work cafeteria. She engages Clyde (Michael Chernus, "Mistress America") later, and, saying she knows no one after returning from years of research in Tasmania, is invited to a birthday party so she can meet new people. It's Clyde's workmate Tom's (Michael Shannon) party, but when Tom gets Alice alone, he calls her Jenny in "Complete Unknown."

Cowriter (with Julian Sheppard)/director Joshua Marston's ("Maria Full of Grace") third film sounds like a twisty mystery, but it's not. What it is is an exploration of change as a life choice, an opening up to adventure versus becoming stuck in a rut. Yet while Alice Manning's reintroduction into Tom's life has a positive effect on him, her more extreme embrace of reinvention has made her a lone pathfinder. Alice/Jenny is reaching out to a man from her past to find herself again, but her character is so unrelatable, an enigma akin to a con man, Marston's film becomes more a low budget acting exercise than a thought provoking cinematic experience. When we meet Tom at work, he's so focused on his latest agricultural report we deduce he's a workaholic. Back at his Brooklyn home with his lovely wife Ramina (Azita Ghanizada, Syfy's 'Alphas') there is tension, the birthday cake she picked up celebrating Tony not Tom (there's a lot of bumble about him going out to have the error fixed and he does leave and return - without the cake?). But the annoyance over the cake is, as most married couples will recognize, really masking a larger issue. Ramina, whose necklace Tom has admired, has just won a coveted slot in a two year jewelry making course in California. She expects Tom to go with her, but he's tied to his job. When Clyde arrives with Alice in two, he gets appreciative glances from the male guests. She's stunning and intriguing, breaking the ice talking about the Campbell frog she's studying in a nearby marsh, her recording of their song charmingly embarrassing. But as her stories continue - her 18 months in Mexico as Consuelo, her Chinese odyssey - folks begin to wonder, one guest, Sharon (Phylicia's daughter, Condola Rashad, "Money Monster"), becoming aggressively hostile. When the cake is served ('Who's Tony?'), the party is on a decided downswing, but Alice urges guests to forge ahead with their plan to go out dancing. We never do learn just what happened back in Jenny and Tom's hometown that sent her running, but this time when Alice slips away, Tom follows. They meet a woman, Nina (Kathy Bates), walking her dog and when she falls they help her back to her apartment. Alice slyly engages Tom in one of her games at Nina and her husband Roger's (Danny Glover), Tom easily slipping into his assigned role (you too can play act and end up eating Haitian grilled goat at a strangers!). Weisz and Shannon are two fine actors, so it is a pleasure to watch them, but Marston works too hard to make his marginal point. The film's one real nugget of wisdom comes from Tom when he describes how his job almost satisfies him, something worse than no satisfaction at all. The production is bare bones, sound austere except for those warbling frogs. "Complete Unknown" is a curiosity that left this critic indifferent. Grade: