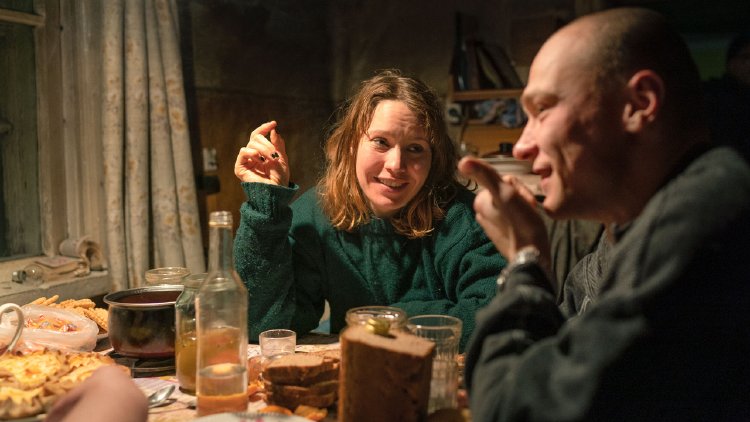 Finish archeology student Laura (Seidi Haarla) has been thoroughly seduced by the lifestyle of her lover, Russian literature professor Irina (Dinara Drukarova, "Since Otar Left"), in Moscow.  But Irina has backed out of a planned trip to the arctic port of Murmansk to see its petroglyphs, 10,000 year-old rock paintings discovered in 1997, encouraging Laura to take the trip on her own.  The disheartened young woman is dismayed to learn she will be traveling with a profane Russian miner (Yuriy Borisov) given to drinking copious amounts of alcohol, but she’s about to embark on a journey of self discover in “Compartment No. 6.”

On its surface, Finland’s shortlisted submission for the International Feature Oscar by cowriter (with Andris Feldmanis and Livia Ulman)/director Juho Kuosmanen ("The Happiest Day in the Life of Olli Mäki") is a romantic buddy comedy, but the filmmaker, inspired by Rosa Liksom's novel, has gone for something deeper, illustrating the detrimental effects of snap judgments and self-delusion.  Fear not, however, as “Compartment No. 6” is always entertaining, a warm and funny adventure capped with the perfect in-joke.

We feel for the Laura who tries to fit in with Irina’s academic crowd, ill at ease in her suit and buttoned up blouse, whispered about by other party guests.  She doesn’t appear to recognize that Irina is treating her poorly, publicly testing her with a literary quote she clearly will not know.

The woman who boards the train already looks a little different, dressed for comfort, her hair a bit messy.  After enduring the drunken attentions of Ljoha, who finds it hilarious that Finnish for goodbye is the same as for hello doubled and who asks if she is a prostitute (and whom Laura writes the Finnish for ‘FU’ when asked how to say ‘I love you’), Laura tries to enlist help from the female train conductor (Julia Aug, "Silent Souls") who won’t even accept a bribe, then finds third class quite full and not much more appealing.  When the train stops in St. Petersburg, Laura calls a distracted Irina who rejects the idea of her return before she’s even proposed it.

At the next stop, however, an overnight in Petrozavodsk, something magical happens.  Ljoha, who just won’t give up trying to win Laura over, gallantly protects her from a bully, and so she gives in, accepting his invitation to visit the ‘friend’ she stereotypes as a balalaika playing babushka.  Telling her they are going to ‘Yuri Gagarin,’ he picks up booze and, sure enough, pulls into a drive next to a mural of the cosmonaut.  Ljoha has brought Laura to visit his foster mom (Lidia Kostina) and she ends up doing shots with the funny and wise old woman long after he’s gone to bed.

There are several more surprises in store even well after the train reaches its destination, Murmansk itself far from the one-horse town I was expecting.  Most will probably make the same mistake Laura does when we meet her fellow Finn Saska (Tomi Alatalo), something Ljoha helps correct earning a well placed laugh.  Kuosmanen reflects his heroine’s opening mind with the character of that train conductor, who is a lot more human at the end of the trip that she appeared at the beginning.  He may overplay his hand directing Borisov, who transforms from junkyard to puppy dog, but it all works toward his end result.  As “Compartment No. 6” covers miles of wintery Russian terrain, it reminds us that who we are has a lot to do with where we come from.

Sony Pictures Classics releases "Compartment No. 6" in select theaters on 1/26/22.