Coming Home in the Dark 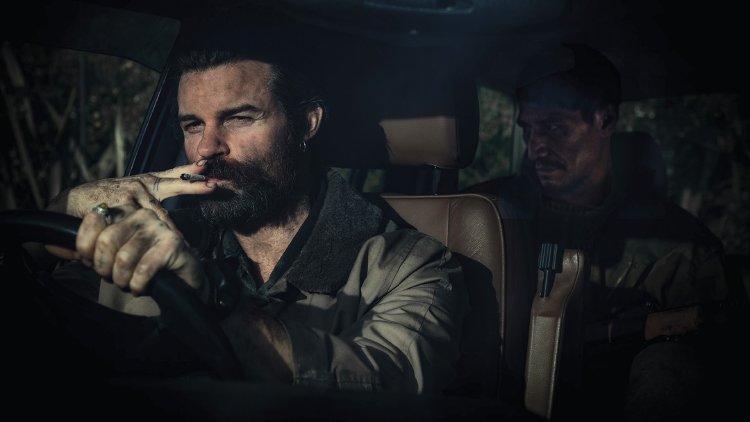 While hiking up a hill on New Zealand’s magnificent coast, teacher Alan Hoaganraad (Erik Thomson, "Somersault") comments to his wife Jill (Miriama McDowell) that ‘you get two eggs from the same basket and one’s this gentle, patient boy…’ implying that his other stepson is the opposite.  Ironically, the four road trippers will be approached by two male strangers out in this vulnerably remote landscape, the one armed with a sawed off shotgun informing Hoaggie and Jill that they’ll be “Coming Home in the Dark.”

Cowriter (with Eli Kent, Owen Marshall)/director James Ashcroft makes his feature debut with a chilling, brutal tale of the root causes of sociopathy.  Meticulously crafted, with cinematographer Matt Henley coupling pointed use of the unique landscape with character portraits drawn in dusk, the film leans more on psychology than outright gore, often artfully obscuring its worst moments.  This is the type of film able that inspires overwhelming dread with an overhead shot of a vehicle circling back on a gas station.  As Mandrake, the more assertive of the two murderous kidnappers, Daniel Gillies ("Spider-Man 2"), resembling a cross between Guy Pearce and Nick Cave, is all the more terrifying for his quiet matter-of-factness.

If at first the setup recalls the Aussie “Wolf Creek,” fear not as the filmmaker has a lot more on his mind than torture porn.  While the broader outlines of Ashcroft’s script may rely too strongly on coincidence, there are many insightful observations to be found in its dialogue.   Tension ratchets up in moments often mundane, a command to lie on a blanket suggesting imminent violence.  When a van approaches across the lake from where the initial encounter is taking place, we hold our breaths as we hear Jill’s, watching Hoaggie’s eyes dart about looking for a solution.  When it pulls away, Mandrake observes ‘You know, later on when you look back at this occasion, I think that right there is going to be the moment you wish you’d done something.’  Then Mandrake’s partner, Tubs (Matthias Luafutu, "Ghost in the Shell"), pulls up in the Hoaganraads’ SUV and they’re ordered to get back in.  ‘Where are you taking us?’ demands Hoaggie.  ‘Home’ never sounded like such an unwelcome destination.

This reverse road trip reveals both the film’s theme (‘There’s a difference between doing something and letting it happen. There has to be.’) and its destination, a home in three of the SUV occupants’ past.  Ashcroft offers many moments of hoped for escape, some quite clever in their construction, but he’s put his protagonist on a path that will find him in the same predicament that molded his vigilante judge.  Ashcroft also effectively sprinkles in other hints of the past, some as recent as the day in question, which help establish his foreboding atmosphere.

“Coming Home in the Dark” will set your teeth on edge early and never let up, but although its tone can verge on nasty, its execution reveals a born filmmaker.

Dark Sky Films releases "Coming Home in the Dark" in theaters and VOD on 10/1/21.