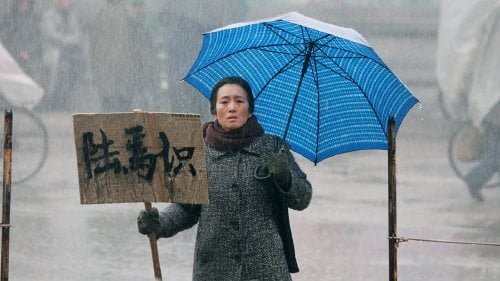 At the start of China’s Cultural Revolution in the 1960s, a professor, Lu Yanshi (Chen Daoming), was sent to a labor camp for political re-education. Years after his arrest, he escapes and returns to the city where his wife, Yu (Gong Li), lives with their daughter, Dandan (Huiwen Zhang). But, their reunion never happens when Lu is arrested, once again, mere yards away from Yu. Years pass and Lu is released from the camp fully rehabilitated. He returns home, again, but this time Yu does not recognize him, though he persists to open her eyes in “Coming Home.”

During the midst of the Chinese Cultural Revolution, Wanyu Feng (Gong Li, "Curse of the Golden Flower") and her teenaged daughter Dandan (Zhang Huiwen) are advised by an official that their husband and father, imprisoned for his political beliefs, has escaped and they must aid in his recapture. Yanshi Lu (Chen Daoming, "Hero") does attempt to return to his wife, but his daughter, a staunch Red Guard who barely remembers him, foils his plan. Released several years later, Yanshi is thunderstruck when his wife fails to recognize him and spends the ongoing months and years "Coming Home." Chinese director Zhang Yimou ("Raise the Red Lantern," "The Flowers of War") reunites with the star of his debut feature for the first time since 2006 for a simple and sad story of a family torn apart by Mao Zedong's Communist movement. While Zou Jingzhi's ("Riding Alone for Thousands of Miles") adaptation of Yan Geling's novel leaves some of Dandan's acts and their repercussions naggingly unexplained, Li and Daoming will break your heart. In a tense, rain-soaked scene, Yanshi navigates the rooftops in order to avoid the man watching his humble apartment building. Wanyu hears him tapping, but also sees her daughter arriving on a bicycle on the street below. Dandan confronts her father, who manages to slip a note beneath his door before escaping into the night. Dandan, who has just learned she's lost the lead in a Red Army ballet because of her father's status, goes to speak to the spying official while Wanyu reads the note asking her to meet her husband at the train station the next morning. But when Wanyu's forced to come out into the open to get his wife's attention, their reunion is circumvented once again, he recaptured, she bludgeoned to the ground. As the revolution comes to a close and the former professor is released, he's surprised to be greeted by the daughter who betrayed him. She takes him to her home, a textile worker dormitory, saying she needs to tell him something, but Yanshi heads on home to discover the devastating truth for himself, his wife calling him Fang and demanding that he leave. He takes up residence in an abandoned storefront across the street, caring for his wife under various guises, including a volunteer who reads her his own letters to her, all the while hanging onto the hope that his last letter, which advised he'd be arriving home on the 5th, will be mistaken for new as each month passes. And so it does, Wanyu going to the station each month holding a sign, staring past the husband who continues to restage his arrival. Li, with graying hair and small age lines, is lovely as the gentle, confused woman who remembers everything but the husband she yearns for. In a third act scene, we learn who Fang is and her broken delivery is devastating, yet also another declaration of love (it is frustrating, though, when Yanshi and Dandan visit a doctor that Dandan never reports the blow to the head her mother suffered at the train station as a potential cause of her condition). Daoming is the picture of devotion and forgiveness, his relationship with his daughter unaffected by her former brainwashing. In her debut, Huiwen is a self-righteous, bright-eyed fanatic turned humble daughter. The drama which begins in the pouring rain ends gently in light snowfall. The film's final image is a testament to marital love and devotion. Grade:

One of China’s most prolific directors, Zhang Yimou, has, for nearly three decades, created some of the most beautiful and grand films in the world. He also has made films that deal with ordinary people and their ordinary lives. “Coming Home” is of the latter category with its simple sad story of love lost to the ravages of dementia. Yu, when she tried to reunite with Lu after his escape, is struck down by a militiaman, causing her to develop psychogenic amnesia. When Lu is finally released and goes to Yu, he is shocked that she does not recognize him. Yu, very agitated, demands that Lu leave her home. This begins the story, based on the novel by Geling Yan and adapted by Jingzhi Zou, of Lu’s years’ long effort to try to get Yu to remember him, and them. How he goes about this makes for a touching and sad family drama and a look into the disastrous Cultural Revolution and its impact on the family, most of it negative. Zhang Yimou explores the effect of China’s cultural radicalism in the 1960s that pushed the country’s economy to the brink of disaster. These changes are shown through the eyes of Lu, Yu and Dandan, who aspired be the lead dancer in “The Red Detachment of Women,” a politically correct opera praising Mao and the Revolution. But, Lu’s arrest and re-education caused the young woman to be denied the part, ruining her chance to be a famous dancer. Lu, in his patient way, becomes the glue that brings his little family together, despite being a stranger in Yu’s eyes. “Coming Home” is a bittersweet tale told with deft skill by Zhang Yimou and his cast and crew. The film deals with real issues as well as a critical historical look at his native land.