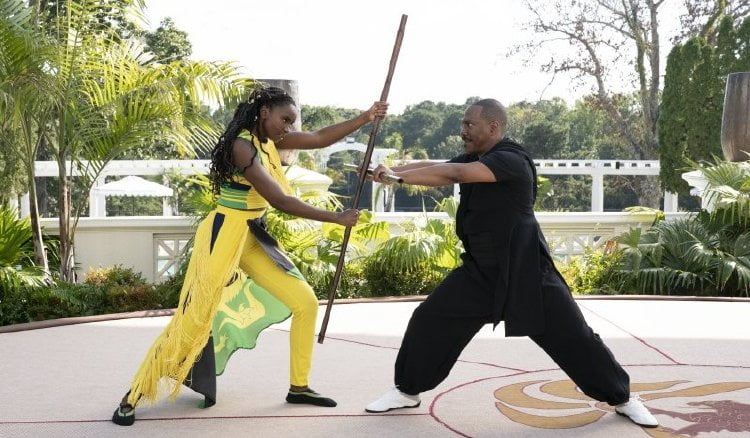 Now King of Zamunda, Akeem (Eddie Murphy), who has three daughters, is wrestling with the tradition of passing his reign on to a male heir when his eldest daughter, Meeka (Kiki Layne), is such a strong choice.  As General Izzi (Wesley Snipes) tries to position his son Idi (Rotimi) as Meeka’s groom with obvious hopes of taking control, Akeem learns of an unknown son, Lavelle (Jermaine Fowler), in Queens.  Akeem and his long trusted aide Semmi (Arsenio Hall) are “Coming 2 America.”

At one point, Lavelle tells his Hollywood movie-loving Zamundan personal groomer Mirembe (Nomzamo Mbatha) that ‘all we got are Super Heroes, remakes and sequels to old movies nobody asked for,’ an obvious reference to the 33 years that have passed since “Coming to America.”  Yet while the original’s screenwriters Barry W. Blaustein and David Sheffield have done little but flip their script, catching up with Akeem, Simmi and the colorful My-T-Sharp barbershop crew is a good-natured trip down memory lane.

King Jaffe Joffer (James Earl Jones) tells his son he’d like to experience his own funeral, which director Craig Brewer (“Hustle & Flow”) stages with big musical dance numbers featuring the likes of En Vogue, Salt-n-Pepa and Gladys Knight slightly adjusting lyrics to their big hits.  It is Joffer and his Witch Doctor Baba (Hall) who inform Akeem that he sired an illegitimate son (a flashback mixes bits of “Coming to” with new, digitally altered footage to explain how he didn’t know and the effort is pretty slick).  While Akeem’s Queens Queen Lisa (Shari Headley) is all for shaking up tradition, Akeem wishes to honor his now deceased father’s traditions and so heads back to NYC, returning not only with Lavelle, but his mom Mary Junson (Leslie Jones).  The women of the immediate Joffer family are not amused.

At first, Lavelle is miserable trying to fit in to Zamunda’s traditions, but Mirembe convinces him to be the ‘Prince of Queens,’ unknowingly suggesting he’s more like his dad than he knows.  As he faces the prescribed ‘Princely Tests,’ which include getting the whisker from a lion, Meeka takes pity on him, rightly deciding that he is not responsible for her father’s poor choices.  Meanwhile, Izzi switches tactics, trotting out his seductive daughter Bopoto (Teyana Taylor) to entice Lavelle, whose head is indeed turned – until he talks to her.  The boisterous Mary also manages to win over Lisa, further stacking the deck against Akeem.  By the time Akeem heads back to Queens, he’ll be looking in a historical mirror.

Murphy and Hall remind us just how much fun they can be in all their various incarnations.  Newcomers Jones and Tracy Morgan (as Lavelle’s Uncle Reem) provide the amusingly abrasive cultural clash.  Fowler is likable and well matched with Mbatha.  John Amos and Louie Anderson are back with Zamunda’s it’s-nothing-like-MacDonald’s McDowell’s and Trevor Noah cameos as ZNN’s news anchor.  Wesley Snipes overplays in the best way in the underwritten role of the General.

Outside of Murphy and Hall, though, the film’s best assets are its outstanding hair, makeup and costumes, the latter of which appears to have had the budget of several smaller films.  “Black Panther” costumer Ruth E. Carter has really gone to town, fashioning one eye-popping wardrobe after another, not only for prominent characters but dancers and performers.  We may see Noah for a matter of a minute, but his flashy, feathered jacket is unforgettable as are several of Murphy’s.   Carter turns Jones into an African Queen while Queen Lisa is an elegant vision.

We may not have asked for “Coming 2 America,” but it turns out to be an amusing lark.