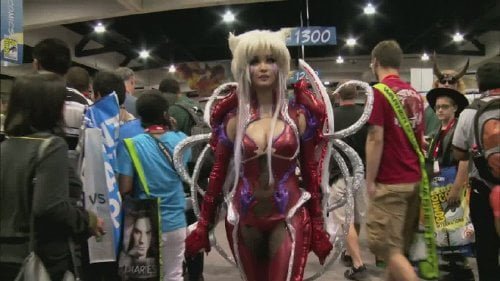 The San Diego International Comic-Con had sparse beginnings with only 148 attendees back in 1974. Decades later, the conference has become the Mecca for comic book, and many other, geeks with attendance tipping at over 100000 every year. Morgan Spurlock steps away from his usual on-camera involvement as he steeps us in “Comic-Con Episode Four: The Fan’s hope.”

Morgan Spurlock met Stan Lee the first time he ever attended Comic Con in 2009 and the legend suggested they make a documentary about the crazy convention. One year later, Spurlock was doing just that, but he made a decision - his fourth theatrical feature would not feature him - instead he wanted to showcase the event through the eyes of those who made it what it is, "Comic-Con Episode IV: A Fan's Hope." Morgan Spurlock's fourth feature documentary is the first in which he completely absents himself - no fast food fattening, searching for the world's most heinous terrorist or trying to place products to pay for a film on product placement. Instead Spurlock wanted to make a documentary from the fan's point of view and so follows five primary strands, with a few random threads and connective talking head observations from Stan Lee, Joss Whedon, Frank Miller, Kevin Smith, Guillermo del Toro, Matt Groening, Seth Rogen and Eli Roth. It's a highly entertaining piece that allows those of us who have never attended to be somewhat of a fly on the wall (there's not nearly enough observation of the lengths attendees go to in costume and makeup, let alone what happens after hours) while perhaps learning a thing or two (I, for one, never realized that portfolio reviews for budding comic artists were a major part of the mix). Those looking for in depth analysis of the symbiotic relationship escalating between the Con and Hollywood won't find it here. The film starts with Comic-Con's genesis told in voiceover to still photographs from 1970 that truly illustrates how the tiniest of seeds can spawn a great tree. Producer Joss Whedon pops in to express how Comic-Con is a celebration for all geeks where a Star Trek fan can commune equally with a fan of something else without getting into oneupmanship - 'Are we not dope? Aren't we amazing because we're this obsessed about something?' It's fascinating to follow Chuck Rozanski, the owner of Mile High Comics, the world's largest, as he panics about flat sales and lack of foot traffic in the section the convention is named after. He's trying to get bids on the rarest of Marvel comics - Red Raven - in the area of half a million dollars to ease his debts. There are two young men of completely different backgrounds - one whose parents started Star Trek conventions, the other in the Air Force - trying to break into the business and it is surprising who gets the break. Holly Conrad has a whole team building costumes and an animatronic creature in her garage to present a dramatic homage to the videogame Mass Effect for the 'Masquerade,' another form of audition for a different industry. James Darling and Se Young Kang are cast as 'The Lovers,' a couple who met at Comic-Con a year before. James has been in contact with people behind Kevin Smith's appearance to arrange a microphoned, spotlit marriage proposal in a convention hall emcee'd by the man himself. Geeky yes, but the last is disturbing, Se Young proving so clingy, James has difficulty getting away to pick up the custom made ring. Getting less of a profile, 'The Collector' proves more interesting than most of Spurlock's main characters as he's probably more representative of the crowd in general. The celebrity comments are most filmed against a white sheet, although we Stan Lee in action with the fans and the guy's incredibly charming and engaging, especially with kids. Kevin Smith's entertaining and Guillermo del Toro hits the nail on the head describing the joys of esoteric collecting - the pleasure is in finding the object which will make other collectors want to kill you! Harry Knowles is rolled out as head geek - who knew he was still relevant somewhere. "Comic-Con Episode IV: A Fan's Hope" is a fun documentary. One just wishes Spurlock had captured more moments like the one Eli Roth recounts about the first time he found himself between a Klingon and a Stormtrooper at a urinal.

It does not matter if you are a Comic-Con geek or not. Either way, Morgan Spurlock’s densely packed documentary will entertain and enlighten you as to the ways of the tens of thousands of comic geeks who attend the annual four day conference held in San Diego. Superhero film and video fans, though, are fast supplanting the comic book fans in numbers at the yearly event. Spurlock does a couple of things with his film. His roving cameras give us an idea of the scope of this event and how it puts the “fan” in fanatic. He also follows eight of the attendees who have their own agendas at the conference. One is an ambitious costume designer who hopes that her costumed play will grab the attention of filmmakers. Another is a comic book collector who is there to sell his rarest comic book, Red Raven Comics #1 (1940, the very first Marvel Comics superhero), for $500000. (His collection is so valuable he has it delivered to the conference by armed security guards.) One attendee even plans to propose to his girlfriend at the Q&A for self-admitted uber-geek Kevin Smith. The rest are all given equal shrift by Spurlock and crew. The shear number of celebrities who proclaim their loyalty to geekdom for “Comic-Con” is amazing as the likes of Smith, Eli Roth, Corey Feldman (well, I knew about him being a geek),Seth Green, Guillermo del Toro and Seth Rogen proudly declare their geekhood. Comic-Con icon Stan Lee is given good attention as he walks through the conference and talks to the fans. He is like a king walking among his subjects. There is a lot of material here, making ““Comic-Con Episode Four: The Fan’s Hope” feel a little long at times but that is just a nitpick. It is an entertaining documentary that also gives the non-geek an education on what a comic book superhero fan really is, which is kind of scary. The title, if you could not figure it out, is homage to the “Star Wars” saga.