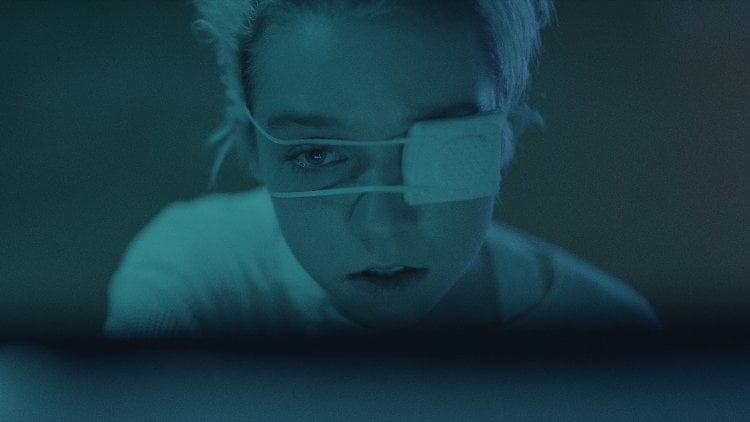 Sarah (Julia Sarah Stone) spends her nights in a sleeping bag at the bottom of a playground slide and her days trying to stay awake in high school.  She gets a respite with an invite to stay at her friend Zoey’s (Tedra Rogers) house, then spies an ad on a coffee house bulletin board for a paid sleep study and takes advantage right away.  But things take alarming turns when her study roommate Emily (Caroline Buzzanko) fails to return after just one night, no one will tell her just what they are studying and her nightmares become so increasingly horrific it seems they’ve “Come True.”

Without ever using the phrase ‘sleep paralysis,’ writer/director/cinematographer Anthony Scott Burns ("Our House") uses the unexplained phenomenon, one which has gotten a certain amount of notoriety after over a hundred otherwise healthy and young Southeast Asian immigrants died in their sleep in the early 80’s, as the driving factor behind his disturbing fictional sleep study.  The film is at its best as we begin to cotton on to just what  lead scientist Jeremy (Landon Liboiron, "Truth or Dare") and Dr. Meyer (Christopher Heatherington) are up to, having discovered a way to visually transcribe people’s dreams in order to watch them and then finding a fearsome commonality.  These sequences are creepy because of their indistinct images of dark shadow figures with glowing eyes, but the dreams that propel Sarah into their study come across as DIY art direction and the film’s climax goes off the rails trying to justify its title.  Still, Stone, who resembles a young Lillian Gish, is quite compelling in the lead; the score is up to more than the usual and enough of the filmmaker’s ideas are well executed to make this worth a watch.

We never do understand why Sarah avoids going home, riding past it on her bicycle as her mom calls her name, but she spends a lot of time in craftily named coffee joints (Lock and Stock, Take 5 – Time for Coffee).  After having been interviewed by Anita (Carlee Ryski) and let into the study, Sarah begins to notice Jeremy everywhere she goes – in a book store, walking down the aisle of a movie theater – until she tells him off.  After a number of increasingly disturbing nights, Anita has Sarah look at a series of pictures without explaining what they are, although we know they have been captured from her dreams.  Sarah doesn’t recognize anything, but the last one of a vague shadow causes such a strong reaction she’s ready to bolt.  Jeremy takes Sarah into his confidence to get her to stay, showing her another subject’s dream, but Jeremy’s unethical attachment to his subject will have grave consequences.

Burns favors widescreen close-ups of Stone, repeated shots of her cycling towards us and a desaturated palette, his dream sequences so drained of color they appear black and white.  We occasionally see Meyer observing the proceedings while wearing headphones, but other than berating Anita for her unauthorized photo stunt, he’s not well integrated into the whole.  Outside of the shared shadow phenomenon, there’s an unpolished quality to the screenplay with too many loose ends, like Sarah’s avoidance of home, or untethered one-offs, like a reference to Room 237, preventing it from wholly clicking.   “Come True” is the product of an interesting filmmaker still finding his feet while occasionally sticking the landing.

"Come True" will open in select U.S. theaters, digital platforms, and cable VOD on Friday, March 12, 2021 courtesy of IFC Midnight, and will be available in Canada on the same date courtesy of Raven Banner.

The Brattle Theater will be hosting a preview screening on 3/10/21 - tickets available here.