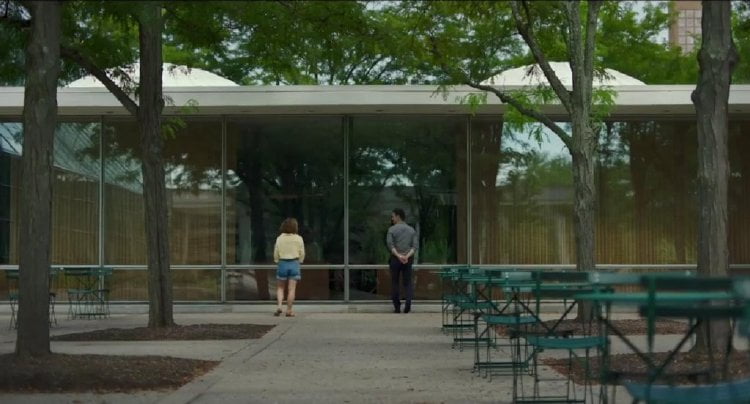 When his famous architect dad falls into a coma while on a speaking tour, Jin (John Cho, "Star Trek Beyond") travels from the West Coast to Indiana, checking into his father's room at the Inn at Irwin Gardens. While pacing outside on the phone, he notices a young woman, Casey (Haley Lu Richardson, "The Edge of Seventeen," "Split"), smoking a cigarette and bums one. Introducing themselves, Casey informs him she had planned on attending his father's talk. He professes no interest in architecture, but when she spies him in town later, she will begin to show him her favorite buildings in "Columbus."

Writer/director Kogonada's feature film debut calls to mind the famous quote 'writing about music is like dancing about architecture.' Placing his figures in cinematographer Elisha Christian's meticulously composed frames, the filmmaker uses Eero Saarinen's modern designs as a communication bridge between two strangers, a meditation on asymmetry and balance. Haley Lu Richardson's sensitive, open performance is invaluable to this concept, Cho's amused prodding to get to the root of her appreciation resulting in emotional outpourings that become the foundation of a deep friendship. The film is like a less comedic counterpart to "Patterson."

We first meet Casey considering Saarinen's First Christian Church, noting to herself that although the Cross adorning it and the clock on its tower are not centered, the building nonetheless is perfectly balanced (a trait echoed in Christian's compositions). Later she'll listen to her obviously besotted buddy Gabe (Rory Culkin, "Lymelife") relate a theory on attention versus interest. The Doctoral candidate teases Casey about her high school degree and we begin to wonder why this intelligent young woman hasn't furthered her education.

Jin enters the picture at the behest of his dad's protege and partner Eleanor (Parker Posey), telling her over dinner about the Korean belief that one must stay with the dying or they will wander the earth as ghosts. But although Eleanor is clearly devoted to the man, Jin appears to feel little more than obligation.

As Casey takes Jin to visit her favorite buildings in Columbus, he will eventually learn that she once met a famous architect who offered her the opportunity to audit her classes at Yale and intern at her New York City office while attending the University of New Haven, but that she loves Columbus. Besides, her mother (Michelle Forbes, AMC's 'The Killing,' affecting) is a recovering addict. Jin needs to reconnect with the father who is leaving while Casey needs to reconsider staying with her mother. 'Dad would have loved you,' Jin tells Casey. Both need to move on while the structures that move her, and increasingly, him, stay.

Kogonada's script is full of parallels like this. As Jin takes the vulnerable Casey under his wing, we learn that at seventeen he had a crush on Eleanor. 'Do you *like* like her?' Eleanor gently teases from Jin's bed after he's told her about the astonishing young architecture enthusiast he's met, the two actors reflected in mirrors throughout the entire scene. Another will take place in the film's closing moments as Eleanor assumes the role Jin's father once held for her.

But above all, "Columbus" is a film of visuals. When Jin presses Casey to discover what moves her about the Irwin Union Bank, Christian's camera moves to its interior, Casey's words muffled by the glass now in front of us as her silent expressiveness moves us. Under a covered bridge, Jin, enclosed by beams in the background, relates his father's disinterest to Casey, her opposing beams angled like angel's wings. Camerawork is almost entirely static, so we're made almost dizzy by the trees rushing past the interior of the moving vehicle which brings Jin and Eleanor to the hospital. Later, a similar scene is almost calming, Christian choosing a blander exterior for the effect. Casey's growing concern over her mother's whereabouts is showcased as she stands across the street from The Republic Newspaper Building, her mother's cleaning crew illuminated in its square blocks, "Rear Window" by way of Edward Hopper's 'Nighthawks.'

Richardson has made a giant leap forward with this role, her emotionally exposed rendering of Casey lovely. Cho's initially brusque manner softens in her presence, turning to tender concern. Posey is the picture of upended organization, her distraught Eleanor a jangle of emotion.

Koganada, who has written in depth about Ozu and Koreeda, has made a hush of a film that moves us with its characters' connecting contemplations.

Jin’s (John Cho) architectural scholar father collapses into a coma while on a speaking tour in the US Midwest. The young man, as his son, is required, by Korean tradition, to come to and stay by his father’s side, no matter what. But, they have been estranged for over a year and Jin resents the obligation. He meets a young librarian and local tour guide, Casey (Haley Lu Richardson), who, to his surprise, loves the architecture and helps distract him from his own woes in “Columbus.”

Columbus is the last place Korea-born translator Jin wants to spend his time, especially since he and his dad no longer talk to each other. His father issues do battle with the family pressure that he stays with his father until he dies or is taken home. Jin resigns himself to fulfill familial duty but does so with no love for his parent. He cannot wait to leave the city.

When he meets Casey, she helps distract him with her enthusiasm for her home town and its renowned architecture and the architects that made them. She refuses to leave Columbus, Indiana because of her mom, Maria (Michelle Forbes), a recovering meth addict who Casey adores and worries about. Jin sees the young woman’s potential, maybe in architecture and maybe not, to be something and encourages her to seek her leave and seek her calling.

Between Jin and Casey’s stories, hers is the most compelling and layered with emotion. Haley Lu Richardson gives real depth to her character and you agree with Jin: she should leave Columbus and find herself. Jin, on the other hand, is less dimensional as he fumes about his predicament and his father. You agree with him about Casey, though.

The city of Columbus, Indiana, that hotbed of modern architectural design, should be billed right up there with the film’s human stars. If you are a fan of architecture and its history, at least in Columbus, then all of the marvelous modern designs on display may make you want to vacation in that pretty town. Elisha Christian, with a still photographer’s eye for exquisite composition, uses the many buildings in the town, with balanced asymmetry, to showcase the town’s wealth of architectural design.