Colour Me Kubrick: A True…ish Story 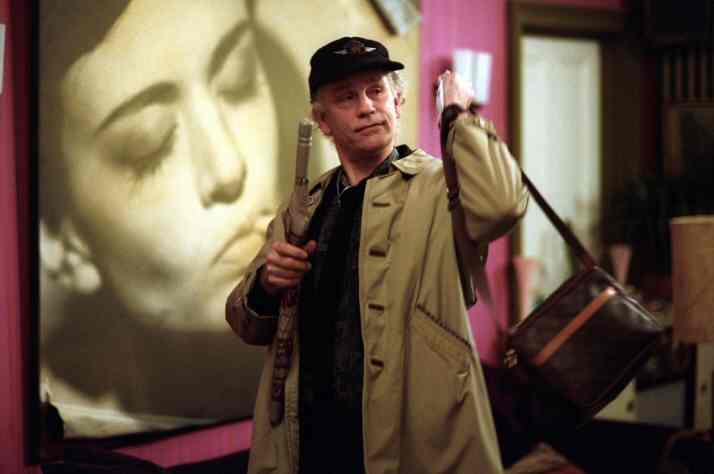 During the mid-90’s Alan Conway (John Malkovich) conned many people into believing that he was the reclusive film director Stanley Kubrick. Although he is openly gay, looks nothing like the famous (though little seen) helmer and knows little about the man’s body of work, time and again he worked his con to solicit drinks, money, sex and more from his unsuspecting marks in “Colour Me Kubrick.”

While the late film director Stanley Kubrick was making his last film, "Eyes Wide Shut," he began to get odd calls from strangers who insisted they knew him. All around London, a homosexual who looked nothing like him named Alan Conway (John Malkovich, "The Libertine," "The Hitchhiker's Guide to the Galaxy") was conning people into thinking he was the legendary filmmaker. Kubrick's former assistant Anthony Frewin and assistant director Brian W. Cook serve up "Colour Me Kubrick: A True...ish Story." This odd little film is buoyed by a hilarious performance from John Malkovich, yet plays like a BBCA sketch serial aimed at the gay and lesbian market. While the film is always watchable and frequently amusing it never adds up to much. We never learn, for example, why Conway chose to portray Kubrick except for the fact that the director was known to be a media-shunning recluse. Conway didn't go out of his way to learn anything about the man and never had seen even one of his films. What was the 'aha!' moment and how did he survive before it? The film begins riffing on "A Clockwork Orange," as two street types ring the bell of a Belgravia townhouse where a well bred older couple (featuring Honor 'Pussy Galore' Blackman in one of the film's copious cameos) are discussing the likelihood of the word 'anal' being used in the Telegraph crossword, all set to 'Clockwork's' majestic soundtrack. But after this opening, while mention is made of Kubrick's better known films, the filmmakers fail to work them into the fabric of their own film. Instead we follow Conway via a series of his victims. There's the first, aspiring designer Rupert Rodnight (Luke Mably, "28 Days Later," "The Prince & Me"), hit up for a string of brandies in a gay bar under the influence of ensuing film world fame. Heavy Metal band Exterminating Angels (Head On) hear themselves on a soundtrack while they pay 'Stanley's' way because the rich, you know, never carry cash. Restaurant/club owner Jasper (Richard E. Grant, "Gosford Park," "Bright Young Things") is backed by 'Stanley,' who never receives a tab and who never returns once he's outed by fellow diner New York Times reporter Frank Rich (William Hootkins) after his wife Alix (Kubrick alumnus Marisa Berenson, "Barry Lyndon"), hoping to confirm their Kubrickian encounter, finds a photo of the real man. Yet even after Jasper's financial ruin and a story in the Times, Conway continues his game, largely because the people who hung their hopes on 'Stanley Kubrick' were too embarrassed to press charges. Bloated, aging regional singing star Lee Pratt (Jim Davidson) is the last chapter, hooked by 'Stanley's' visions of a rapt Las Vegas, and the Blackpool-like setting of the penultimate act embodies the vaudeville atmosphere which pervades the whole film. This is not necessarily a bad thing as is most evidenced by Victoria Russell's ("Gothic") outlandish costume design for Conway. The real article dressed in uncharacteristic three-piece suits, but this wild attire is more befitting an eccentric artist, albeit a cross dressing one. The gay subtext of "Colour Me Kubrick" is never far from the surface (even Pratt's mother gets into the act, calling the man 'Mr. Cute Prick') which just goes to show that in this celebrity scandal driven world people are ready to accept just about anything from the famous. Malkovich, who designs his own line of clothing, collaborated with Russell in dressing his character. He also took Conway's known tendency to slip in and out of accents to instead channel the persona most expected by its audience. Where a poor rocker might get Conway's perception of upper class Brit, 'common man' performer Pratt gets Jewish Bronx. Malkovich's playing to the rafters is certainly amusing, but the film can't shake off its Borscht Belt by way of Britain lineage and its failure to dig beneath the surface.

John Malkovich is the real draw for the film buff to see “Colour Me Kubrick.” The actor, always a pleasure to watch and, sometimes, a real hoot, is marvelous as con man Alan Conway. As we watch the man profess his identity to his target dupes, we get to see Malky deftly alter how he plays his different personae of Stanley Kubrick. Conway plays his role as the famous director with different spins, each depending on the personality of his mark. Between Malkovich’s complex character, based on a real conman, and the outrageous costumes that Conway wears, you get something that is worth, for that, the price of admission. Director Brian W. Cook, with screenwriter Anthony Frewin, hits you over the head with the conman’s work and his cons start to get repetitive. Some are more intriguing than others with one, when a mark turns the tables on Conway, exposing the man as a charlatan, particularly amusing. Conway’s conning ways reach a zenith when he convinces a Brit TV star that he is good enough to headline in Las Vegas. The film overcomes the early repetition when Conway is arrested for his crime of impersonation and put under observation in an amusing continuation with his wicked ways. Fans of John Malkovich will most appreciate “Colour Me Kubrick.” For the rest, this is an amusing little blip on the movie radar screen.