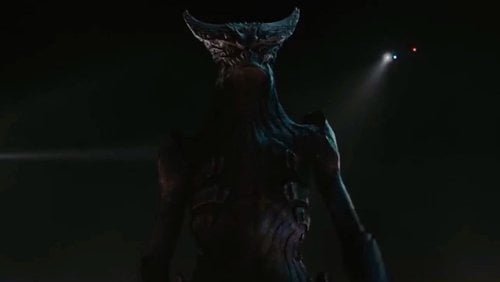 When Gloria (Anne Hathaway) comes home drunk in the morning for the umpteenth time, her boyfriend Tim (Dan Stevens, 2017's "Beauty and the Beast") throws her out. With no money and no prospects, she returns to her home town and is spotted on the side of the road by her old elementary school friend Oscar (Jason Sudeikis), who offers her a part time job at his bar. Gloria slips into her old habits, drinking the night away with Oscar and his buddies Garth (Tim Blake Nelson, "O Brother, Where Art Thou?") and Joel (Austin Stowell, "Whiplash"). Everyone is both fascinated and shaken up when a towering monster begins attacking Seoul, then vanishing into thin air, but Gloria is more disturbed than most when she connects the dots in "Colossal."

In his first feature, Spanish writer/director Nacho Vigalondo gave us a fresh twist on time travel with "Timecrimes." With his latest, he's spun travel itself into a whole new ball game by combining the Japanese Kaiju genre with a psychological character study into addiction and control. It's an intriguing concept, but Vigalondo hasn't dug deeply enough into his own mythology instead throwing his delightfully weird idea out there without a rigorous structure to support it. "Colossal" reminds me somewhat of last year's "Swiss Army Man," a film that was embraced by many for its bizarre reliance on a farting corpse, an unchecked indulgence which brought the film down along with what made it worthwhile. "Colossal" is the better film, but what at first makes for delightful viewing eventually devolves into the equivalent of watching two people play a board game. At first, Oscar seems like a genuinely good guy, one who's probably been holding a long time torch for Gloria. He shows up with furniture and a television for his old friend living in her parents' empty home. Flashbacks slowly fill in their childhood relationship, leading up to the event which first caused a monster to appear in Seoul twenty-five years earlier (shown in the film's prologue). When Gloria figures out her own connection to the Seoul monster rampages, she shows her three drinking buddies. They think it's cool, but Oscar has little regards for its consequences and begins to treat the phenomenon as his own form of entertainment (the film's funniest bit is the reaction heard from neighboring apartment buildings). When Gloria slips off with 'the good looking one,' Joel (played by Stowell as a good natured male bimbo), tensions escalate as does the situation across the Pacific. But Vigalondo's high concept raises too many questions he doesn't bother to answer. Hathaway gives a compelling performance as the party girl whose crisis brings introspection. Gloria is unlike any character she's played before. But other characters are less satisfying. Sudeikis's morph from enabling 'friend' to rage-filled control freak is too abrupt, the actor providing few hints into Oscar's true nature. Stevens's Tim, who reappears in the film's third act, makes less sense and leaves little impression. Tim Blake Nelson is a true third wheel, Garth's defining characteristic his drug addiction. The production contrasts Gloria's upscale NYC life with Tim and her blue collar existence back home. Seoul scenes seem like they're from a different movie entirely with their mass destruction, giant monsters (Gloria's looks like a horned Godzilla) and military retaliation, appropriate given this movie's fantastical elements. Grade: