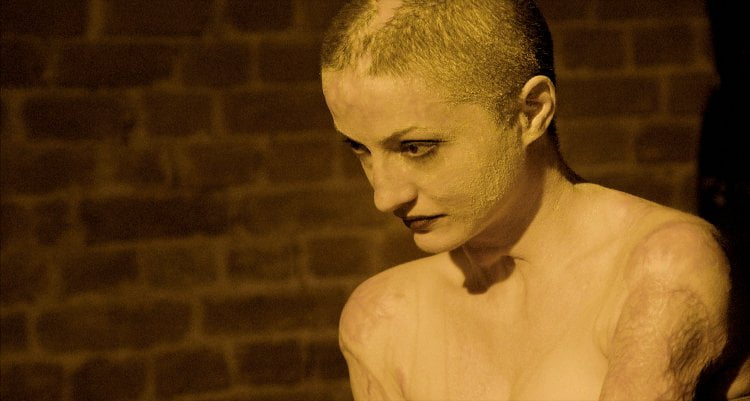 In October 2015, a crowd was gathered in Bucharest's Colectiv nightclub listening to Goodbye to Gravity sing about corruption when the band noted something that appeared to be on fire that was not part of their act.  Seconds later the club, which had no fire exists, was engulfed in flames.  27 died and 180 were injured, leading to widespread public unrest.  But that was only the beginning of the story unearthed by Sport Gazette’s Catalin Tolontan.  Writer/director Alexander Nanau follows threads exposing massive corruption and disregard for human life in Romania’s health industry in “Collective.”

This artfully unfolding documentary is part political thriller, part paean to investigative free press, the whole haunted by survivor Tedy Ursuleanu, a stunning architect who has turned her severe burning and disfigurement into something like national conscience performance art.  The film takes us through a roller coaster of emotional responses, at first shocking us (those familiar with Rhode Island’s 2003 Station nightclub fire will find much familiar in early goings), then giving us hope as ordinary citizens and journalists appear to affect change, before wrapping with a frustrating irony which will also be familiar to many Americans.

While the fire itself is tragic (insider cell phone footage is hair raising), the lack of safety features will pale in comparison to the political corruption which has rendered Romanian hospitals cesspools of infection.  No sooner has Tolontan uncovered Hexi Pharma selling heavily diluted disinfectants to hospital managers aware of the issue, than the Pharma head is found in a car wreck so devastating it is assumed a suicide or possibly even murder.  Victims with relatively minor burns who should have been saved were dying of infection.  Brave whistleblowers like Camelia Roiu, a hospital insider, releases video that compounds the issue, a burn victim seen crawling with maggots, indicating proper cleansing procedures have not been followed.  This after victims’ parents had been told there was no need to send their children to burn facilities outside of the country because Romania’s were ‘as good as West Germany’s.’  37 more died needlessly.

Nanau’s film can be heartening as we witness bravery on several fronts.  Tolontan and his female colleague Mirela Neag receive death threats and threats against their families, but keep on digging.  The new Minister of Health Vlad Voiculescu takes on the challenge of change as politicians clinging to a lucrative status quo fight him every step of the way.  Ursuleanu’s uncompromising and eerily beautiful photo shoot remains a constant reminder and Nanau checks in again to watch the optimistic woman being fitted for a robotic hand as her mother cries tears of thanks.

It is amazing to think of a sports journal producing such stellar investigative reporting, but also an uncomfortable reminder of the fragility of the free press.  While the people taking to the streets had an impact, a vast network of corruption could have remained concealed.  Nanau ends on a powerful note, one which again reminds that without journalistic sunlight, people are doomed to a diet of propaganda.  The fight never ends.  “Collective” may be a documentary about Romanian corruption, but its lessons are global and urgent.