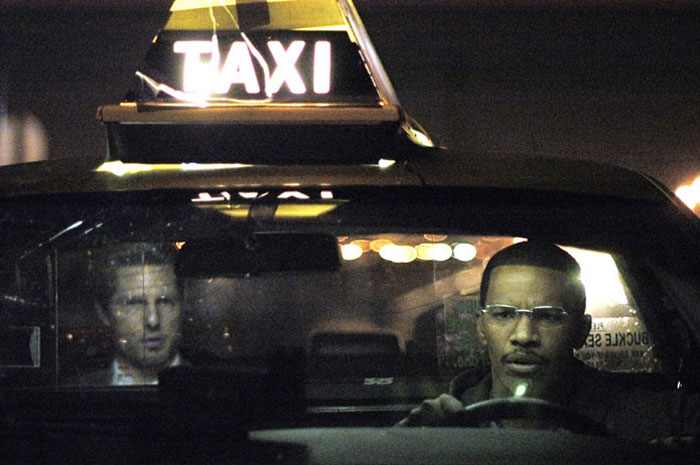 Max Durocher (Jamie Foxx) may just be an LA cabbie but he dreams of owning his own limo service and escaping the big city hubbub. That is until, one night, he picks up Vincent (Tom Cruise), a “real estate developer” who hires Max to ferry him across the city to his five scheduled appointments. When the first comes crashing down on the roof of the taxi, dead, Max realizes that Vincent is not exactly what he says he is in “Collateral”

Jamie Foxx plays everyman Max, who has toiled for 12 years behind the wheel of his taxi saving up for the day when he can start his own business – Island Limousine Service. Driving at night, because there is less traffic and better tips, he picks up Annie Farrell (Jada Pinkett Smith), a federal prosecuting attorney trying to put a major drug lord behind bars but who fears that she will fail. Considerate Max gives her a pep talk and convinces Annie that she can do it! Attracted to the kind cabbie, she gives him her card and suggests he call her. Things are looking up for Max – until his next fare climbs into his cab. Smooth-talking Vincent asks Max to drive him to his many appointments that night but the taxi driver refuses, saying it is against the rules. When his passenger flashes $600, with the promise of $100 more, Max can’t turn down the offer and they head into Los Angeles. As Max waits for Vincent to finish his first appointment he daydreams about the good life, his own business and a new fancy car when – crash! A body lands on the cab’s roof, smashing the windscreen. Max learns very quickly that Vincent is something other than a successful real estate speculator and is forced to ferry the killer, or die. Michael Mann has created a slick and flashy it-happened-one-night action yarn that keeps its frenetic tempo moving along as Vincent goes from one hit to the next with the reluctant Max in firm tow. The handsome, philosophical hit man goes about his business efficiently and deadly with his hostage helpless to do anything but comply or die. As they traverse LA the body count rises, the FBI get involved and Max is mistaken, by authorities, as the killer. It’s a very sticky situation for the haggard hack but Max, in the end, is inspired to act. “Collateral” is a solid actioner that works for most of its run time but reverts, in the end, to a damsel in distress cat-and-mouse game that, while fast-paced and visually exciting, is little more than a rehashed “Terminator.” The relentless Vincent simply wants to wrap up his night of mayhem and get the heck out of Dodge – no matter the cost to others, especially Max. The finale, unfortunately, slumps into the expected and loses what edge had been built up for three quarters of the film. Scripter Stuart Beattie writes an intriguing, if predictable, night-in-the-life story that benefits strongly from an everyman performance by Jamie Foxx and a dead on, chew the scenery supporting perf by Mr. Cruise. Foxx, who rose to the top with his electric performance in Oliver Stone’s “Any Given Sunday,” takes on the role of an ordinary Joe thrust into extraordinary circumstances. Much of the story is through Max’s eyes as he, first, woos Annie with his kindness and charm, then fights to survive against the wily hit man visiting LA to fulfill his five contract kills for drug kingpin, Felix (Javier Bardem). You can pretty much guess what’s going to happen but Foxx gives dimension to his portrayal of Max Durocher. Tom Cruise, on the other hand, does not have to be the anchor in “Collateral” and, as such, gets away with murder, literally, in his depiction of a ruthless, pragmatic killer who is very good at what he does. The handsome actor gives a tight, physical performance as a man with a mission who will brook no obstacle to finish his night’s work. I can only imagine that the megastar had an enormous amount of fun playing a bad guy for the first time in his long career. Supporting cast is an embarrassment of underutilized riches with the likes of Mark Ruffalo as LA police detective Ray Fanning whose snitch happens to be the first of Vincent’s victims. Jada Pinkett Smith, as the pretty lawyer endangered by Vincent, is here only as a plot device and, as such, gets little to do except be scared and beautiful. Bruce McGill, Peter Berg, Irma P. Hall and Javier Bardem are also along for the ride but are definitely passengers, not participants, in this Michael Mann saga. As we have come to expect in a film by Michael Mann, “Collateral” is a slickly done black comedy/drama that has both murderous mayhem and laughs (often the uncomfortable kind) to keep you entertained. Techs are provided by a skilled collection of craftsmen that give the film an exciting look, from the dynamic lensing by Dion Beebe and Paul Cameron to the nighttime scenery of Los Angeles. One scene, the best in the film, takes place in a huge nightclub, packed to the rafters with partiers and invaded by Vincent (with Max forced to tag along) and a slew of heavily armed cops and FBI agents hunting the killer down. It’s refreshing to see a major star play out of his usual role, especially for one as big as Tom Cruise, and let the icon status take a back seat to the supporting character they portray. It’s nice to see someone as huge as Cruise give the limelight to someone on the rise, like Foxx. Then again, Mann and company provide the megastar a role he could really wrap his arms around.