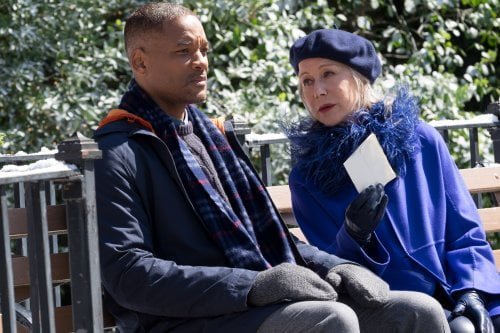 Having shut himself off from the world after losing his six year-old daughter, Howard (Will Smith) questions the meaning of life by writing letters to Love, Time and Death. He may have shunned everyone, but he receives surprising answers to those letters and with the support of loyal friends, he reawakens to life's "Collateral Beauty."

We may not be surprised that Will Smith might be drawn to a sappy, false wallow in grief and uplift, but how did Helen Mirren, Kate Winslet, Edward Norton, Keira Knightley and Michael Peña read Allan Loeb's ("Just Go With It," "Rock of Ages") screenplay and still sign up for this project? There are not one, but two 'twists' at the end of this film, neither earned, both preposterous in light of what has come before. As Madeleine, the leader of a grief support group, "Moonlight's" Naomie Harris adds a beatific calm that lifts the film from its feel-bad/feel-good contrivances whenever she's on screen. A brief prologue in which the go-getting advertising guru Howard tells his staff that their customers are motivated by Love, Time and Death, shows a once dynamic, beloved leader. Three years later, a graying Howard, his face a scrunched frown, will only engage in spending days setting up elaborate domino designs only to topple them, a metaphor for what's about to happen to his company. Partner Whit (Edward Norton) is desperate, hoping to salvage his and everyone else's work by selling out to Omnicorp, a company that has offered $3 over share value with a promise to keep all employed, but Howard won't even utter a 'yes' or 'no.' Whit meets with Claire (Kate Winslet) and Simon (Michael Peña) and suggests they hire the same private investigator his ex-wife used to catch him cheating to gather evidence of Howard's unsound mind. The friends aren't really comfortable with the idea, but they have no other recourse. Sally Price (Ann Dowd, "Compliance," HBO's 'The Leftovers') strikes pay dirt quickly, retrieving Howard's letters from the U.S. mail. As luck would have it, Whit's wandering eye is stopped by Amy (Keira Knightley), an actress awaiting an audition who believes she's improved his ad line. Whit's so smitten he follows her right into her next gig at a struggling off-off-off Broadway theater run by Brigitte (Helen Mirren). He makes a proposition - if Amy, Brigitte and third actor Raffi (Jacob Latimore, "Black Nativity," "Ride Along") will play Love, Death and Time in response to Howard's letters, he will underwrite their play. Of course this is the type of screenplay that loves to 'make connections,' so as Whit coaches Amy, Claire shepherds Raffi and Simon Death, they all receive their very own fairy godmothers to solve their own problems (Whit's daughter hates him, Claire's biological clock is winding down and Simon has a movie cough that doesn't bode well). Howard's interactions with the actors, whom he believes only he can see, finally drive him into Madeleine's support group, the one he's been staring at through the window of a snowy street. It is Madeleine who tells him of the woman who told her to be aware of 'collateral beauty,' as she sat outside her dying daughter's hospital room and how she remembered those words when she finally began to reconnect with life. Director David Frankel has made spirited films like "The Devil Wears Prada" and even worked sentimentality in "Marley & Me," but "Collateral Beauty" is more like his "The Big Year," all over the place and ultimately forgettable. He's gotten uneven performances from his ensemble, Smith one note of grief as he cycles against NYC traffic, Mirren overplaying with spritely mischief. Winslet and Knightley are a wash, neither here nor there, Peña treated as an afterthought. Norton's Whit is the closest approximation of a real person. Latimore adds some much needed spark. But this ensemble could stand on their heads and it wouldn't make a whit of difference because the story is so obvious, saccharine and nonsensical. By the time we get to the 'big reveal,' my only impulse was to throw rotten fruit at the screen. The final, collateral surprise makes no sense whatsoever, a sprinkling of faux mysticism that is this film's final insult. Grade: