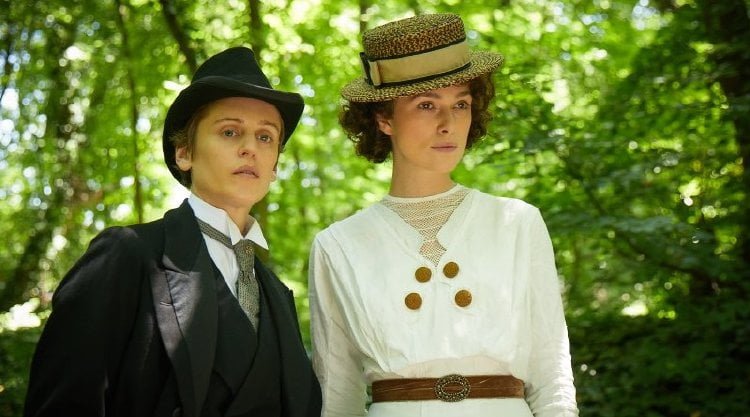 The salons of the Paris Belle Epoque were astonished when notorious author Willy (Dominic West) introduced the ravishing teenager at his side as his wife. Sidonie-Gabrielle Colette (Keira Knightley) was the county daughter of an army friend who could provide no dowry and when Willy, who lived large, could not afford to pay the writers of his 'content factory,' he turned to his young wife, whose lightly fictionalized memoir became the first of their smash Claudine series. But as their marriage opened up, scandal feeding their business, the young unacknowledged writer broke free as "Colette."

cowriter (with his late partner Richard Glatzer)/director Wash Westmoreland ("Still Alice") has made a stunning period biography dealing with all the intricacies of France's most famous female author through her first, educational marriage, but one comes away from "Colette" feeling that perhaps its corsets have been buttoned a little too tightly. While Willy philanders and Colette explores her lesbian side, once both with the same woman, Westmoreland plays it all oddly chaste, more filtered sensuality than earthy eroticism. The young Gabrielle of Saint-Sauveur-en-Puisaye is quiet and demure pouring tea for her parents and Henri (Willy was a nom-de-plume), but after he leaves, she slips away for 'a walk' that turns out to be a surreptitious barn romp. In Paris, when Henri's society pals look down their noses at the country girl, she tartly responds that 'the wild days are just beginning.' But after a note tips her off to her husband's dalliance with a prostitute, one they can ill afford at that, she heads back to the arms of her mother, Sido (Fiona Shaw). Despite his roguish and manipulative ways, Henri is not only charming, but truly loves his wife, and so he woos her back. At first, he's dismissive of 'Claudine at School,' but when their furniture is repossessed and he finds it emptying a drawer, he brings it to his publisher. It's such a smash, it not only spawns three sequels, but a brand, 'Colette' dresses, soaps and perfumes flooding the market. A play adaptation introduces Algerian actress Polaire (Aiysha Hart) and when Colette adopts her stage namesake's short bob, it too becomes the height of style. Colette and Willy are Paris's celebrity couple, their company desired by all. When rich, coquettish American Southern belle Georgie Raoul-Duval (Eleanor Tomlinson) invites them to dinner, then enjoy a flirtatious evening, Willy noting her attraction to his wife. He turns down her offer of a nightcap, but encourages Colette to go. Intrigued by their sapphic coupling, Willy visits Georgie on the sly and Colette is furious, not by the adultery, but the deception. But she turns it all into a scandalous book which Willy is able to capitalize on not once, but twice. Then Colette meets the Marquise de Belbeuf (Denise Gough, "Juliet, Naked"). The woman known as Missy dresses like a man and is infatuated with the young author, their performance of 'The Dream of Egypt' at the Moulin Rouge in 1907 ending in a kiss which instigates riots. Willy takes up with young 'Colette' fan Meg (Shannon Tarbet), the four coexisting amiably, but Missy's independence influences her lover and when Willy sells the rights to Colette without consulting its true author, it proves the final straw. Knightley really goes to town in that scene, eyes blazing, her fury intense. Those eyes do a lot of her work here, whether questioning, learning, playing or seducing. She keeps her character on an even keel, initially naive perhaps, yet always daring. A padded and bearded West is typecast, his portrayal not as deep but on target, especially registering the truth of his final loss. The film's biggest surprise is Gough, who expresses all level of yearning while exhibiting restraint. Cinematographer Giles Nuttgens ("Hell or High Water") frames characters in ways that highlight their environs, a closeup of Colette with her mother celebrating rural beauty. At one point, he captures Willy's disappearance as a literal puff of blue cigar smoke. Costume design, hair and makeup ingeniously segue Colette's appearance from rural to urban, feminine to masculine. The film's screenplay, while reserved, does a fine job of analyzing both the evolution of an artist and an unconventional marriage. This modern spin on the period piece, featuring two collaborators ahead of their time, is a far more complex work than the recent "The Wife." "Colette" is a wonderful sink into the most daring inhabitants of a celebrated era, its central character reflected through various lenses before delivering her to us whole. Grade: