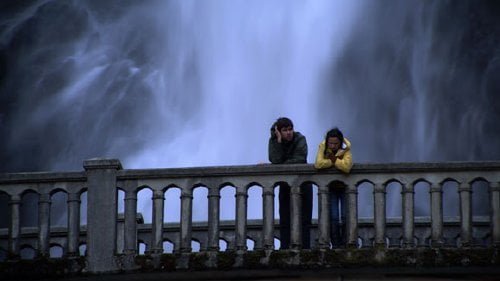 Although very intelligent, Doug (Cris Lankenau) has a short attention span when it comes to life. Instead of continuing his education in forensic science, he moves in with his sister, Gail (Trieste Kelly Dunn), and takes a menial job in an ice-making factory. When his ex-girlfriend, Rachel (Robyn Rikoon), moves back into town and, shortly after, disappears, it is up to Doug to dust off his forensic skills and, with the help of co-worker Carlos (Raul Castillo), get to the bottom of her vanishing in “Cold Weather.”

Doug (Cris Lankenau, "Quiet City") regales his sister Gail (Trieste Kelly Dunn, TV's 'The Craigslist Killer') and their parents about how he ended up as a restaurant intern chopping carrots while studying forensic sciences. Now back home in Portland, Oregon, he moves in with Gail and gets a job on the night shift at a local ice factory. When his ex-girlfriend visits from Chicago, Rachel (Robyn Rikoon) hits it off with Doug's new work buddy Carlos (Raúl Castillo). Then she disappears from her hotel room in "Cold Weather." Writer/director Aaron Katz ("Quiet City") moves across coasts to create a unique American indie. While his last film, 2007's "Quiet City," was much like a New York City based "Before Sunrise," his latest is a creature unto itself, a 'mystery' that really isn't, a 'disappearance' that is concocted all to hang the everyday lives of young people making connections on. We observe the discoveries of new friendship as Doug turns Carlos onto Sherlock Holmes books and Carlos reciprocates with his alter ego as Latino club DJ, but the meat of the film is in the quiet, supportive acceptance between Doug and his sister Gail. Doug is clearly content, in no hurry to pursue forensics although open to probably returning to his studies. We see him reading, "Raffles" written by Conan Doyle's brother-in-law, and he tells Gail he thinks he'd like to buy a pipe to 'help him think.' He's more into the moment, convincing his sister to play hooky from work. It is Carlos who spurs him to action on Rachel's behalf, insisting that Doug is the one 'who knows about this stuff.' Doug employs basic tools of the trade, like shading the indentations on a notepad with a pencil and connecting Rachel's surprising new interest in baseball with the numbers revealed. "Cold Weather" displays more confident filmmaking than "Quiet City," the restraint in less is more. There are a couple of glitches - a rain soaked Rachel enters a cafe whose windows reveal a dry exterior and Gail's 'office' seems set in a room in someone's apartment - but the lingering takes on Oregon shores and outlying Portland streets, the shots of rain on windshields pull you into the mood Katz has set. The 'action' starts suddenly and ends almost as abruptly, beginning with Doug and Carlos's investigation into Rachel's motel room and ending with Doug and Gail's stakeout of Rachel's contact. Rachel herself becomes incidental and it is telling that Gail's hair is artfully arranged at film's end like the wet tendrils framing Rachel's face when we met her. "Cold Weather" is about eating Swedish Fish and driving through fluttering pennants to an unseen finish line. It is a film that derives its tone from the Northwest coast that seeps into the characters who live there.

This is a clever and entertaining whodunit is a solid entry into the mumble core pantheon of movies from multi-hyphenate Aaron Katz (director-writer-editor). Slacker Doug has zero ambition and proves it by moving back home to Portland Oregon, crashing at Gail’s place and taking the most menial jobs. He was promising, once, but he gave up his dream to be a forensics expert. He settles, though, on hauling ice for minimum wage. With Rachel’s return, then disappearance, he is invigorated, even buying a pipe to put him in touch with his inner Sherlock Holmes. For the first 36 minutes, nothing really happens as Doug meanders through life. Then, a minute later, he receives a call from Carlos, “It’s an emergency!” This is when “Cold Weather” finds its stride as Doug and Carlos go sleuthing for clues to the disappearance of Rachel. They are shocked and surprised over her unseemly past, which includes online pornography, dealings with the Mob and the loss of a great deal of their money. Throw in a mysterious cowboy and Katz delivers an oft-funny, well crafted detective story with a couple of unlikely heroes rescuing an equally unlikely damsel in distress. This is Alan Katz’s first feature directing job and he shows maturity both at the helm and as storyteller. He handles his decidedly non-veteran actors with skill and evokes likable, funny performances from all. The obvious low, low budget is a mere obstacle for a filmmaker who uses intelligence, talent and humor to tell an entertaining yarn.