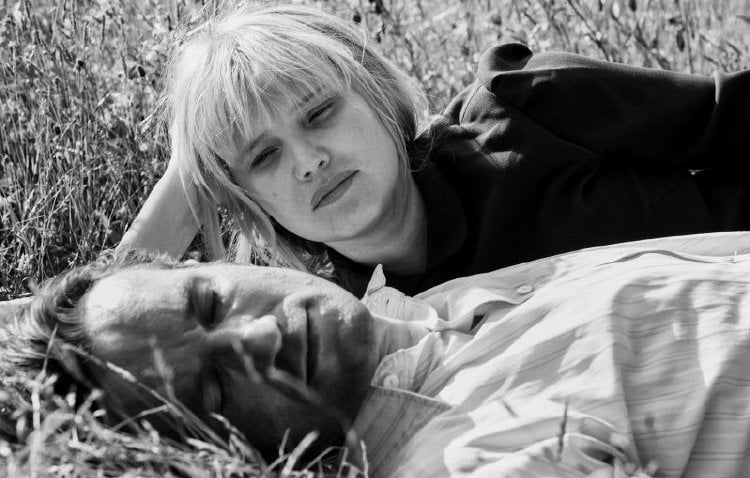 In post WWII communist Poland, Wiktor (Tomasz Kot) travels about the countryside with Irena (Agata Kulesza) and Kaczmarek (Borys Szyc) recording the authentic folk music of its people in order to launch Irena's vision, a folk arts ensemble she calls Mazurek. In 1949, hopefuls are brought to audition and a beautiful blonde, Zula (Joanna Kulig), manipulates her way into the spotlight, catching Wiktor's eye. Their love affair will continue for fifteen years as Zula's contentment in the East clashes with Wiktor's need for the West in their own, personal "Cold War."

Polish cowriter (with Janusz Glowacki)/director Pawel Pawlikowski was making films in his adopted home in the UK until he returned to his home country to make the Oscar winning Foreign Language Film "Ida." Having reconnected with his past, Pawlikowski found the inspiration for his next film in the story of his own parents, loosely fictionalized in "Cold War." As he did in "Ida," cinematographer Lukasz Zal shoots in black and white academic ratio, as perfect a choice for the grim landscape of postwar Poland as it is for the illuminated evenings of mid-50's Paris. "Cold War" is beautiful to look at, its music evolving through its years and locations, but I never felt the love between Zula and Wiktor. The 88 minute film charts the relationship during 7 points in time and place. As Zula achieves her dream of escaping poverty by becoming Mazurek's star performer, Wiktor is appalled by the state interference which has cost his former lover, Irena, her creation (Wiktor's relationship with Irena feels a lot more organic, more real, than his continuing longing for Zula). With Kaczmarek now in charge, the troupe sings praise to Stalin performing in East Berlin in 1952, Kaczmarek eagerly looking towards Moscow, Wiktor towards defection. Zula fails to show up at their meeting place and Wiktor slips out alone on a cold, snowy night. After the fade to black which marks each passage of time, we find Wiktor playing jazz piano in Paris in 1954. Zula meets him for five minutes in secret, their meeting awkward. The following year, Wiktor travels to Yugoslavia to see her perform. Kaczmarek arranges for his arrest, but Yugoslavian police simply put him on a train back to Paris. Two years later, Zula again appears in Paris, this time their relationship at its most contentious. Wiktor's working on a film score and Zula is married to an Italian Wiktor produces a recording of Zula singing a more soulful version of the song she first sang with Mazurek. But Zula is famous in Poland and a nobody in Paris and accuses Wiktor of no longer being the man he was in Poland. But Wiktor cannot quit her and returns to Poland two years later only to be thrown into a hard labor camp. Zula says she'll get him out. Five years pass and 1964 finds them both broken, Zula a drunk now married to Kaczmarek, Wiktor's physical punishment having left him unable to play the piano. They sit together in the snow in front of a ruined church, 'Let's go to the other side' a suggestion of dark innuendo. That ending has as much double meaning as the film's title, but was also one of the few times the film affected me. There is much to admire here, Pawlikowski's structure leaving us to fill in historical blanks which do not need to be spelled out because we learn everything we need to know by the changing situations of these two characters. But while this film has moved many, I never felt a true love connection here. Rather this is lust coupled with ambition on Zula's part, the two broken people at tale's end together because they shared their highest points of happiness together. Wiktor's attraction to Zula reminded me of men who claim that the crazier the woman, the better the sex. These two people are clearly incompatible, she operating on survival instincts, he reaching for something higher, the intellectualism of Paris society. Music is their only common ground, but even that is not what drives Zula who instead is looking for the fame and fortune her talent may bring to her. Kulig commands the camera, but "Cold War" kept me at an emotional distance. Grade: