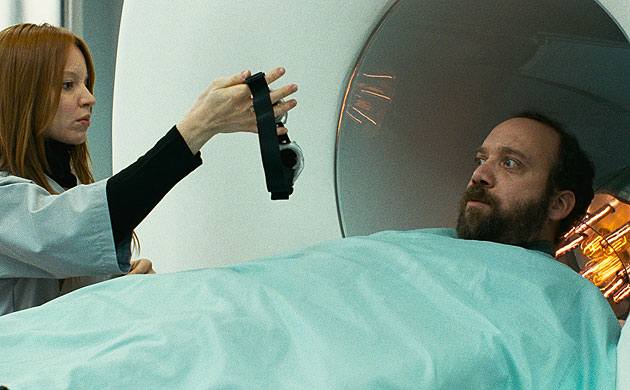 Paul Giamatti (Paul Giamatti, "Sideways," HBO's "John Adams") is having a hell of a time getting his head around his performance in rehearsals for a stage production of Uncle Vanya when his agent semi-seriously suggests he read a New Yorker article about soul storage. Giamatti finds Dr. Flintstein (David Strathairn, "Good Night, and Good Luck.," "The Spiderwick Chronicles") in the Yellow Pages, and is finally convinced to ease his suffering by having his soul extracted temporarily, but little does he know that Flintstein trades with a Russian Black Market in "Cold Souls."

Writer/director Sophie Barthes says she is inspired by surrealism and chafes at comparisons to screenwriter Charlie Kaufman, but there is no denying that her feature debut plays like "The Golden Compass" without the depth crossed with "Being John Malkovich" with far less wit. "Cold Souls" takes an interesting concept and presents it, but fails to poke and prod the idea much. Playing himself, Giamatti makes his soul-altered states either too obvious (insensitivity to a friend with a daughter on life support) or too subtle (his 'rental' of a Russian poet's soul doesn't make him much different than the man we began with, especially considering the 'poet' is a woman, other than his confidence on stage). Of more interest than Giamatti is Nina (Dina Korzun, "Last Resort," "Forty Shades of Blue"), a Russian 'mule' whose transatlantic soul transporting is sucking her own. When Nina's boss Dimitri (Sergey Kolesnikov) tasks her with obtaining the soul of a famous American actor for his spoiled soap actress wife Sveta (Katheryn Winnic, "What Alice Found," "Failure to Launch"), he thinks he's getting Al Pacino, but Giamatti's is the only acting soul Nina is able to find. Meanwhile, Paul isn't happy and, after confessing to his flabbergasted wife Claire (Emily Watson, "Breaking the Waves," "Synecdoche, New York"), returns to the lab on Roosevelt Island to get his soul back only to find his locker empty. He traces Nina, who has since become a fan after renting some of his movies, and she agrees to help him get his soul back - in St. Petersburg. Barthes makes a running gag out of the fact that Paul's soul looks like a chickpea (based on one of her own dreams where this happens to Woody Allen), but again, the visual presentation of other souls and the possible meaning behind their appearance isn't delved into much. The film does have a nice look, however, shot by Barthes' partner Andrij Parekh ("Half Nelson") in pre-dawn pastels. The soul extraction facility in St. Petersburg is like a cold war factory compared to the sterility of Flintstein's all white, high tech lab. A dreamlike depiction of Paul's soul hasn't been well thought out, however, concentrating on childhood with no nod to the creativity that had made it desirable to the Russians. Barthes also frustrates with her treatment of Olga (Anna Dukova), a woman who works at an orphanage and whose soul is passed off as that Russian poet's. Korzun gives the most interesting performance, initially in a trancelike state, later letting her 'own' personality, albeit tinged with the residue of soul transportation, coming through. Korzun's Nina is more alive when she is herself, even as the actress shows the strain of her job as the film progresses. Other players include Michael Tucker ("L.A. Law's" Stuart Markowitz) as Paul's play director, initially perplexed, later overjoyed. For some inexplicable reason, Lauren Ambrose (HBO's "Six Feet Under," "Starting Out in the Evening") plays the part of Stephanie, a Flintstein employee who does nothing but greet clients.