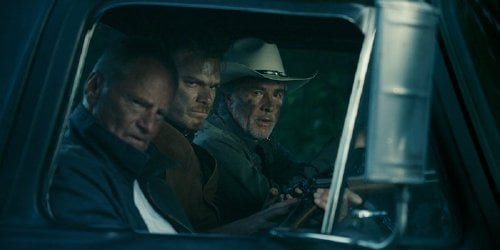 Richard Dane (Michael C. Hall) awakens in the dark to a noise in his house. He takes a pistol from its hiding place and goes down stairs to confront a burglar. A clock striking the hour startles him and the gun goes off, killing the intruder. This brief incident in time will impact Ben’s quiet life when the dead man’s father, ex-con Ben Russell (Sam Shepard), comes to avenge his son, Freddy’s (Wyatt Russell), death in “Cold in July.”

When his wife awakens him because she's heard a noise, Richard Dane (Michael C. Hall, Showtime's 'Dexter') nervously loads his revolver, ventures down the hall and spies an intruder in his living room. The clock strikes, startling him, and he shoots and kills the unarmed man. Detective Ray Price (Nick Damici, "Stake Land," "We Are What We Are") assures him he has nothing to worry about, that Freddy Russell was a known criminal. Price also informs him that Ben Russell's (Sam Shepard, "August: Osage County") just been paroled from Huntsville Prison and when the man rolls into town for his son's burial he pays too much attention to 8 year-old Jordan Dane (Brogan Hall) turning Rich "Cold in July." Director Jim Mickle ("Stake Land," "We Are What We Are") and his Cowriter Nick Damici seem to be traveling around the U.S. telling regional genre tales. Adapting the Joe R. Lansdale novel, this time they're in East Texas circa 1989 to plunge us into a tale of an Everyman facing vengeance before a second act twist resets our expectations. The film isn't wholly satisfying, raising questions it never answers, but the film boasts fine performances from Hall and especially Johnson, who's turning into a character actor of note. If at first "Cold in July" seems to rely on the kind of bone-headed character moves that haunt bad horror films, stick with it, as things change the more Rich pushes on Price, unsatisfied by the detective's assurances, the more unsettling things become. He becomes part of an unlikely trio, including Ben's old Korean war buddy now private investigator Jim Bob (Don Johnson, "The Other Woman"), and what their investigation leads to is dark indeed. And yet, despite the intriguing turn of events, the film's central theme about fathers and sons never quite gels, as Rich's relationship with Jordan has no parallels in the Russell story, and police involvement in the criminal element of the story is left dangling. The movie is more engaging as a character study of the Everyman given a peek at a world he wishes he was never dragged into. Hall, sporting a not-quite-convincing abbreviated mullet, is uneasy from the start and the small town celebrity achieves for having killed a home invader doesn't sit well. We feel his panic when his son's put in jeopardy and his distaste for violence, even when his sense of justice rationalizes it. Johnson's the added color, a steadying, sometimes humorous presence. Shepard here is a man of little words, but his ability to threaten with a smile is chilling. As Rich's wife Ann, Vinessa Shaw ("Eyes Wide Shut") is strangely disagreeable, just as Damici is initially too conciliatory, showing Price's hand. A nostalgia for movies is evidenced with scenes set at a drive-in showing "Night of the Living Dead" and a video store that had me reminiscing for the days when one perused physical packaging to choose a film. Cinematographer Ryan Samul's ("Stake Land," "We Are What We Are") choices often make the film seem like a Western, where strangers walk into local businesses with agendas, brawls break out in bars, shootouts involve multiple singular engagements and the good guys rest their battle weary bodies on the front porch. (He cannot, however, hide the fact that Jimbob's cherry red Cadillac was not, in fact, damaged in an on screen crash.) Jeff Grace's ("Stake Land," "We Are What We Are") music, though, mimics John Carpenter poorly, sounding like any old cheap horror synth score.

Based on the Joe R. Lansdale 1989 crime novel of the same name, director and co-writer Jim Mickle (with Nick Damici) tells Richard’s story following the unexpected moment of mayhem in the dark. The killing gets mixed reactions from the townsfolk, especially Sheriff Ray Price (Nick Damici), who does not treat Richard’s “self defense” with due concern. The ambivalence of the police and word that Ben Russell is coming to town forces Richard to make his home a fortress of barred doors and windows. It is not enough, though. Things take a turn when Richard sees the wanted poster for Freddy Russell at the police station and realizes that the man he killed in his living room was NOT Freddy. Richard and Ben become unlikely allies o get to the bottom of what is a massive police cover up and more, including the involvement of the Dixie Mafia. The earnest crime drama lightens somewhat with the arrival of a flashy private eye, Jim Bob Luke (Don Johnson), in his fire engine red Cadillac convertible, who decides to help Richard and Ben. Michael C. Hall plays Richard in a justifiably bewildered, almost detached, way as the events in his life make no sense, and endanger his wife, Ann (Vinessa Shaw), and son, Jordan (Brogan Hall). Ben’s arrival and the sinister threat he evokes is soon tempered when Richard proves (in a grizzly scene) that the man in the grave is not Freddy. From here we enter the realm of corruption, deceit and particularly disturbing snuff crimes. “Cold in July” is a gritty crime drama that winds its way up its violent path that reminds me of the finale of Paul Schrader’s 1979 film, “Hardcore.” There is a tawdriness to the crimes committed that evokes sympathy for the heroes that take the bad guys down.