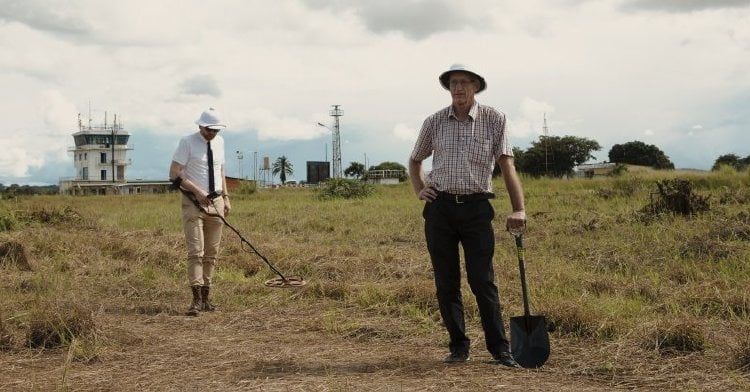 In 1961, Swedish UN Secretary-General Dag Hammarskjöld's championing of emerging African nations being governed by their own peoples made him a target, so when his plane crashed on a trip to broker peace in the Congo it was immediately regarded as suspicious. The truth has never come out, investigative material still classified after all these years. Danish director Mads Brügger, along with Swedish investigator Göran Björkdahl, set off to uncover the truth, but his investigation led him into one that was far more disturbing than "Cold Case Hammarskjöld."

With conspiracy theories tumbling out of the Oval Office and a tide of white supremacy rising across the land, the release of "Cold Case Hammarskjöld" couldn't be more timely. At turns incredibly entertaining and jaw-droppingly horrifying, there's never been anything quite like it, its maker warning at the outset that 'This could be the world's biggest murder mystery or the world's most idiotic conspiracy theory.' After uncovering a lot of damning or downright creepy evidence, Brügger unsettles us by admitting that he's not interested in Hammarskjöld's legacy, calling him a goofy character (he was anything but) and telling us he's more intrigued by the weird threads he keeps pulling on. Dressing all in white like, he says, his piece's 'villain,' Brügger embraces theatricality and props, anchors his documentary between two hotel rooms where he narrates to African secretaries Saphir and Clarinah who transcribe via typewriter and occasionally comment on or question his increasingly wild tale. The man's a bit of a prankster, his staccato diction equally abrasive and comical. Traveling to the crash site (the plane was buried there in 1962), Brügger lays out what he and Björkdahl will need - two shovels, a metal detector, pith helmets and cigars ('I don't smoke,' Björkdahl wryly informs him). Interviews with still living native witnesses tell how moments before the plane was to land, the airports lights went out. A second plane was heard as was gunfire or explosions. Charles Southall of the NSA reports having heard a recording indicating that Belgian pilot Jan Van Risseghem, known as 'The Lone Ranger,' shot down the plane. We see a photograph of Hammarskjöld's body at the crash site with a playing card tucked into his collar, one which Brügger is told was the ace of spades, known both as 'the death card' and a calling card of the C.I.A. There was also someone present at that crash site who becomes Brügger's villain. When documents on Hammarskjöld are found within the Truth and Reconciliation Commission reporting that South Africa mounted in the wake of apartheid’s end, they point to the South African Institute for Maritime Research. SAIMR was founded by Keith Maxwell, a man who called himself the organization's commodore. But the more Brügger looks into him, tracking other named officers who deny the existence of SAIMR, the more the entire thing sounds like a hoax perpetuated by a nut job. Then he finds an old newspaper advertisement for SAIMR soldiers and turns up a few, most notably Alexander Jones, who not only confirms the organization's existence, but claims it was a secret mercenary group funded by MI6 and the C.I.A. established to destabilize African nations and maintain a white majority. He also confirms the most shocking rumor Brügger turned up, that Maxwell purposefully injected black Africans with the AIDS virus under the guise of inoculating them against it. Is it true? Hard to say, as Brügger includes an end title in which AIDS experts say this is close to impossible. His own irreverent manner has been on display throughout, like when he seems to enjoy Van Risseghem's widow's utter dismissal of him. The piece of metal shot through with holes which Björkdahl's father said was taken from Hammarskjöld's plane is debunked. And yet Jones's testimony is as believable as Maxwell's SAIMR officers Goor and Groenewald's are suspicious. If you are up for an unconventional, multi-threaded investigation with unsolved mysteries and loose ends, it is fascinating to tumble down a rabbit hole with Brügger as your guide. Grade:

On 18 September 1961, UN General Secretary Dag Hammarskjöld was en route to Ndola, Northern Rhodesia to negotiate a ceasefire during the civil war that caused the Congo Crisis. As it approached its final destination, DC6 crashed in a fiery ball, killing all on board. Never satisfactorily resolved, Danish filmmaker Mads Brugger reopens the murder mystery of “Cold Case Hammarskjold.” At one point during Brugger’s musings over the death of Dag Hammarskjold, the filmmaker says, to paraphrase - what began as one thing, turned into another. Those were my thoughts exactly as I watched “Cold Case….” The first half of the interestingly structured documentary is about the last hours of the popular UN General Secretary and the controversy involving his death. The speculation at the time was that the plane was shot down by a mercenary flying for the rebel forces. Or, that a bomb was placed on board before takeoff. Or, it was a tragic pilot error. Or, as the filmmakers make the case, it was a conspiracy led by mystery man Keith Maxwell and his clandestine and shady white-supremacist South African Institute for Maritime Research (SAIMR). The second half of this historically compelling documentary is about Brugger’s search for the truth and all of the paths he has to follow, with the many dead ends he encountered. The frustrations, false leads, startling discoveries and talking head interviews with those who may have been involved in the assassination – or not – do, in fact, make “Cold Case Hammarskjold” a film that started as one thing and became something else. The filmmakers do not give definitive answers to the many questions about Dag Hammarskjold’s untimely and tragic (for the world) death. And, they raise even more questions as to “why?”