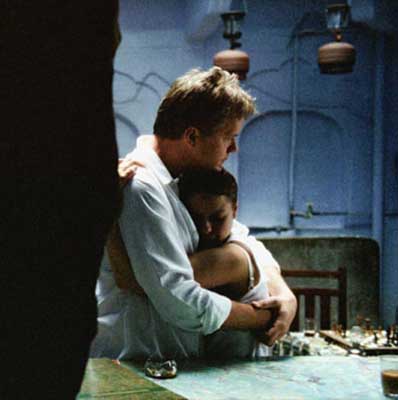 It is the none-too-distant future and genetic engineering has altered the face of mankind. Wide spread use of in vitro fertilization has weakened the human gene pool and a law has been passed to prevent genetically similar people from mating. If they do, the resulting pregnancy will be terminated and the offending act will be erased from their mind for the violation of “Code 46.”

Director Michael Winterbottom and scripter Frank Cottrell Boyce have created a vision of the future and it doesn’t look too good. Rampant genetics have divided the world in two. On one side, in the controlled environment of the cities, are the privileged, untarnished by genetic engineering and allowed to travel once issued a papelle – a combination passport, visa and insurance policy. On the other hand, the shanty-towns that sprang up between the cities and the encroaching deserts are filled with non-citizens – those whose genetic structure is tainted by the inbreeding caused by world-wide use in vitro fertilization. William Gold (Tim Robbins) is an insurance detective sent to the Sphinx Insurance Company in Shanghai to investigate a case of forged papelles. William, traveling on a temporary, 24-hour papelle, has taken an “empathy virus” that enhances his intuitive powers to permit him to get to the bottom of the forgeries by asking his subjects a few simple questions. He is smitten with one of his interrogation subjects, Maria Gonzalez (Samantha Morton), even after he deduces that she is the document trafficker. He follows her after work and the two soon tumble into a passionate, short-lived affair. Then, William must return home. But, the detective cannot get pretty Maria off of his mind and obsesses over the young woman – a mood change that is apparent to his wife, Sylvie (Jeanne Balibar). Then, he learns that, since his investigation at Sphinx, three people carrying the faked papelles have died. His boss (Shelly King) sends him packing off to Shanghai once again. This time, though, he is looking for Maria as a lover and not a detective. He tracks her down outside of the city and learns that she was pregnant with his child. The pregnancy was aborted and all memory of William was erased from Maria’s mind. The investigators problems multiply when he overstays his own official papelle and is stranded far from home with a woman who doesn’t remember him. Winterbottom and Cottrell Boyce keep the sci-fi elements of “Code 46” as background story that drives the actions of its protagonists but takes a back seat to the love story between William and Marie. Unfortunately, neither the romance nor the science fiction is given enough shrift in this future world story that eschews high technology for psychological tensions. The film holds kinship to “Blade Runner,” for obvious reasons, but the story foregoes the flying cars and killer androids for a simpler tale about the dangers of uncontrolled genetics and the love story between William and Maria. CGI effects take a back seat to conventional camera techniques such as high saturation and bleaching to give a washed out, futuristic look to “Code 46.” Use of exotic locales in China and the Middle East and sparsely populated city scenes take you into William and Maria’s worlds as the doomed lovers spend their brief but intense time together. The undercurrent of genetics run amok – so much so that most people would be incestuously involved in almost any relationship they have – is the always inhibiting fact in their lives. “Code 46” looks like a sci-fi film without trying to look like the future. Technology, in this future world, has not advanced much beyond where we are now and the high tech gadgets are more an enhancement of what exists today rather that anything new and different. The social mores depicted – Oedipal relationships, restricted travel, the controversy over genetics – all stem from our present and the filmmakers simply extrapolate the current issues into their future story. The acting is about as near to basic as is possible. Tim Robbins and Samantha Morton, as William and Maria, are virtually the only characters of any real note throughout the film. A problem I have, though, is that I never understood the attraction or chemistry between these two – unless you take a real leap and accept that their close genetic ties would facilitate a passionate relationship in a few short hours. This would be a big leap. Small roles are well handled but just too miniscule to make a real difference. Techs are tops for a relatively low budget film. Cinematography by Alwin H. Kuchler and Marcel Zyskind (who also shot Winterbottom’s harrowing film, “In this World”) is striking, at times, especially when it gets out into the world of cities and deserts. Production design by Mark Tildesley gives the futuristic look but still grounds things in the reality of today. Modern Shanghai really fits the bill as a city of the future. Clever manipulation of language that combines English, Spanish and Asian dialects into a Spanglish-like hodgepodge smacks of how things are going. (Even today, I can walk across my American home town and hear Spanish, Arabic, Vietnamese/Cambodian, Russian and one or two Indian dialects and barely hear a word of English. It will be a very small leap to a time when a combination of languages rolled into one will be the norm. Such is the world melting pot we live in.) I can’t believe that I would say this but the problem with “Code 46” is that it is too short. There is ample opportunity to flesh things beyond the ambiguous, under-finished film we have here. I don’t want things handed to me but there are things – like the instantaneous passion between William and Maria – that seem too rushed and under-defined. It is an interesting but flawed effort.