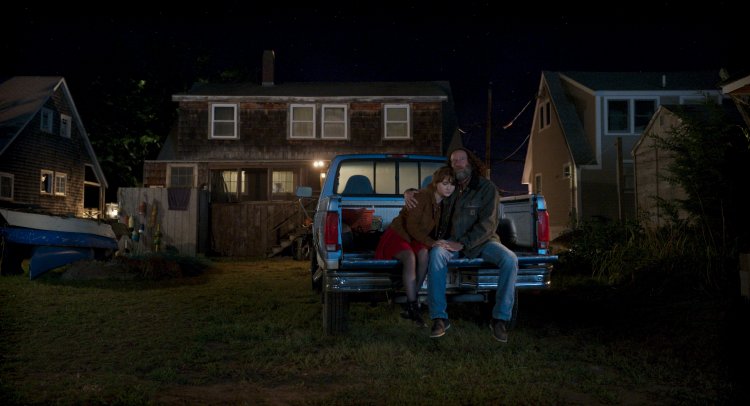 When high school senior Ruby Rossi (Emilia Jones, "Brimstone," TV's 'Locke and Key') signs up for choir, she will endure not only the snarky comments of her bestie Gertie (Amy Forsyth, "Beautiful Boy")     but exhaustion.  Ruby is expected to work daily with her dad Frank (Troy Kotsur, "The Number 23") and brother Leo (Daniel Durant) on their Gloucester fishing boat before she goes to school while her mom Jackie (Oscar winner Marlee Matlin) constantly requires her as a translator as the only hearing member of her family.  Ruby is a “CODA.”

CODA stands for ‘child of deaf adults, a situation writer/director Sian Heder ("Tallulah") explores not only from the ironic perspective of the coming-of-age woman whose passion for singing will never be fully understood by her family, but with an even appreciation for the stresses this puts on both sides of the hearing equation.  The film does follow some familiar territory with its shy romance impeded by misunderstandings and the inspirational teacher who gives Ruby the spotlight.  It also suffers some tonal bumps with its shifts from broad comedy to moving drama.  But Heder tackles her main theme so well from so many directions, these are quibbles.

The very first shot of Ruby finds her singing along to the radio aboard the family boat as they haul in and triage their catch.  After haggling with the Salgado’s broker who’s trying to undercut Leo, himself annoyed by her meddling, she bikes to school where she’ll fall asleep in class.  She’s embarrassed when her parents arrive in their pickup, the blaring music calling everyone’s attention, then again as she must translate both of their symptoms to a family doctor who diagnoses jock itch and prescribes dry underwear and no sex for a couple of weeks.  Ruby has a little fun with this last bit, much to her lusty parents’ horror.

Ruby will also turn tail and run out of class when music teacher Bernardo Villalobos (Eugenio Derbez, "How To Be a Latin Lover") has each choir member sing separately, still smarting over years of bullying endured because of her family.  When she does sing for him, privately, he pairs her up with Miles ("Sing Street's" Ferdia Walsh-Peelo) for a duet at the school show.

The film’s major conflict is that just as Ruby is literally finding her voice, ‘Mr. B’ encouraging and coaching her towards a Berklee School of Music scholarship, her family’s business is being threatened, not only by enforced limits and lowered income but by the lack of a hearing person on the boat.  While the burgeoning romance with Miles is weak tea (although it does allow for further embarrassment when Frank makes assumptions and mimes the life cycle of a condom), Heder excels in the way she fleshes out Ruby’s relationship with every member of her family, each with its own rewards and issues.  Most satisfying is the one between Ruby and her dad, who goes the extra mile to try to understand the joy singing brings to his daughter.

It is encouraging that less than a year after the last film to tackle deafness using hearing impaired actors (“Sound of Metal,” coincidentally also shot in Massachusetts), that “CODA” takes the same approach and if Paul Raci’s name recognition shot up, the same should happen with Troy Kotsur, whose father-daughter connection with Jones is the film’s best element.   That’s not to slight Matlin, who is also very good here, her character’s relationship with her daughter shaded slightly more selfishly if no less complexly.  Durant ably conveys his mixed feelings of admiration and resentment towards his character’s sister while also enjoying the comedic come-ons of Gertie.  Jones is the anchor, conveying all kinds of emotions in every direction as well as the development of her voice.  Derbez, who bears an uncanny resemblance to a younger Billy Bob Thornton, helps keep the schmaltz at bay in a role which easily could have succumbed to it.

“CODA” is a huge crowd pleaser which will also enlighten the hearing public with humor and well earned heart.  If it is not quite a masterpiece, it is only due to Heder’s all encompassing ambition to produce a multi-faceted portrait of her heroine.  Her climax is an absolute knockout, her coda more conventional and that all evens out to a movie only the most cantankerous killjoy won’t enjoy.

We meet Ruby Rossi (Emilia Jones) working hard and singing her heart out aboard the family fishing trawler out of Gloucester. She is also a high school senior and must juggle school, work and her real desire to sing. Her family, though, is deaf and she is their cultural link to the hearing world as a “CODA.”

CODA means “child of deaf adults” and writer-director Sian Heeder, with her talented young star Emilia Jones, brings home what that term actually means to the only hearing child in a hard working family, all deaf. For Ruby, it means she is the intersection between her family and the overwhelmingly hearing community outside of her home.

Her passion for singing is strong, though, and on a whim and a hope, she joins the school choir. At first, the reticent Ruby is reluctant to be anything more than background and the conductor, Bernardo Villalobos (Eugenio Debez), challenges her to come to the front and find her voice. He sees that she really is a talented singer and has a chance to help her get a scholarship to the Berklee College of Music in Boston.

This becomes a unique character study of Ruby, a young woman living in two very different worlds, one hearing and one in silence. All of her life, she has been the family interface with the hearing world and, if you just think about it, this is a daunting task for anyone, especially a teen at the brink of being an adult.

There are several parts assembled for the total story of “CODA.” The obvious one, about Ruby and her deaf family, is given full dimension in the hearing-impaired performances by Troy Kotsur as her dad, Frank, Marlee Matlin as her mom, Jackie, and Daniel Durant as her brother Leo. Each of this tiny ensemble family of four helps create a believable, working class life of deaf culture.

Then, there is Ruby’s voice and the possibility to pursue a singing career. Oh, and there is Miles (Ferdia Walsh-Peelo), a cute guy in her choir class who Bernardo pairs with Ruby for a duet for the big school performance. Sure, there are the requisite cute moments, usually with Ruby and Miles. But there is also young teen’s angst in trying to do right by her family – a daunting task for someone so young – while striving to do what matters most to her.

“CODA” is one of the best coming of age stories to come down the pike in a long time and it showcases Emilia Jones with her fine and assured performance. It also should spawn another film about the Rossi family, IMHO.