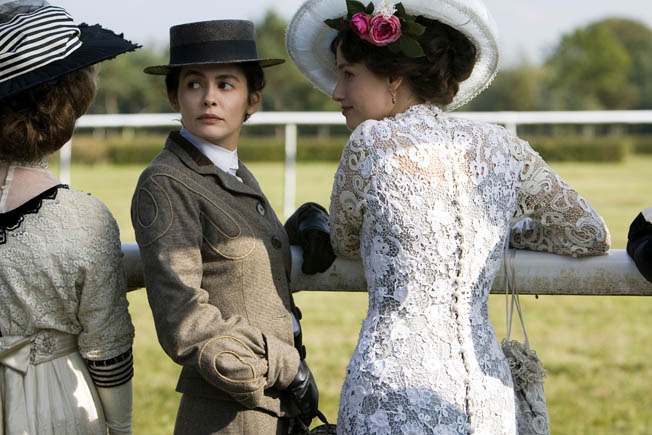 In the late 1800's, a farmer leaves his two young girls at an orphanage and never returns. At the turn of the century, Gabrielle (Audrey 'Amelie' Tautou) and her younger sister Adrienne (Marie Gillain, "Safe Conduct," "L'Enfer") scrape together a living by singing in a local saloon where they both meet rich, influential men. Adrienne leaves, believing her Baron's promise of marriage while Gabrielle ties herself to wealthy hedonist Étienne Balsan (Benoît Poelvoorde, "Man Bites Dog"), who lives in a chateau just outside of Paris. These were the years of "Coco before Chanel."

In looking back at the formative history of fashion designer Coco Chanel, writer/director Anne Fontaine ("Nathalie," "The Girl from Monaco") has produced a biopic that is two thirds soap opera and one third character study. Star Tautou, who bears a striking resemblance to the real Chanel right down to her diminutive size, makes Coco stubborn and stormy, a woman who went against the conventional tide, but even her well worked out performance cannot save the film's last act, when Coco falls for the handsome Arthur 'Boy' Capel (Alessandro Nivola, "Junebug," "The Eye") for what appears to be no other reason than the fact that he's good looking and not afraid to be seen with her in public. When Gabrielle is introduced to the Baron's friend Balsan, she refuses to flirt and so gets his attention. He is the one who dubs her 'Coco,' after the song about a lost little dog that comprises her and her sister's act. When he promises to get the sisters an audition at a club in Paris, Gabrielle becomes more accommodating, but her sister leaves the act to follow her Baron and Gabrielle is unsuccessful on her own. Balsan leaves to return to his home. With only her sewing to support her, Gabrielle packs a bag and shows up at Balsan's estate where he somewhat reluctantly takes her in. He keeps her as a closeted mistress, abandoning her to the lawn at a horse race while he ascends to his box. Here she finds her sister in lacy finery from the Baron, a startling contrast to her tweed suit and straw hat (cinematographer Christophe Beaucarne does a fine job contrasting textures and patterns within his frame). When Balsan expects a houseful of guests, he arranges for a carriage to take Gabrielle to the station, but she digs in her heels and becomes fast friends with Balsan's lover Emilienne d'Alençon (Emmanuelle Devos, "Kings and Queen," "A Christmas Tale"), a famous actress with a daring lifestyle who begins to favor Coco's straw hats over her heavier, feathered and froufrou'd chapeaux. Another guest, Boy Chapel, first spies Coco with her long hair hanging down her back clad in silk men's pajamas and bare feet (Tautou actually recalls Yoko Ono here!). He declares her elegant and his continued support of her unconventional style is a refreshing difference from Balsan's more amusedly condescending treatment. Chapel gains Coco heart, finally makes Balsan realize what he has, but marries another. Still they continue their affair and he finances the beginning of her career - a millinery designer and shop owner - until his untimely and tragic death. Fontaine does little to root Chanel's future career in her past. We see an orphanage dress make an appearance later as a costume for Emilienne. Gabrielle and Adrienne's plain shirtdresses are accounted for more by poverty than choice and there is no real motivating factor for Coco's fascination with menswear. Her cross dressing (she wears pants and refuses to ride Balsan's horses sidesaddle) is treated here more as an "Annie Hall" type statement than a deeper exploration of possible bisexuality. That subject comes up exactly once in a saucy exchange at a picnic. Fontaine has Coco continuously voice her disdain for overly adorned females and for the restrictive undergarments of the time, but again, it's not clear where these ideas are coming from. The film's final scene, the presentation of a Chanel collection decades later, is a wasted opportunity to tie Chanel's clothes to her past (as well as feeling tacked on, a bit of Coco after Chanel to explain to those befuddled by the Chanel bit presumably). Tautou manages to fill in between the lines as much as she can with her prickly performance and she receives beautiful support from Poelvoorde, who represents everything she is chafing against. He's affecting as he comes around to the depth of his feelings for the strange little Coco who amuses his guests. Nivola, though, is too smooth by half, a cad whose true feelings for Coco appear skin deep. The film's period production design is lush without seeming Hollywoodized, complemented by a lovely Alexandre Desplat ("Chéri," "Julie & Julia") score. Costume Design by Catherine Leterrier ("Friday Night," "Changing Times") is exquisite without appearing of modern manufacture. Coco's manish outfits really look like redesigned menswear and the period gowns look like real couture. "Coco before Chanel" is a beautiful production featuring a strong performance from Tautou, but Fontaine doesn't dig deeply enough into what really inspired the woman who became Chanel.